The troubled birth of American Psycho 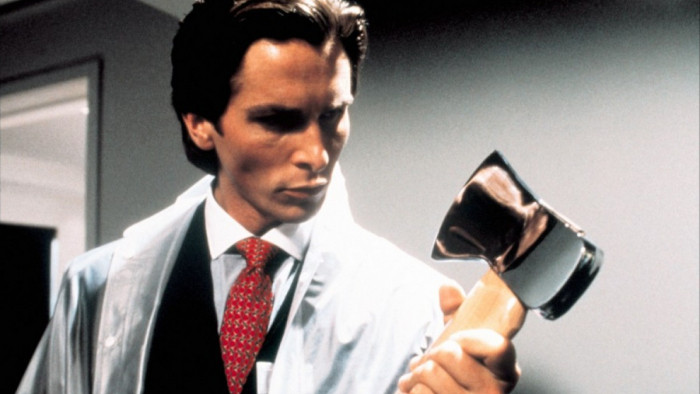 A group of young alpha executives are sitting around a boardroom table in a swanky New York office. With uniform slicked-back hair, pressed Armani suits and Oliver Peoples frames, they resemble swaggering yuppie robots. And as the conversation bounces aimlessly around, one of the clones reaches into his jacket pocket.

The camera (because this is a film) closes in and he pulls out a silver box, before flipping it open decisively. From inside he retrieves a business card and slides it purposefully across the table for his colleagues to see. As the first signs of a smug grin form on the man’s chiselled face, he informs the group that he’d “picked them up from the printers yesterday”.

Again we get a fetishistic close-up – this time of the card. In a font we’re told is Silian Rail, it reads ‘Patrick Bateman’. Forget the naked chainsaw scene, the axe-murder of Jared Leto to a soundtrack of Huey Lewis & The News or even the dialogue about Phil Collins’ career (“In Too Deep is the most moving pop song of the Eighties”) delivered straight-faced to a pair of dumb-struck prostitutes.

If there’s one moment in American Psycho that sums up the film’s utter greatness, it’s the business card scene. On the one hand, parodying the narcissism of Eighties yuppies, on the other, lending an insight into the warped psyche of the film’s protagonist, this is surely the moment that turned a generation of men into clothes-obsessed wannabe Batemans. And 21 years after the film was first released, it’s certainly one of the reasons why this darkly hilarious Wall Street satire, based on the Bret Easton Ellis novel, is considered a cult classic and one of the greatest films of the past decade. So it may surprise you to hear that it almost didn’t get made at all.

Panned by critics on release for its subject matter, rejected by cinemagoers (the $8m [£5.2m] film made only $15m at the US box office) and featuring an unknown former child star as its lead, it’s surprising anyone remembers the film at all. Yet, in fact, the outrage surrounding the story began some 10 years previous – even before the original book was published.

Ellis’s novel was supposed to have been printed by Simon & Schuster in March 1991. The publishing company had given the already notorious author a $300,000 advance, but backed out after seeing the final manuscript with its detailed descriptions of grisly murders and sex. Vintage Books picked it up, but the work was never issued as a hardback in the US, and was banned in several countries after being denounced by the likes of US feminist Gloria Steinem, who believed it glamorised violence towards women.

Aside from the subject matter, the book lacked a real narrative; some entire chapters simply listed grooming products. In effect, it was considered unfilmable. Nevertheless, veteran film producer Ed Pressman saw potential. He read it in 1992, as the LA riots lit up the skies above his house in the Hollywood Hills. “In that context, it was very affecting,” he recalls. However, figuring out how to adapt it for the screen was far from straightforward.

After some negotiation, Pressman struck a deal with the film studio Lionsgate, and Johnny Depp became informally attached to the project. Slasher director Stuart Gordon (Re-Animator) was considered at first, then surrealist horror director David Cronenberg. Scripts were drawn up, including one by Ellis himself which, according to Pressman, was “completely pornographic and ended with a musical number”. Depp dropped out and Brad Pitt was lined up. Then Cronenberg left.

Soon after, in 1996, the producers approached Mary Harron. “My first reaction was, ‘I’m not sure you can make a movie of American Psycho, but I’ll take a look at the script,’” she tells ShortList. “My second thought was that just enough time had passed that you could make a period film about the Eighties. I admired the novel when it came out; I thought it was very funny and misunderstood.” Harron’s take played up the comedy and the ludicrous aspects of Wall Street traders. Pressman was delighted.

“It wasn’t until we met with Mary that [the film] made sense,” he says. She decided the man to play Patrick Bateman was Christian Bale. At the time the future Batman was just a minor actor, most famous for his part in Steven Spielberg’s Empire Of The Sun in 1987 when he was 13.

Bale said one of the main reasons he believes she picked him was because “being British, I’d have an understanding of the class system, viewing Bateman as a member of the American upper class. He is the image of the American Dream of glamour, wealth, sophistication, this charmed life. But if you look closer it’s not charmed, it’s absolutely soulless.” Bale agreed to the role and Harron had her lead, but Lionsgate was not happy. It wanted a Hollywood name and, at the time, Bale was nowhere near that.

Harron remembers attending endless pitch meetings in order to assert her vision for the film. “In one of them one of the executives asked me something like, ‘How is this film going to make the world a better place?’” she says. “As if we should try to make it more life-enhancing.” Meanwhile, behind Harron’s back, Lionsgate slipped Leonardo DiCaprio a script. In 1997 he was white-hot, after Titanic broke all box-office records. DiCaprio agreed and Lionsgate formally issued a press release announcing the star’s signing at Cannes in May 1998.

Pressman, who had ceded a fair amount of control to the studio by his point, recalls the document being drawn-up at Cannes, in a room at The Carlton Hotel. “Leonardo was such a star,” he says. “Suddenly, every distributor around the world was bidding for it. Lionsgate would have been able to raise $50m to $60m.” Harron was appalled, though.

“Leonardo wasn’t remotely right,” she says. “He brought way too much baggage with him – I did not want to deal with someone who had a 13-year-old fanbase. They shouldn’t see the movie. It could’ve got us in a lot of trouble.” The director refused to even meet with DiCaprio and as a result she was dumped from the project. DiCaprio requested Danny Boyle or Martin Scorsese. He got Oliver Stone, only a few years after his Natural Born Killers. Yet the pair couldn’t make the film work. “Leo was looking for solutions to things that weren’t problems when he started,” Pressman says. “As time went on, more and more questions came into Leo’s mind.”

This wasn’t the only hold-up. DiCaprio’s attachment to the film was starting to attract unwanted criticism from the feminist movement, which damned the star for even considering such a role. Not for the first time, it all looked bleak for the project. But then came a stroke of luck: DiCaprio backed out. This retreat allowed Harron and Bale back into the picture, now with a cut-price budget of $10m.

Bret Easton Ellis wasn’t too happy about this – “Mary was going to have to cut $4m out of the budget if she wasn’t going to cast a major star,” said the author later. “And I thought, Bale? He’s Welsh! And wasn’t he that kid in that Spielberg movie?” Yet despite all these hiccups, shooting finally began in March 1999.

Which brings us back to the present day. It’s difficult to underestimate the influence of the film. Not only a groundbreaking adaptation, in many ways it also prefigured the rise of the metrosexual, inspiring men everywhere to fetishise designer clothes and aspire to a gym-toned physique – but without decapitating prostitutes with a chain saw. And for director Harron, this is the reason why its appeal has risen so steadily – reflecting, as it does, the shallow, glossy era we are living in.

“Its reputation has changed remarkably,” says Harron, who has since worked with Pressman again on an adaptation of the equally controversial novel The Moth Diaries. “I am very surprised by the impact it has had, particularly on young people. A few days ago I was in Starbucks. I gave the girl behind the counter my credit card and she looked at it and said, ‘You made my favourite film.’”

Pressman concurs, though he’s found the film’s audience stretches far beyond coffee-counter girls. “When people say that a film I worked on affected them, they almost always say it was American Psycho or Wall Street. And they’re usually urban alpha males, that somehow identified with Bateman or with [Gordon] Gekko [played by Michael Douglas in Wall Street], even though,” he notes, “they’re really villains.”