The new Xbox One console has no disc drive

Your discs ain’t no good here 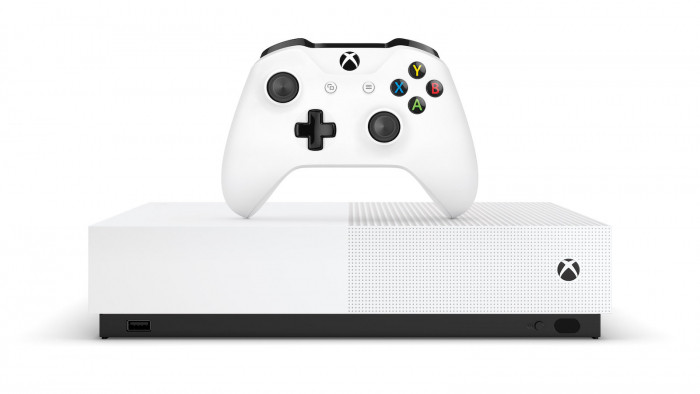 If you’ve always thought having a somewhere to put your best Xbox One games discs you’ve been collecting was a bit 20th Century, Microsoft has the product for you. It just unveiled the Xbox One S All-Digital Edition, which is a bit of a mouthful that could have done with a bit more brainstorming, as names go.

It’s the same Xbox One S you know and love, only there’s no disc drive. That’s literally the only difference: in fact, it looks like somebody has just painted over the black bar where disks used to live.

That means you won’t be able to play 4K Blu Rays, regular Blu Rays, DVDs or, most importantly, disc-based games. Instead Microsoft banks on you downloading games directly from the store at whatever price it sets or – more likely – investing in Microsoft Game Pass. It is a subscription service that gives you a whole load of games on demand for a monthly fee.

Of course, you can do that with disc-based Xboxes, so why would you sacrifice the disk drive? Well it’s $50 cheaper than the regular Xbox S, and Microsoft says it will always keep this price advantage in the event of any sales.

To be honest, you could probably save that much money just by buying pre-owned games, especially when you consider the huge archive of backwards-compatible Xbox 360 games. But there’s something to be said about both reducing clutter and avoiding the need to get up and change disks. Plus, to sweeten the deal you get Sea of Thieves, Forza Horizon 3 and Minecraft pre installed and ready to go.

No UK pricing yet, but taking the $250 US RRP into account, it’s likely you’ll be able to grab an All-Digital Edition Xbox One S for under £200 at launch and around £140 when on sale. Not as cheap as we were hoping this late in the console life cycle, but still cheaper than the upcoming PS5…