The Knight Before Christmas trailer: Vanessa Hudgens stars in yet another Christmas cracker

Bring on the Christmas cheese! 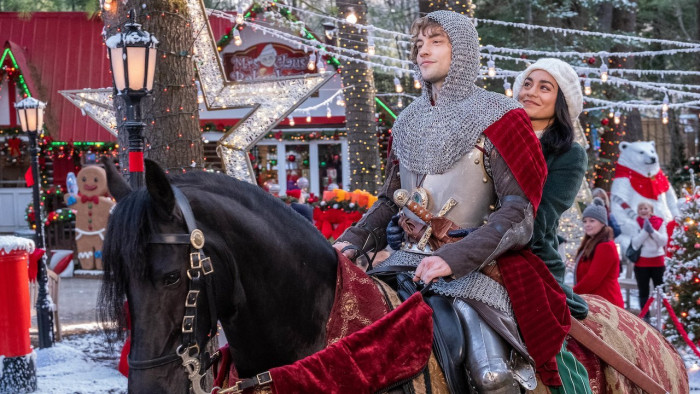 Is it really Christmas if you don’t watch at least one ultra-cringey festive film? Well, Netflix has certainly made sure that you have your fill of them - and we’re only exaggerating a little when we say that Vanessa Hudgens (yes, of High School Musical fame) stars in most of them.

By this point, Hudgen’s life must be 99% Christmas (and who can blame her) because not only is she returning for the sequel of last year’s The Princess Switch - in which she’ll play three versions of herself - she’s also about to fall in love with a medieval knight (surrounded by the magic of Christmas, of course).

The Knight Before Christmas follows a 14th century knight (Josh Whitehouse) who has been transported to modern-day Ohio by a sorceress.

When he arrives, he ends up befriending science teacher Brooke (Hudgens) who decides to help him navigate the world of cars, radios and modern-day clothing - oh, and of course, in the process they fall in love. (It’s a Christmas film, how could it end any other way?!)

So why does it matter that it’s Christmas? If we’re being honest, it doesn’t - the Christmas decorations, wooly hats and winter jumpers simply add to the cheesiness of it all.

And, rest assured, if you love cheese, then you’re in for an absolute feast with this one. Plus, the festive theme makes for a cracking title.

Will it become a Christmas classic? Probably not. But Netflix will just be hoping to avoid the fate of Last Christmas - a rom-com in which George Michael’s music collides with the festive period.

It’s fair to say the film starring the likes of Emilia Clarke, Emma Thompson and Henry Golding (Crazy Rich Asians) has not been well-received.

Rolling Stone’s David Fear even described it as the example for “when holiday movies go very, very wrong”, before adding: “Last Christmas is bad. Incredibly, shockingly, monumentally bad. The kind of bad that falls somewhere between finding a lump of coal in your stocking and discovering one painfully lodged in your rectum.” (ouch - we don’t think David is a fan).

If that hasn’t dampened your Christmas spirit, The Knight Before Christmas will premiere on Netflix from 21 November.