The 10 greatest moments from The Godfather Trilogy 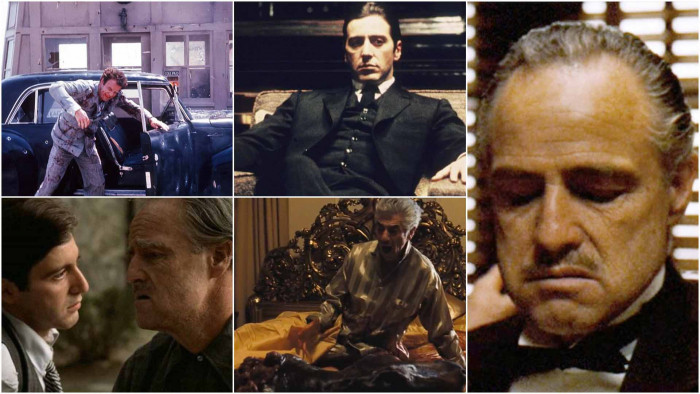 It's been 50 years since The Godfather debuted in cinemas. It was widely released in US cinemas 24 March 1972, hitting the UK in August of the same year.

The film and its sequel (alas, not the third movie) are lauded as some of the greatest movies of all time - and for good reason: they are both portraits of stunning, epic and timeless storytelling.

To celebrate, we have put together what we think are the 10 best moments from The Godfather Trilogy.

But first, quick quiz: What's the total running time of all three Godfather movies combined? Pick a figure. Ask the person next to you. Make it a competition.

Got an answer? Good.

But the answer is 548 minutes of brilliance. That's over nine hours of movie history that we have had to condense to just 10 snippets.

We make it sound like a chore but, of course, it was a sheer joy to research.

It's a cruel truth but we reckon you, like us, don't remember the first moment you saw Marlon Brando as The Godfather. That's the only reason this scene isn't further up the list. So embedded in culture is it, that it's become hard to grasp how impactful it must have been to see him, jawline jutting forward, in all his glory, in the opening seconds of this movie. Still, it's an incredible scene and one in which the cat was only introduced seconds before the cameras rolled, when Francis Ford Coppola dropped it into an unexpecting Marlon Brando's lap. Needless to say, Marlon ran with it. Not literally.

9. It was an abortion (The Godfather: Part II)

This is the hardest scene to watch, absolutely no question, in any of the films. And that takes some doing given the countless killings and the equine decapitation in the trilogy. When Kay admits she had an abortion to avoid bringing another son into Michael's criminal family, the sheer pain in both characters weighs agonisingly on the viewer. "It was a son and I had it killed," she wails. Then Michael's pain transfers into an explosion of anger. Brilliantly acted. Horrendous to witness.

8. Killing Of Sonny (The Godfather)

Death scenes are something of a theme in this list, but none are as unequivocal as this monstrous moment where tommy gun clips are emptied by a dozen mobsters into one tragic Sonny. The sheer volume of the scene means that the ring of rattling firearms lasts long after Sonny is downed and booted. We can only imagine what it would have been like to witness this, in a cinema, in 1972.

If you make it into the lexicon of Sopranos legend Silvio Dante (see here), then you have made the big time, in our book. This oft-mimicked 5 seconds of brilliance was nominated for the AFI's 100 best ever lines in film but, in our opinion, incorrectly missed out.

The real beauty comes when you apply it to your own life and quote it to friends at the most mundane of non-gangster-type moments. Like, for example, when they convince you to stay at the bar when, before, you were adamant you were on your last drink. Guaranteed chuckles.

6. Make him an offer (The Godfather)

You can't really argue with the American Film Institute who, to celebrate the 100 greatest movie quotes in 100 years of movies, put this instance second, after Gone With The Wind's "Frankly, my dear, I don't give a damn. The 'offer he can't refuse' line is used in all three Godfather films, but varies slightly throughout. Marlon spent three hours in make-up, every day, being fitted with the steel-bar dentures that make that jawline, by the way. They're on display at the American Museum of the Moving Image in Queens, New York. See it here.

5. It's strictly business (The Godfather)

A gripping scene from start to finish, it's actually the final seconds that engage us the most. Look into Pacino's eyes as he mutters the line "It's not personal, Sonny. It's strictly business" and you get an icy snapshot of the cold-killing Michael Corleone - a true Godfather in the making.

More than 20 years after Don Ciccio murdered Vito's father, Antonio Andolini, after the hot-headed Andolini refused to give tribute, Vito exacts revenge. For us it's all about the knife. If your stomach doesn't twitch when you watch this you may want to check your pulse. It's the way he lifts the knife through the gut. Oh lordy. Robert De Niro, of course, won the Oscar for Best Supporting Actor for his portrayal of Vito.

3. The Murder of Don Fanucci (The Godfather: Part II)

Tap-tap-tap-tap... Tap-tap-tap-tap. Consider, for a moment, directorial genius behind having Vito Corleone light up in his darkened corner as Fanucci taps the tampered-with lightbulb. The amount of time Fanucci remains standing after the bullet penetrates his face and his nervous system begins to close off is utterly excruciating. And the coolness of Vito's now flaming cloth silencer, after the deed is done. Bravo.

2. The Horse's Head (The Godfather)

The first time we saw it was quite unlike any other moment in any other film. Emotionally, we mean. Utterly repulsive and terrifying. The reaction of actor John Marley who, during rehearsals would "wake up" to find a fake horses head in bed with him, is totally believable because he had no idea it would be a real head when the cameras rolled. Oh, and this image of Marley relaxing on set, with the head, is worth a quick look.

1. The Shooting Of McCluskey And Sollozzo (The Godfather)

The stomach-pummelling, nerve-shredding tension created by Francis Ford Coppola makes it a truly tough watch. The director layers this scene with tension. Oh god, why's the gun not there? (A train goes past) Michael's head doesn't seem right, why's he paused on his way out of the washroom? (Another train - louder this time) Can he go through with it? He sits back at the table. Sollozzo speaks in Italian. What's he saying? What the hell is he saying? Why's Michael not responding? Michael's eyes are darting about the table. What's he thinking? (An even louder train, brakes screeching against metal). The camera pans in on Michael's face. The noise gets louder, the tension mounts as the train reaches as almost unbearable pitch, then BANG!

Bloody hell, you think. That's a scene and a half.

You can currently catch all three Godfather films on the big screen at BFI Southbank, as part of its ongoing Pacino season; Bfi.org.uk