Simon Vaisey has a personal reason for the challenge 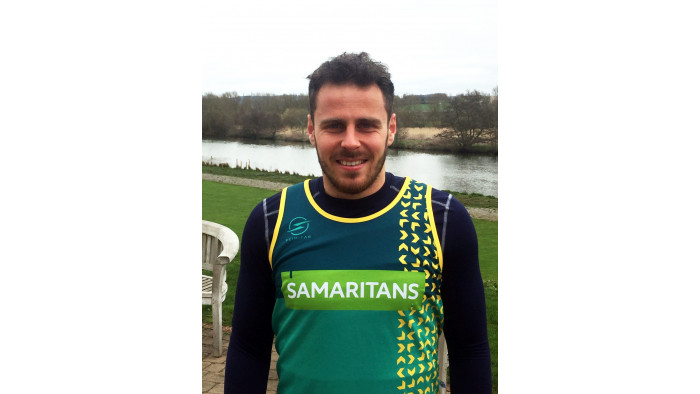 If you’ve ever watched the London Marathon, or the Great North Run, or any televised long-distance event open to the public, you’ll have seen countless runners in unique vests, highlighting the cause for which they are running.

Perhaps you’ve even run one of these yourself, and struck up a conversation with a fellow runner, learning more about a subject close to their heart.

Some people might remain in the zone, reluctant to speak to anyone for fear of disrupting their preparations, but if you see Simon Vaisey at the starting line then he’d welcome a chat.

Vaisey, a PE teacher from Oxford, is running 50 marathons and half-marathons in as many weeks to raise money for Samaritans.

His journey began in September 2018 and will end with the 2019 Great North Run, incorporating the London Marathon just after the midway point and various races in several different countries.

While some people supporting Samaritans might do so due to someone close to them, in Vaisey’s case he has chosen the charity to thank them for the work they did for him directly when he was a first-year student at university.

“I had a bit of a bad spell and used their services and signed up with the aim of volunteering with them,” he tells ShortList.

“Because I finished uni I didn’t end up volunteering, but in my fourth year I wanted to do something with them. I was thinking after I graduated maybe I’d try to do a few marathons in a few days, but then I thought I should do something crazy so let’s give it a go.”

Blue Monday isn't real, and its existence harms the conversation around mental health

When I speak to Vaisey over Skype, he is wearing his 50 in 50 t-shirt, and is approaching the midway point of his challenge. London will be number 28 or 29 – he reveals he may need to update his schedule after an event in Malta was cancelled due to bad weather – and he also has a midnight marathon on the horizon.

He urges other runners to say hello, having himself been inspired to take up the ambitious undertaking after encountering endurance athlete Nick Butter, who has set out to run a marathon in every country in the world. Vaisey’s target is a little more modest, but he’s still found plenty of enthusiasm from those who have seen him at the starting line.

“It’s great talking about it, and sharing some of my experiences,” he says.

“I’ve had people ask me how many I am into the 50, and they’re going past and saying well done. It’s really cool, because if I was wearing a normal t-shirt they probably wouldn’t even have a clue. Obviously I’ve had a few donations from the t-shirt too, which is quite nice; I went to Gloucester and did a marathon there, and when I’d finished I had a £50 donation from someone who was watching at the event, just because they saw my t-shirt.

“Even though I’ve done quite a few I’m still quite new to running and it’s good to hear other people’s stories as well. There’s loads of other people out there doing cool challenges that people don’t even know about.”

Vaisey reveals colleagues have spoken to him about their friends and family receiving support when struggling with mental health at university – the sort of support which he felt wasn’t available when he was younger – and notes that even when people have strong support networks close to them there can still be value in having someone else to speak to.

He argues this is especially valuable for university students, whose general experience can be a little detached from real life, especially for those living away from home for the first time and potentially being overwhelmed by all the changes. Not to mention the pressure to have a great time after hearing stories about students describing their time at university as the best years of their life.

“It was the fact that I didn’t really want to bother my family too much. It’s different speaking with someone you know, not because they’re judging you but because they’re probably worried,” he says.

You might think all of this would make it easier for Vaisey to talk about mental health, but even for him it hasn’t been entirely straightforward.

He describes himself as “quite a happy guy” in how he appears to others, to the point that a few of his colleagues were taken by surprise when they learned about the inspiration behind the challenge, but there are still some unexpected positives to have come out of it – not least the way it has allowed others to open up to him about their experiences.

“I still find it hard to talk about sometimes, so I do feel there’s still quite a lot of stigma out there and some people probably do still feel quite embarrassed about it,” he says.

“So that’s something that needs to be changed as well, because there’s people that if you haven’t got a clue what they’re going through and they’re just going about their normal lives, they’re probably going through a hard time and just don’t want to tell anyone.”

Before beginning his Run50 challenge, Vaisey had only ever run one marathon and a handful of halves, but he’s well on the way to hitting his target.

At the time of writing, he’s almost two thirds of the way to his £3,000 fundraising target too.

If you spot him in the field in London, or anywhere else, don’t be afraid to say hi.