Take it for a spin 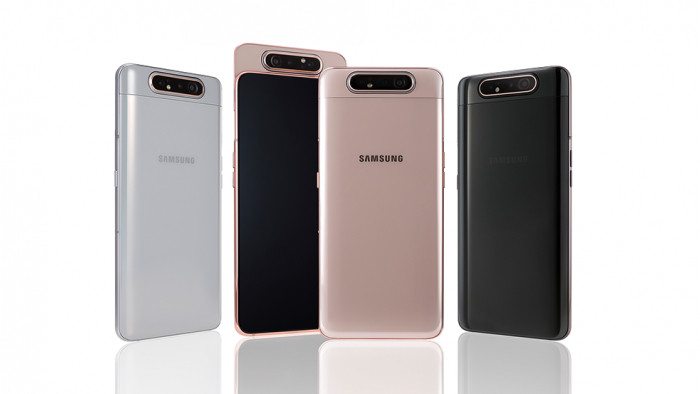 Once it was an exciting development to always have a camera in your pocket, now the average handset has between two and six.

Overlooking the fact that our lives aren’t interesting enough to justify this technology, it would be nice if there were a way of keeping the functionality while cutting the cost. Surprisingly it’s Samsung – creator of the £799 Galaxy S10 – that has come up with a neat solution: using the same cameras for front and back with a clever spinning mechanism.

Actually, the Galaxy A80 combines two clever design twists. To ensure the screen occupies the maximum space, the camera array is hidden away in a sliding mechanism. When required, it pops up, and the camera can then spin around to face the front or back.

Not only does this mean you get the equivalent of six lenses for the price of three, but it means that the quality of selfies will match the shots taken by the main camera. That should be a plus, though some of us favour the slightly blurrier selfie pictures as a way of taking off a few years without the need for cosmetic surgery.

The triple camera-array consists of a 48-megapixel main lens, supported by an 8-megapixel ultra wide snapper and another 8-megapixel 3D time-of-flight camera.

The flip side (pun not intended, but we’re claiming it anyway) to this clever design is that more moving parts mean more things that can go wrong. Although we’re quite sure Samsung will have stress tested this, it’s probably worth taking out insurance just to be on the safe side.

It’ll set you back £550 when it launches on May 29, and if you’re wondering why it’s so much cheaper than the top end Galaxies, it’s because the A80 is quite a bit weaker internally. The 6.7-inch device has a FHD+ screen, and a mid-range octa-core Exynos chipset with 8GB RAM.

It’ll be no slouch then, but if speed it your top priority, you’ll have to dig a little deeper…