The Servant star reveals all about the new Apple TV Plus show and his love of thrillers. 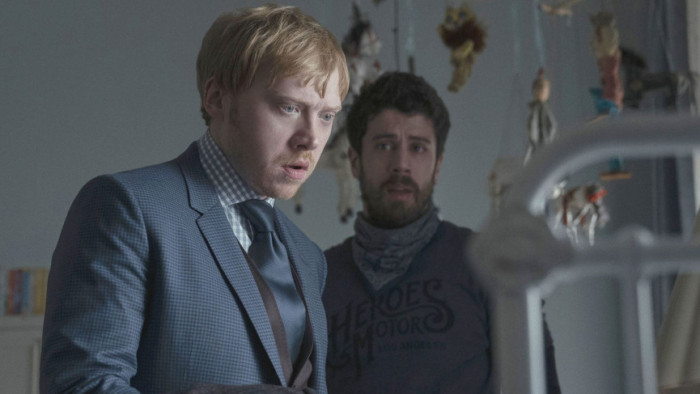 Rupert Grint returns to the small-screen in Apple TV Plus' new psychological thriller Servant and it is quite the tense ride.

The weird thing is, Jericho is actually a doll who was given to Dorothy as a coping mechanism after the death of their son but in Leanne's care, he comes back to life.

Grint plays Dorothy's brother Julian, heavy drinking finance guy who is not at all cool about the new nanny's influence on his sister or their home.

"I just loved the fact that this series was so contained and the action never really leave this house because it amplifies all the weirdness going on," the actor told Shortlist.

"It's kind of this surreal, parallel universe that these characters live in and then my character Julian sits in a very different place because he doesn't live in the house."

"He's a funny one because he's just this very brash, in your face, no-nonsense Wall Street guy and no one really knows what he does," Grint said of his character. "He's the kind of person you'd want in a crisis and he's Sean's only friend and confidante, so he's good in that kind of situational thing but slowly unravels when Leanne comes into the mix."

To celebrate the release of the new series, executive produced by M. Night Shyamalan, the Harry Potter star shared with Shortlist some of his favourite thrillers from film and television.

Servant is available to stream on Apple TV+ now

“I've always been a fan of M. Night Shyamalan. I love all of his work but The Sixth Sense I’d say, is kind of the obvious choice, but that’s a film that really stayed with me. I never saw it coming.
He’s just a master. He just knows how to get under your skin and it's incredible to watch him work as well. The level of detail that he works with is incredible. For Servant, he drew these storyboards for nearly every single shot. It’s amazing.
[Shortlist: The Sixth Sense is an interior movie like the show and the cinematography is rather similar]
"Yeah, it's a similar kind of vibe and it's a great way to work because you can just stay in it for so much longer. And some of the takes we were doing were maybe six minutes long, which feels like forever. It made it feel like you're doing theatre. It was very choreographed, especially doing these kinds of sweeping moves that go into four different rooms in the house. You have to know your route but it still feels quite free as well. Sometimes you're really playing to the camera but sometimes you can do different things because it doesn’t matter if things happen outside of the frame.”

2. The Haunting of Hill House

“I loved The Haunting of Hill House. I absolutely ripped through that series. It's kind of similar to our show as it’s got this foreboding thing and the fear, this real primal fear. I mean, I'm not a dad but babies are such precious things and I think it really taps into that primal instinct. The sibling relationship is interesting too, like in our show. In a bigger way, you don't really know a lot about that family. You meet the dad but it's all very mysterious. It makes you question everything and also if you put yourself in that situation, it makes you think about what you would do which is a fun thing to talk about.”

“I love true crime, really love anything to do with the murder, and I watch true crime documentaries. I also watch The Forensic Files I think there are thousands and I’ve watched most of them. They are really short and some of these murder cases are absolutely horrific. They go into so much forensic detail about like, the soil found in the tire treads so it can only be from this one car, this one suspect. Yeah, I’d love to be a forensic investigator.”

“I love Twin Peaks, the original series as I haven't seen the new one actually. The first one I love because I’m quite into surrealism as well as imagery that is quite dark and just weird.”

“I’ve dressed up as Alex from A Clockwork Orange a few times for Halloween. I’m a big Kubrick fan. It’s quite a good one to do, a bit of mascara one of those jockstraps. The crew is called the Droogs. I’ve always been a fan of the darker side of humanity.”

“There are a few movies that have really stuck with me. There’s this really weird foreign language one called Little Otik about a baby and parents. I think it must come from an old fairytale as it’s about this family who is trying to conceive but they can’t so someone tells them to take a stump from the garden and do this Voodoo stuff so it becomes a real baby but then it starts eating a village."