An interview with two Generals from the Dark Side. 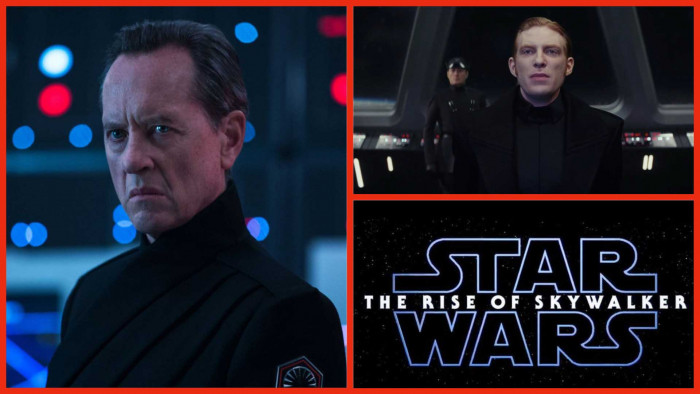 By Hanna Flint
20 December 2019
The Rise of Skywalker completes the legacy trilogy as well as the nine-movie Skywalker saga but it wouldn’t be a Star Wars movie without some diabolical villains to deal with.
Domhnall Gleeson makes his return as General Hux, who still has his tail between his legs after Kylo Ren killed his way to the top job of Supreme Leader. He’s obviously not happy with the new pecking order.
Then there’s newcomer Richard E. Grant joining the franchise as General Pryde, another high-ranking officer in the First Order who is 100% not here for the Resistance’s bullshit!
So to celebrate the release of Episode 9, Grant and Gleeson sat down for a quick chat with Shortlist to answer some fun, quickfire questions about the sci-fi franchise that’s been entertaining the world over for four decades….

What was your favourite scene?

Domhnall Gleeson (General Hux): "I'm an actor so it’s going to be one of the scenes that I'm in, I’m going to warn you straight away! So just me walking down the corridor. Why not?:
Richard E Grant (General Pryde): "Ordering the termination of various characters was extremely pleasurable to do let me tell you. The power of it."

If you had a lightsaber, what colour would it be and why?

Richard E Grant (General Pryde): Red, because it is my favourite colour.
Domhnall Gleeson (General Hux): Green for Ireland! Or a rainbow one that would be amazing.

If you could go on a space adventure with any character who would it be?

If you had a chance to play any other character which one would it be?

Richard E Grant (General Pryde): Princess Leia is his choice and I would be Han Solo.
Domhnall Gleeson (General Hux): We’d redo A New Hope right? Because it's just the start of everything and you don't know where it's going to go that way.

Who would you like to see a spin-off series for?

What is your favourite Star Wars movie and why?

Richard E Grant (General Pryde): Mine is the first one that I saw when I was 20 years old in 1977 because it created such a complete world in itself like I had never seen before in a movie and I loved that. And sustain you through 42 years.
Domhnall Gleeson (General Hux): Yeah, I'm gonna go with that as well. There’s something about the start of everything. There's a beauty to that. [To now be a part of that] it’s amazing. It's magic.

Final thing, if you had a choice between Yoda Yoda or Baby Yoda who would you pick?