The fab five are back for a third time 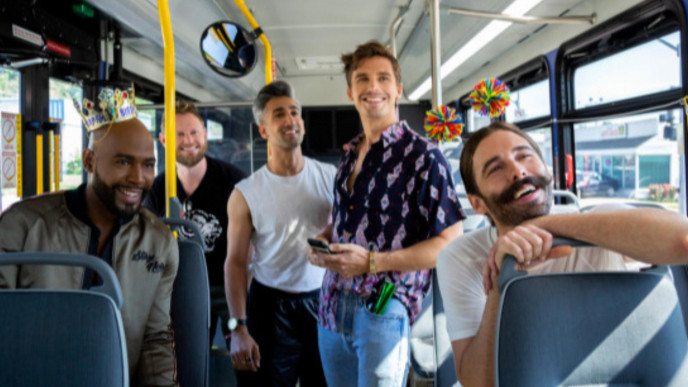 Tan, Jonathan, Antoni, Karamo and Bobby are back! They’re never away if you follow any of them on Instagram (our personal favourite is Jonathan - check out his new love for ice skating).

That’s right, the fab five are returning for a third series of Queer Eye on Netflix, premiering on March 15th. Their trailer also features a new song from Carly Rae Jepson called Now That I Found You.

The reboot of nineties show Queer Eye For The Straight Guy is now just called Queer Eye, and (in case you didn’t know) transforms people into their best self.

We can’t help feeling a tiny bit sorry for interiors guy Bobby, who has to renovate their entire house and garden in the same time that Karamo (culture) teaches them to love themselves, and Tan (fashion) tells them just to do a French tuck. So who will be on the next series? Will we find out how Karamo’s skin actually glows? And will JVN ever finish a word?

Here’s what we do know, the gang are moving from Georgia to Kansas for this series, so the men of Missouri are in for a treat. Speaking to Buzzfeed, a Netflix spokesperson said: “This season, these fearless ambassadors of taste are headed to Kansas City to bring their infectious brand of self-love, confidence and encouragement to a whole new roster of heroes.”

When will they come to the UK though? The men of Britain could do with a spruce and dust of the Queer Eye magic.

Not just that, but the boys also went to Japan to film a special, Queer Eye: We’re In Japan, where we’re told they’ll give their expertise to four Japanese men and women. This will be out later in the year.

To get you in the mood, here’s a compilation of Jonathan’s best bits:

Until then, it’s only one month to go until a whole new generation of gifs are born, count the days.

Most newsletters are rubbish. Our isn't.