Interview: Black Widow's OT Fagbenle on being part of the Marvel universe

Exclusive: We speak to the latest Marvel recruit. 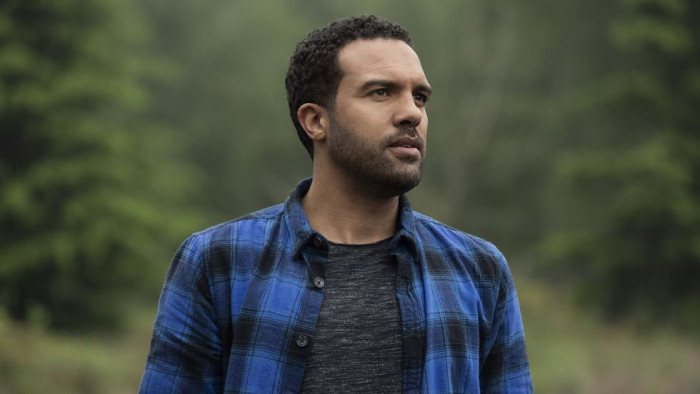 It's been a long time coming but Black Widow is finally out on the big screen. The movie is a brilliant, brutal look at the life of Natasha Romanoff (Scarlett Johansson) putting the final pieces in place for the character. If it's a swan song (and Kevin Feige has teased that it might not be) then it's a great one, full of new characters we haven't yet seen in the MCU.

One of these is Mason, played by OT Fagbenle. While it would be remiss to talk about specifics of the character (no spoilers here), he's a key part in the movie and there for Romanoff when she needs him to be.

It's a great character and one that Fagbenle - who can be also be seen in The Handmaid's Tale and will next be seen playing Barack Obama in an upcoming TV series The First Lady - is clearly having a lot of fun with.

We caught up with him recently and chatted about his arrival in the MCU and why he is passionate about making sure that representation is happening both in front and behind the camera...

ShortList: How do you feel about Black Widow finally coming out?
OT Fagbenle: Really good. More than anything, because we haven’t been able to have communal experiences - and everyone loves mass experiences - I’m really excited to be part of coming back into movie theatres and coming back to storytelling.

SL: Have you manage to get to see Black Widow on the big screen?

OT: Yeah, Marvel hooked up a movie theatre for me, some of my friends and family to come and watch Black Widow. It was a surreal experience as I hadn’t been out of the house. I had been working but not doing anything like that, so to have all the sound going and everything… it was an amazing experience.
SL: Were you a Marvel fan before starring in Black Widow?
OT: I love Marvel. There are so many movies and so many of them have hit my ‘top movies of all time’ list. I was recently talking to a friend about Black Panther and how meaningful that was to me. Before I watched Black Panther I hadn’t realised what it’s like to see your own culture mythologised. There is a resonance to see someone who looks like your sister or aunt be given superpowers.
It was realising there was a hole I didn’t know was there, seeing that others were getting all this stuff. And it was Marvel that did that. Hopefully this is a trend across the industry that we can take and enjoy the culture of other people.
SL: Did Marvel give you the comics to scrub up on who Mason is and his relationship with Natasha?
OT: You would have thought that, wouldn’t you? That some man in a suit and glasses would come with it all but, no! I was just left to my own devices which is the worst thing you can do with someone like me [laughs]. I was mainly given the script and told to come back when I had something good.
SL: What was it like to work with director Cate Shortland on her first big-budget movie?
OT: Cate is the sweetest person you will ever meet. She is so lovely and kind. Which is weird as being a director you need to be a megalomaniac and control everything. What she does is that she is really great at character dynamics and nuance and she brings that to Black Widow which is impressive.
If you don’t get these auteur directors in then you run the risk of becoming cookie cutter, creating an okay thing that just about satisfies you. But Marvel taking a risk and giving these original directors the keys to the castle is great.
Like Thor: Ragnarok. Who would have thought we would get a movie like that?

SL: Will we see Mason again in the MCU?

OT: I always get confused about what I am allowed to say and what I am not, but basically: have me back Marvel, please have me back! [laughs] I imagine we might see him in more places.
SL: With Black Widow and The Handmaid's Tale, you have worked on some fantastic properties with powerful themes of female empowerment and more - you must be proud of that?
OT: That’s the thing about art is that it can entertain you but also show you different perspectives. We are now at a time when we are getting more female leads which is amazing and to be a part of something that is changing conversation is fantastic.
My main passion right now is that behind the camera representation is really poor. This is especially true with above-the-line producers, exec producers, writers, directors. People get tired of the diversity chat but if you look at the stats it’s unambiguous. There is a lack of representation and it is not because of a lack of talent. I am really excited to see the film industry change in that direction.
The good news about this whole diversity larks is that we get great stuff out of it. Like Hamilton, if we just let the same old guy write something like that then we would have never gotten Hamilton: The Musical, one of the best musicals of all time. So what’s in it for us all is amazing art and that’s what we are here for.
SL: If you had to give your top Top 5 Marvel movies - other than Black Widow - what would they be?

OT: Ooh...I’m not going to put them in order but: Black Panther, Logan, Deadpool, Iron Man and maybe Iron Man 2.

And if James [Mangold, Logan director who is now shooting Indiana Jones 4] is reading, I’m available and I can do lassos!
Black Widow is in cinemas now, on Disney+ with Premier Access July 9. Disney+ subscription and additional fee required for Premier Access.