Michael McIntyre: Showman is on Netflix now - we chatted to the comedian to find out more 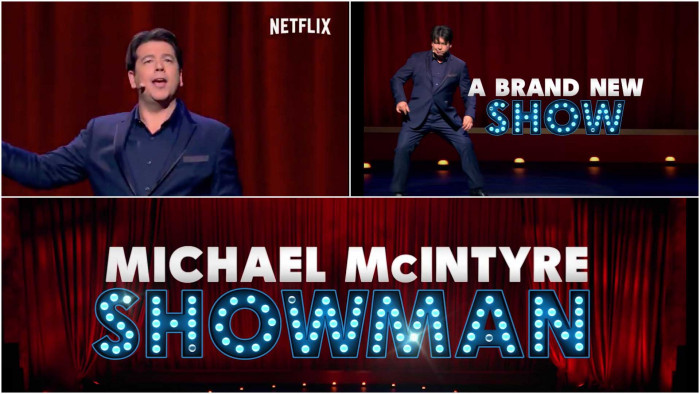 Netflix has bolstered its live stand-up series with one of the most successful comedians to come out of the UK in recent years: Michael McIntyre.

His brand new special, Showman, is now on Netflix and it comes off the back of his ‘Big World Tour,’ where he played to over 800,000 fans in sold-out arenas across the globe.

The hour-long show broaches such subjects as avoiding shark attacks in Australia, tech woes and the difference between performing for a US audience vs a British audience (spoiler: us Brits are a little more stiff upper lip in the way we show our appreciation of a joke).

So, does being on Netflix and not having to adhere to the BBC’s watershed mean it’s a much ruder stand-up show?

“I always thought they should announce the watershed with a big fat F word,” says McIntyre. “It’s fucking nine! But they never did and that was a trick missed.

“I never try and pander and always just be myself. It’s always been that way with live jokes.”

ShortList caught up with Michael McIntyre recently to chat about the show and life in general. Here are five things we learned about the superstar comedian...

1. Watching someone perform as a hologram was a surreal moment

"I’ve seen someone perform as a hologram," says McIntyre after we ask him if he would consider it, given the current lockdown of live venues.

"It was a corporate gig for a very nice, very wealthy family in the north and he said that he was stage shy so he made a hologram of himself making his opening speech.

"I sat with himself in the booth and he watched himself give this speech to 200 people, some of whom were quite elderly and thought it was the real him - and he completely died on his arse. He didn’t get a single laugh and I’m standing next to this guy and it was one of the most surreal experiences of my life.

"And then he exploded at the end into a thousand pieces, as holograms can do that, and there were elderly women screaming ‘what’s happened to him?’"

2. He has kept busy during lockdown

"We are all being challenged creatively right now. I am writing a bit, there might be a podcast, I am doing a game show, I will do as many things I can do with the hope that one day I can get back on stage. I’ve got lots of ideas for stuff, but it’s about doing things in the right ways. But I am not sure holograms are necessarily the way to go."

"I wasn’t into the driving gigs things. That started and people were being asked to hoot if they found something funny. You can’t be dealing with that. When you do live comedy and you see people getting up to pee and you are worried as you think they are leaving you. You think this person hates me. But actually watching somebody drive away, doing a three-point turn, would be horrendous."

4. Some jokes have taken on a new meaning during lockdown

"It’s challenging times but thankfully I recorded this special on March 6th, less than two weeks before lockdown so it was my last ever gig, and hopefully it won’t be the last one I ever do. I was lucky that we managed to sneak this one in.

"When I did the joke [in the latest show] about wrongly wearing massage pants as a mask in Asia, though, I didn’t realise that would become so relevant now. Wearing a mask while having a massage would be normal now and I’ve been worrying for months whether that joke is still funny.

"This is what happens when you record something and don’t put it out for ages. Even down to Kim Jong-un, I mean is he still alive? I am worrying about him for totally selfish reasons as I have a joke about him and need him to survive until September." [Editor's note: as far as we know, he has].

5. He regrets doing a fart joke about his wife

"I regret the previous DVD where I did and joked about my wife farting when she sleeps. That wasn’t strictly true," he says when asked if his wife agrees to him doing jokes about her.

"But I do run my jokes past her and she’s usually fine. I do think it upsets her when strangers speak to her and go ‘are you the one that farts in the night?’ or ‘are you the one that can't pull their tights up?’ I don’t think she likes that but ultimately I need laughs to pay the bills so she is okay with it.

"The reversing in the car thing, about her finding that sexy [a joke made in his show] is a strange thing but she does that - it makes no sense to me at all.

"Most of the jokes I am the butt of them, so I think she’s fine with it and the fact people are laughing means that it’s reality and people relate to it and don’t get upset on her behalf."