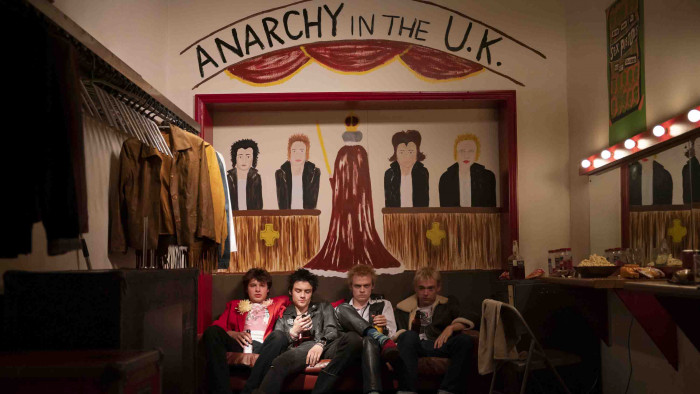 It was in 2012 when Danny Boyle first captured the mood of the nation with his beautifully uplifting Olympics Opening Ceremony. Fast forward 10 years and he's done it again, but this time the mood is of the UK right now is ferocious anger.

Pistol is Boyle's first foray into TV. It's a six-episode limited series about the founding of the Sex Pistols and their short-lived but historic time as a band.

Based on Sex Pistols’ founding member and guitarist, Steve Jones' memoir Lonely Boy: Tales from a Sex Pistol, the show is a cut-and-paste masterclass, mixing archive footage with actors portraying the roles of the Sex Pistols and the contingent that surrounded them.

Game of Thrones' Maisie Williams stars as punk icon Jordan AKA Pamela Rooke, who sadly passed away earlier this year.

They both sat down with ShortList to discuss the new show and what is was like retelling one of the most raucous times in the history of music..

ShortList: What was it about the Pistol series that made you want to star in it?

Maisie Williams: Initially I was very excited at the prospect of working with Danny Boyle. And then, I learned a lot more about the Pistols and their story which is about the ferocious working class, a story of what working class boys who want to make something of their life do and I think that's typically the genre that I find myself being quite drawn to.

I knew working on the show would be a dream but then learning more about the women who were so integral to the telling of the story which I didn't have a huge understanding of prior to this. It was clear that they wanted this time to be told more accurately. And so as a woman coming into a story like this, you never know if your role is going to be really meaningful. But it was. It's really special because that is the way that history was, but we have a tendency to write it a little bit more skewed.

ShortList: Malcolm McLaren is one of the most recognisable people from the punk period - what was it like playing someone who is so well known, with a voice and look that is iconic?

Thomas Brodie-Sangster: It was really fun and a great challenge, but something I accepted gladly. it was also something where I felt like I wouldn't normally get this job. I don't know. It just seems a bit... but it didn't feel like it was out of my comfort zone at all. I immediately just wanted to find out who this Malcolm McLaren character really was and felt that I connected with him instantly.

He's got so much nuance to his voice. To the way he holds himself. He's got power and presence but he's also such a visionary. He lives in the in this ideal constantly. He's thinking of the future. He's a builder, creator.

ShortList: There’s a lovely tribute to Pamela Rooke at the end of the second episode - what was it like having her around consulting on the show. Did it change how you prepared for the role?

Maisie Williams: Absolutely. I mean, we were so lucky to have her and to have her retelling all of these stories that we've read a lot about but to have someone who was there from the very beginning.

Her role in the story was just separated enough that she's managed to observe absolutely every one of these characters and people and formulated an idea and an understanding without it being linked to such pain.

In lots of ways it's very intimidating to spend time with her. But it shortly became the greatest asset that I could possibly ask for. There was pressure when you're playing someone real and pressure to do them justice. But, for me, I felt like there was really only one person who I wanted to enjoy my moments and be happy with my performance and that was Jordan.

Although she didn't get to watch the finished show, I know that she was very happy on the days when she came visit us on set.

ShortList: Danny Boyle seems to have brought a punk ethos to the series - did it feel like that on set?

Thomas Brodie-Sangster: I think that this show really shines because of our incredible supporting artists. The way that they brought all of our scenes to life.

The way that Danny [Boyle] gave so much context and information to the supporting artists, and then they in return gave just some of the most incredible performances. Pogoing, gobbing, dancing, screaming... yet they have the smiles on their faces once you said cut and they were ready to go again and do it again. They just brought so much energy.

Original series Pistol will be available on Disney+ from 31st May.