Exclusive interview: Journey into the mind of Goldblum 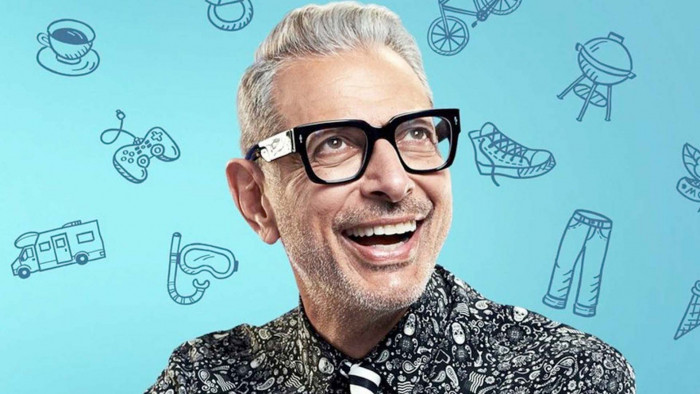 Not many people are endlessly watchable. We should know, given the amount of telly binged over the past few weeks.

But Jeff Goldblum definitely is.

Whether he’s saving Isla Nubar as Dr. Ian Malcolm in Jurassic Park, transforming into a disgusting fly man in The Fly, or simply giving interviews as himself and chatting about his jazz band when he’s supposed to be discussing acting in the MCU, we just can’t get enough of his unrelenting curiosity.

The World According To Jeff Goldblum, his new documentary series, exclusive to Disney’s new streaming service Disney+, sees the Jurassic Park icon travel the world investigating pop culture topics we thought there was nothing more left to know about.

“I do feel curious. I feel gifted with a natural curiosity, and it hasn't waned. In fact, it seems to be increasing. I've never had children before, and now I have two youngs boys, I think that's that's one of the things that keeps me curious - seeing the world through their eyes,” Goldblum told Shortlist,

“I can't wait to take them to see things that I've seen and sometimes neglected.” Some of those things are the subjects of episodes in The World According to Jeff Goldblum.

“We take a subject that people love and that are somewhat familiar with - jeans and sneakers, denim and barbecues, RVs and gaming, cosmetics and jewellery - things that are sometimes taken for granted, that we can maybe enlighten and provoke about,” he explained.

We spoke to the legend, who is also an executive producer on the show, about what he’d learned on his travels - and he taught us a whole lot, too. An at-home binge-watch that *also* makes us feel productive. Consider us sold…

1.Swimming pools are being used by NASA in ways you could never imagine

“There were so many surprises. There’s an episode about swimming pools, where we went to Houston, Texas, where NASA has a place called the Neutral Buoyancy Lab, where they have one of the biggest swimming pools in the world. It's so big that at the bottom of it is a replica of the International Space Station.

"Astronauts go down into the pool for six hours at a time to train and practice weightlessness. That was fascinating.

"I talked to some astronauts who had been up at the ISS for five or six months at a time, and one of them told me that when they come back after that period of time, none of the women but many of the men have something wrong with their eye. But only their right eye, never the left eye. It’s a mystery and we don't know why that happens. But, they think by investigating aggressively they're gonna find out many collateral, interesting things.”

2. Tattoos will change the human race

“I must say some of these episodes are particularly provocative. For instance, the tattoos episode: I met people who were doing things with technology that allowed the hacking of the human system, and for knowing ourselves better than we know ourselves.

"These tattoos tell you when you’ve had too much to drink or had too much sun. It reminds me of books I've read recently by Yuval Harari, his books ‘Sapiens’, ‘Homo Deus’ and ‘21 Lessons For The 21st Century’. He talks about one of the big challenges for the future being the intersection of AI and biotech, and how our whole species makes changes, and how all of this hacking of us may be a landmark challenge.

“I also got to meet the people who had tattoos of me, and I was able to even do a few marks on somebody's leg and add to a tattoo of me they had. That was unexpected, I never thought I'd be doing that.”

3. BBQ crickets are going to be your new favourite food

“For the episode on barbecues, I ate barbecued crickets, and we talked about alternative nutrition and protein sources that might be good for the whole planet and good for our bodies.

"I was thrilled to see this company called Aspire in Austin, Texas, which farms crickets to be eaten. Then I went to a barbecue expert and he grilled some of them up for me on the barbecue and I ate them, and that surprised me because I liked them very much.”

“In the denim episode, we talked about how the long proliferation in recent decades of making denim and coloring them with this indigo dye has ruined many of the waterways in the world, and how we're trying to clean those up and change the technology around that.

"I never knew before about the harm that the dyeing from jeans was doing to water systems around the globe, and the inspirational ways that some of the companies are trying to fix and solve that.

Detroit is being changed forever with bicycles

“There was a bicycle episode that I was very moved by. I took part in this Slow Roll group bicycle ride in Detroit and discovered how as a much more environmentally-clean vehicle, these bicycles are turning around a city like Detroit and bringing people together on a human scale, changing it for the better. Not only is it good for the environment, but it could bring us all together in an unexpected way.

"Each episode is kind of its own little art-piece documentary. I like them all for different reasons, and some of them I find very moving. The bicycle episode is also one of my favourites because my children find themselves on screen for a moment of time, and I just get a kick out of that.”

‘The World According To Jeff Goldblum’ is available to watch on Disney+ now.