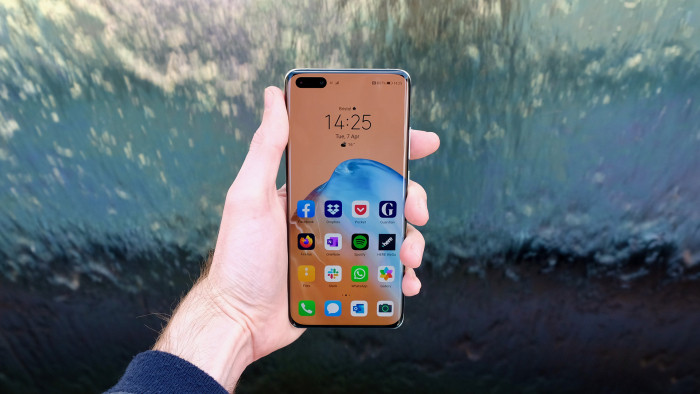 Huawei announced its latest flagship phone, the Huawei P40 Pro, in the midst of a global lockdown. But, believe it or not, that’s not the biggest obstacle to its success.

Costing a not insignificant £899, the P40 Pro is primed to take on the Samsung Galaxy S20 and the iPhone 11 Pro. To that end, it’s stacked with features and high-end components, all wrapped up in a deeply desirable shell.

But there’s a gaping software issue that threatens to torpedo the P40 Pro before it can really build up a head of steam. Here are six things you should know about the Huawei P40 Pro before you buy one.

The Huawei P40 Pro is a serious looker

If choosing your next smartphone came down to a simple beauty competition, the Huawei P40 Pro would be a shoo-in for the top spot. Or at least in a serious scrap with the Samsung Galaxy S20.

The front of the phone is just lovely, with a flowing curved-edge display and minimal bezels, framed by a shiny aluminium body that curves up protectively at the corners. If anything, though, the P40 Pro gets even better looking when you flip it over.

Yes, we’ve seen that large, rounded-rectangle camera module somewhere before (see the aforementioned Galaxy S20). But the Silver Frost finish of our model is something special - like some pearlescent, shimmering alien metal.

Its screen is bright and balanced

We wouldn’t say the Huawei P40 Pro has the best display on the market - Samsung and Apple would surely have something to say about that - but it’s difficult to pick fault with. You’re looking at a large, vibrant 6.58-inch OLED with a 2640 x 1200 resolution.

Everything looks nice and sharp, and Huawei provides the ability to tweak the warmth and colour tone to your liking. By default it’s perhaps a little oversaturated, but that’s easy enough to rein in.

Those two curved edges do tend to creates distracting distortions, particularly when watching videos or playing games, but you’ll get used to it. It might take longer to accept the large selfie cam island that intrudes on one corner of the picture, though.

The P40 Pro battery is good for two days

The Huawei P40 Pro has a chunky 4,200mAh battery that, together with an efficient display and Huawei’s battery-preserving software, will last you through a whole day of usage with plenty to spare. In fact, on less intensive days, you’ll get through two full days before you need to recharge.

Even if you do find yourself needing to supply a little extra juice in the middle of the day, the Huawei P40 Pro’s 40W charger will see you right. We plugged it in at 40% and found that just 15 minutes of charging brought it up to 75%. It also supports fast 27W wireless charging, while you can even lay another device on the P40 Pro’s back and have it charged up.

It has an all-round phenomenal camera

This time last year we would have told you that the Huawei P30 Pro was the best camera phone on the market. It probably shouldn’t surprise you to learn the Huawei P40 Pro is now a major contender for the 2020 crown.

It’s not just that the P40 Pro quickly and reliably takes really good, clean, balanced snaps. It’s that it does so in almost every situation you can imagine: wide-angle landscape shots, intimate portrait shots, night shots, selfie shots, and even zoomed-in shots. Very close-up shots don’t always capture the entire subject, with bags of bokeh away from the focal point, but they still look great.

The combination of four sensors is key here. You get a physically huge 50MP main sensor, a 12MP telephoto, a 40MP ultrawide, and a dedicated ToF 3D (time-of-flight) sensor. While it has the smallest number of megapixels (bar the ToF depth camera), that 12MP telephoto is the interesting one here. Its ‘Periscope’ configuration essentially stacks several lenses together for a genuine 5x optical zoom.

As a result, when you zoom in up to that 5x point, the results look genuinely good. It’s not simply cropping in like most camera phones. Even when you extend that to 10x, Huawei’s Hybrid Zoom system yields perfectly usable results.

Was it Huawei's big claims of 50x zoom shots that lured into considering the P40 Pro? Those claims are somewhat disingenuous.

Sure, you can whack things up to that level, but framing the shot is really difficult because it’s impossible to keep your hands sufficiently still. And at this point the phone effectively blows up a smaller image, leading to loads of noise and low detail.

However, stick with the Wide–1X–5X–10X presets the UI provides and you’ll rarely miss a good shot opportunity. Here are those presets in action, with a quartet of shots all taken from the same spot:

Even Huawei’s strong AI assistant isn’t really needed here, such is the quality of the default camera set-up and Huawei’s base camera software. In fact, this automated scene selector can make shots look a little unnatural and oversaturated, so you might prefer to leave it off.

Video quality is excellent, with the ability to utilise the variable zoom levels - though switching between them mid-shot isn’t as fluid a process as we would have liked. There’s no 8K support either, seen in the Samsung Galaxy S20 Ultra, but that’s a pretty niche feature right now.

With a Kirin 990 CPU and 8GB of RAM running the show, the Huawei P40 Pro won’t be found wanting for performance. It’s perhaps not as speedy as the Snapdragon 865 of the OPPO Find X2 Pro or the Exynos 990 of the Samsung Galaxy S20, but we’re basically talking about numbers on benchmark tests here.

Just like those two rivals, the Huawei P40 Pro has ample headroom for tomorrow’s intensive task. Indeed, the Huawei P40 Pro comes primed and ready for 5G network connectivity out of the box. If your network supports it in your area, then you’ll be able hoover up data at broadband-topping speeds.

You won’t have to watch those file sizes either (data plan permitting), as the P40 Pro packs 256GB of storage. It’s possible to double that up, but you’ll need to buy one of Huawei’s own custom Nano Memory cards for the job.

There’s a Google-shaped elephant in the room

So far, so nigh-on-flawless for the Huawei P40 Pro. But despite all this praise, we still wouldn’t recommend you rush out and buy one.

Huawei has a major issue with the US government, which has resulted in it having another major issue with Google. Put simply, the P40 Pro can’t run anything from the big G other than the bare underpinnings of Android 10 (which it runs its own ugly EMUI software on top of).

Without access to these ‘Google Play Services’ you get no Gmail, no Google Maps, no Chrome, no Google Drive, and no Google Music. You also get no Google Play Store, which means that you don’t have access to the millions of apps that every other Android phone user takes for granted. Huawei’s own AppGallery comes preinstalled, but the app selection is severely limited.

There are ways around this in the form of third party app stores, but none are perfect. And even if you do get all the non-Google apps you need, a portion of these rely on Google Play Services behind the scenes, making them either sub-optimal (like The Guardian app) or non-operational (like Netflix).

We love the Huawei P40 Pro’s alluring design, its vibrant screen, and particularly its outstanding camera. If we had to take a single phone out to document a special event, and look good while we were doing it, it might just be this one.

But we simply can’t recommend the Huawei P40 Pro to most people at this point in time. Its lack of Google support will have major repercussions for your regular app usage, and the phone simply asks for too much legwork and adaptability from the average user. However, if you have the tech chops to cope with the issues, you can buy a Huawei P40 Pro today for £899.