Three phones, big differences - here’s everything to know before you buy. 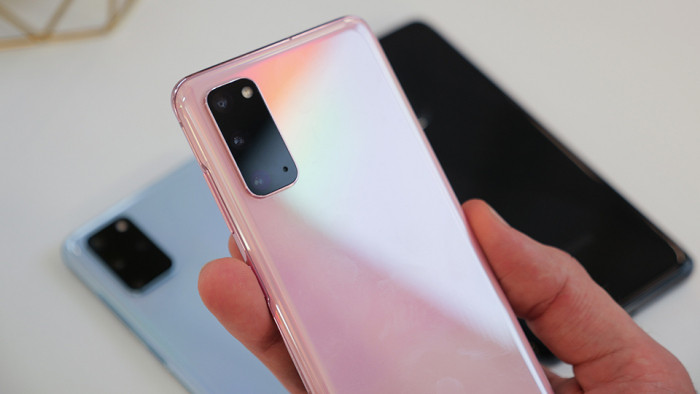 All three handsets share certain similarities but also have wildly different specs - with the big onus on 5G, super-zooming and 8K (ie, shaming you if you have only just made the leap into 4K).

ShortList was lucky enough to spend time with all three handsets recently, finding out just what Samsung has been doing to make sure that, if you are on the lookout for a new phone, you choose its devices and not go lusting after one of those pesky iPhones.

1. These phones are all 5G ready

That’s right, Samsung has properly embraced 5G this time around, making sure that all three handsets that comprise the new Galaxy S20 range are 5G compatible.

It told ShortList that 18% of all of its sales are set to come from 5G phones, so it’s expecting a decent response here. Given how light the phones are (the S20 weighs just 163g), that’s an impressive feat technically - bearing in mind that when the S10 5G came out, it was considerably thicker than its 4G version. For those who aren’t quite ready for the 5G push, it has also made a 4G version of the S20, in the UK at least.

But if you opt for 5G, then you’ll be able to play Forza Street for the first time on a mobile and play against people playing on a PC, which is a nice touch. Samsung also reckons 5G will mean better video streaming. It’s improved its video streaming by offering a wide-angle option - not for what you are thinking, but so your whole family can chat on the couch and other such examples.

2. The screen sizes leave room for the Galaxy Note 10

When it comes to the Samsung Galaxy S20 Ultra, that has a massive 6.9-inch screen which beats even the Samsung Galaxy Note 10 Plus (that’s a mere 6.8 inches). All of the screens are Quad HD+ Infinity, which is AMOLED pretty much at the top of its game.

That should mean that the phones are great gaming (where frame rates are key), while animations and transitions between apps will also be smoother. It also stops all those moaning about Samsung phones not having a 90Hz or 120Hz screen - but, for many, this sort of stuff is pretty hard to notice with the naked eye.

Couple it with HDR10+, though, and things get very exciting. If you like watching movies on your phones (we won’t tell Chris Nolan), then the higher Hz rate and HDR-compatibility means that pictures will ping with better brightness and contrast. It’s also a big number and phone manufacturers bloody love showing off with big numbers.

The Samsung S20 is a decent-looking phone in its own right but much like what Apple has been doing with its iPhone range, you have to look to the Plus and Ultra varieties if you want more cameras.

That’s not to say that the S20 isn’t packing a decent lens setup. On board is an Ultra Wider12MP, a Wide Angle 12MP and a 64MP Telephoto - the last two both come with Optical Image Stabilisation. Flip it over and there is a 10MP selfie cam.

The S20+ goes one better with four cameras on the rear - three of which are the same as the S20 but there is also a DepthVision camera. What the hell is this, we hear you whisper? Well, it’s needed for portrait photography (gives you that fancy background blur) and also needed if you are using a phone for AR fun times.

The S20 Ultra also comes with four cameras but its wide-angle lens is a whopping 108MPs?! As you can see from the pictures, this does mean that it has a hefty camera bump compared to the other two handsets. The selfie cam has been upped to 48MP, while the telephoto lens has a lower megapixel count (48MP, compared to 64) and its F-stop range is increased to f3.5 which means less light will get in.

But, still, 108MP! Gulp. All of this brings us on to something called Space Zoom…

Space Zoom is not what you think. It isn’t a zoom function that’s trying to rival the night shooting capabilities of the Google Pixel 4, iPhone 11 or the P30 Pro. It is a super-zoom function, though, and it’s impressive.

Again, this feature varies depending on the handset you go for. For the Samsung Galaxy S20 and S20+, there’s a 3x hybrid optics zoom and a Super Resolution Zoom (that’s where the space part comes in) of 30x.

The S20 Ultra completely smashes this, however, offering a 10x hybrid optics zoom and a Super Resolution Zoom of 100x - thanks to some nifty lens tech that sees a lens mounted sideways and prism tech (not prison tech) used for zooming.

We tried out the zoom on all phones and the feature is pretty mind blowing. The OIS in the lens really does help to keep the picture away from camera shake and there’s a fantastic pop up visual that appears to help you navigate precisely the area you are zooming. This does get a little trickier when the zoom goes all the way to 100 but it still works really well.

When taking shots with such a big zoom, the images take on a painterly effect which makes us think that zooming that far is more of a gimmick, rather than something people will do regularly. It’s worth noting that the smoothness between each zoom mode is fantastic. There is a lovely zooming animation now between 5x, 10x etc that makes using the zoom one of the most pleasurable ever on a phone.

The camera tech has been improved once again with the Samsung Galaxy S20 range. All of the phones have something called Single Take mode. This is a mashup of video and stills photography, capturing a whole host of images and then giving you a selection of the best ones.

Pro mode has a super-steady feature, which means you can pretty much use your phone as an action cam and get decent, non juddery shots. There is also Night Hyperlapse, which offers a decent amount of contrast and clarity when shooting video. Other features include: AI best moment, ultra wide shot, live focus, AI filter and smart crop.

All of this photography and video gubbins mean that you can shoot in native 8K. Why? Well, this is all about future proofing apparently as you can scale down to 4K and Full HD from the shots. But if you shoot 8K natively, then your footage would be instantly compatible with one of Samsung’s shiny new 8K TVs - now there’s an up-sell.

There is a lot to like about all of the phones Samsung has released. Given we are all used to bigger phones now, however, we do think that, if price is no option, you would be a touch disappointed with the S20, given there’s better camera hardware on the S20+, in a chassis that isn’t that much bigger.

The S20 Ultra is a wholly different beast. Chunkier than the rest, with a screen that really is huge, we weren’t taken in by the whacking-great camera array on the back but this is a blisteringly powerful phone and our lust for thin phones has basically meant phone battery is crap. Not with the S20 Ultra - there's a 5000mAh battery on board which will definitely see you through the day. The S20 and S20+ have 4,000 and 4,5000mAh batteries respectively.