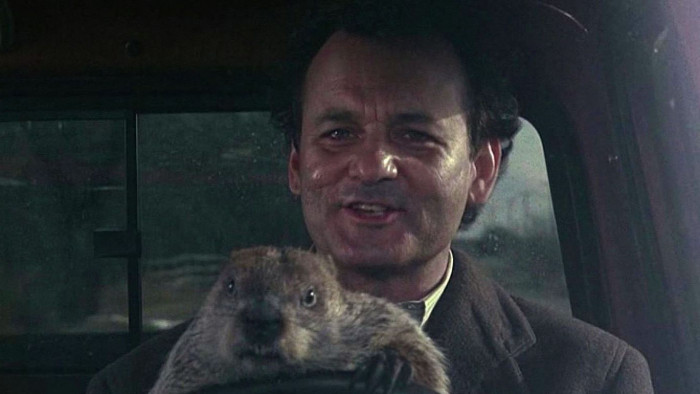 Here’s what you probably know about Groundhog Day...

It’s a seminal early nineties comedy. It stars Bill Murray as grouchy Pittsburgh weatherman Phil Connors, reluctantly sent to cover a yearly groundhog tradition in the small town of Punxsutawney, where he finds himself doomed to repeat the same day over and over (and over) again. Wacky hilarity ensues, a dabble of romance, more hilarity, and like Scrooged the Sequel, we discover that his character is so cantankerous that the only way he's able to see how poorly he treats others is when he's entrenched in a supernatural state. It’s uplifting, melancholic, clever and brilliant.

Well here comes something you probably didn’t know – and it could just alter your take on this classic film forever.

To begin with, it's important to assess the events that transpire towards the end of Phil’s first day: Unable to get back to Pittsburgh when a massive blizzard even the city’s sharpest weatherman couldn’t foresee brings traffic to a snowy standstill, Phil, chattering and dressed in little more than a shirt, stands on a highway remonstrating with a state official who informs him it’s a no-go.

Later, back in town, we see Phil drowning his sorrows at the bar, joined briefly by his co-workers who, naturally, he dismisses. Afterwards, he finishes his pitiful night off with an excruciatingly cold shower – we know he’s in discomfort from the close-up of him scrambling for the taps and another shot from outside the curtain showing him fumbling madly inside. The camera then cuts to him wandering down the corridor in chilly distress.

Cut to the next scene. Black tiles whirl from 5.59am to 6.00am, Sonny and Cher's I Got You Babe blares out the alarm's tinny speakers and we're left to assume it’s a direct repeat of the previous day, with our man clueless that he's stuck in limbo.

Well, at any rate, he’s dying, never to return to mortality and scold another colleague again.

We didn't see him get into bed; we didn't see him setting that iconic alarm, just wandering the corridors of that quaint bed and breakfast, grumbling erratically about his cold shower. More erratically than usual? That’s because our man slipped backwards after his panicked jump out the tub, cracked his head and got a concussion. A concussion which, coupled with the booze in his system and a possible bout of hypothermia brought about thanks to his highway stunt and that icy shower, eventually kills him.

They say that when someone dies the brain keeps going and cells continue to activate while the rest of the body does not. Well this is exactly that, as Phil’s own mind condenses what feels like a thousand years of activity in little more than a few seconds. Why else do you think he spends a near eternity meeting and greeting the same odd little characters encountered in the past 24hrs? And so there he lies, skull bashed in, possibly on the floor of his room, his brain replaying all the previous day's events.

From our point of view, Phil’s time spent in limbo is 80-85 minutes running time, give or take. From his own, it’s 10,000 years (that being the amount of time director Harold Ramis said he believed the character was trapped in the ceaseless time loop for) - but what if this whole time Ramis knew that this was all in Phil’s mind, that a mishmash of electronic signals rushing through his cortex would all but feel like thousands of years of emotions, but pass in the blink of an eye?

But wait, it gets darker still...

One of the most memorable scenes in the film, you may recall, involves Phil bumping into an old acquaintance on his walk into town on that first Groundhog Day morning.

Played by character actor Stephen Tobolowsky, this excitable stranger wastes no time in trying to convince Phil that the pair know each other from their younger days, even going so far as to pull out the sibling card, claiming he once dated Phil’s sister, Mary Pat. Still visibly unsure who this babbling man is, Phil - in his own dry manner - feigns recognition in a bid to get rid of him.

Hurriedly pacing alongside his old pal, Ned, who it turns out is in the life insurance game, goes straight into the sell, beating on Phil’s chest with fraught endeavour and laying it on thicker than a groundhog hide:

“You know, I got friends who live or die by the actuarial tables and I say 'hey, it’s one big crapshoot anyway'. Tell me, have you ever heard of Single Premium Life, because I think that really could be the ticket for you.”

“Single Premium Life”? Figured it out yet?

At this point you may be thinking that Ned’s actually a con-man, fully aware this TV personality would be making his seventh trip for Groundhog Day and that by doing his homework to fake a backstory about long ago kinship he might be able to scam poor Phil out of his savings – only it’s worse than that. Ned Ryerson is The Devil.

Those eyes, the gazed, crazed expression; it’s so obvious something was off about this loner. Tobolowsky wasn’t just playing an oddball, he was playing Satan himself; the Prince of Darkness; the Fallen One, attempting to collect Phil’s soul before his brain fully shuts off and he transcends into the afterlife.

Think about it – from the freak unpredicted snow storm to the cold shower to the van not starting, everything seemed to go wrong following the first meeting with ‘Ned’ - even the groundhog predicting six more weeks of winter, the rotter. Phil’s fateful mistake was rushing away from the life insurance salesman and right into that large puddle, eliciting Ned’s famous response: “Watch out for that first step, it’s a doooozy.”

And what about that very line itself? "Watch out for that first step?” Cackling away from the safety of the pavement, was Ned impishly forewarning another wet tumble Phil would have when jumping out of the tub in his shivering state that evening?

Note that nobody else notices this back and forth. Ned isn’t even on the radar for passers by because he simply doesn’t exist, visible only to Phil. Besides, does it not strike you as odd that Phil wouldn’t recognise him, a man he seemingly spent such a close proximity during his youth? Sure, he’s highly sardonic and doesn't suffer fools gladly, but he’s also as sharp as a tack, and yet he’s at a loss, not a flicker of acknowledgement in his mind.

Caught up in this Punxsutawney purgatory, it's not long before our man eventually tries to end it all by topping himself (electrification in the bath with a toaster, driving a car off a cliff with a groundhog for company - further proof this wasn't the groundhog's doing) but all to no avail, because, again, it’s all in his head.

'But what about that happy ending', you’re probably wondering, when in one exhausting day he does it all – stopping a man from choking on his food with the Heimlich manoeuvre, a boy getting injured from falling from a tree, fixing a tyre for a couple of nice old ladies, buying Wrestlemania tickets for a young pair of newlyweds (one half played by Michael Shannon, fact fans), playing the piano at the big dance, and of course - winning the heart of his longstanding love interest and producer, Rita (Andie MacDowell).

What may have slipped your mind about this final evening among all the feel-good plot points, is the other person Phil has done a good deed for. As he and Rita look to escape festivities for some alone time, the pair bump into an old friend of Phil's - yep, good old Ned Ryerson, passing by a side entrance and only too keen to tell Rita what Phil bought from him earlier that day.

It turns out he bought the entire caboodle - “whole life term, uniflex, fire, theft, auto, dental” – and wait for it – “with the optional death and dismemberment plan”. He signed on the dotted line. Phil didn’t need Hell to freeze over, it already was.

And if you’re wondering why Rita is able to see Ned (noticeably on his lonesome again) - she's a figment of Phil's imagination at this point, so it wouldn’t matter.

So, now Phil’s signed his soul away to this bespectacled cross between Freddy Krueger and the Grim Reaper, he finally gets his ‘tomorrow’. Of sorts. Why do you think you don’t see another person in sight as the pair walk out into a snow-white Capra-like setting, just a car in the distance? As his brain reaches its shut-off point and the cells lessen and memory finishes, Ned has trapped him in another loop, one in which life is simpler with fewer people, less interaction, more snow. Eventually, it will just be Phil on his own, unconsciously living in a false reality.

So there you have it: you’re Neo and we’re Morpheus, pills in-hand, pulling the plug on this sham world so you can sit up and see it for yourself. We’re not expecting you to go with everything laid out here, but at the very least hoping you open your mind to the possibility that there was something far darker to this modern fable.

After all, the greatest trick the devil ever pulled was convincing the world Ned Ryerson was a secondary character.