Everything you need to know about the new Samsung products

Can it cure our hangover yet? 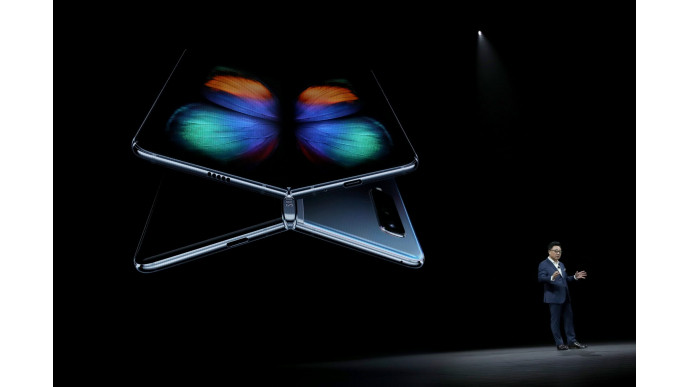 Hark, tech geeks! Samsung have announced all the details of their new products at the Galaxy Unpacked event this week, so we’ve whittled everything down to what you really need to know. Prep your wallet, you’re gonna want a few of these;

There’s a foldable phone that doubles as a tablet

Aptly named the Galaxy Fold, this device functions as a phone or a larger tablet when folded out. It’s also got six, SIX! Cameras. You could probably film your own sequel to The Matrix (nobody is counting the last two films as sequels) on it. It also holds 512GB of storage, and features a side-fingerprint scanner. Plus, you don’t have to do anything if you’re watching something between phone and tablet mode, Android’s continuity technology does all this for you.

This bit of kit will set you back a tidy £1,800 though, so unless you really need six cameras, probably best just to stick to your existing phone and use your existing tablet to watch Peep Show on train journeys. Also, it has no headphone jack, which is super annoying. You get a pair of earbuds with it, but let’s face it, it’s minutes before you lose one of them. It arrives in Europe on 3rd May, so you’ve got time to save up.

The newest set of wireless earphones are smaller than last year’s Gear IconX buds and come with two speakers in each bud, to improve sound quality and are 30% smaller than the IconXs. Here’s the great bit, on one charge they can last for six hours of music and five hours talking time, plus the earbud case itself charges them and can sustain two full charges. They’re £130 though, so you’d expect something for your money.

Three new S10s will be available in March

The most boring of all the announcements, unless you love minor details, is that three new Galaxy S10s will be available as early as March 8th. The Galaxy S10e is more compact and has been produced in line with customer demand for smaller devices. This can only be a good thing, we can barely type with one hand any more and phones are slowly morphing into tablets. There’s also an ‘Ultimate Performance Edition’ S10 with 1TB of storage, think how many nudes and pictures of dogs you could store on there! The UTE does cost £1,399 though, so there’s your holiday gone for this year.

The wearables have some incredible features

Samsung had three new products to show off. Firstly, the Watch Active. Costing £229 and coming out on 20th March, this rival to the Apple watch and Fitbit focuses on fitness and wellbeing and has slightly upgraded from last year’s Galaxy Watch to now feature a blood pressure monitor. It also features an accelerometer, gyroscope, barometer, heart rate monitor, and ambient light sensor. If you pre-order, you’ll also receive a wireless battery charging pack.

The Galaxy Fit is purely a fitness tracker, coming in at £89 and featuring all the standard fitness tracker features including a heart rate monitor, step counter, and it can recognise when you’re doing six exercises that are programmed into it. It’s also waterproof in up to 50m, and it’s battery can last for a week. Available 21st May.

The Fit e, yes, a strange name, is essentially the Galaxy Fit but smaller and lighter. At £35, you still get the same features as the Fit, but with a much shorter battery life, and possibly not as detailed tracking of your vital stats. There is no release date for this one yet.

Apple’s latest handset is packed to the brim with features you will actually use.