Edgar Wright on Last Night In Soho, horror and the problems with nostalgia

An in-depth interview with the Last Night In Soho director. 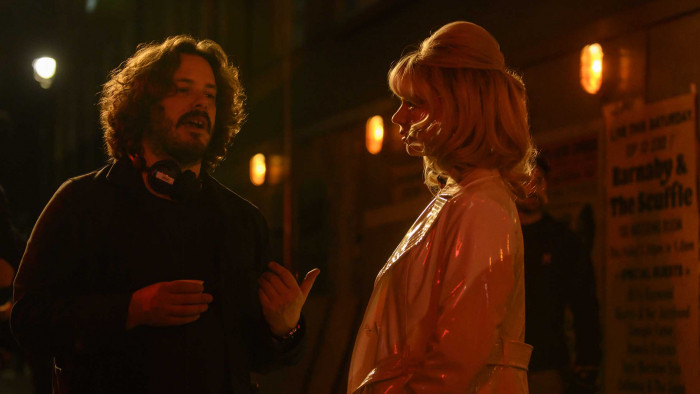 Last Night In Soho is the latest film from director/co-writer Edgar Wright and it's a frightening, ferocious look at the dangers of nostalgia and what happens when someone conjures up a past beset with its own demons.

It's a movie filmed in the heart of Soho, a rare treat for those who live in London, as it actually gets what it's like to live in the city - especially if you are an outsider looking in.

Last Night In Soho stars Thomasin McKenzie as Eloise, a budding fashion student who comes to London from Cornwall. She has a 'gift' that lets her enter the 1960s, where she shadows aspiring singer Sandie (Anya Taylor-Joy) and, well, we don't want to spoil anymore.

We sat down with Wright and chatted about the making of the movie, how his collaboration with co-writer Krysty Wilson-Cairns came about and why London's Soho means so much to him.

ShortList: What was it like filming in Soho, a place that's so close to your heart?

Edgar Wright: When we first talked about actually doing the movie, the first question was, 'can we shoot in Soho itself?' If the producers and the location people had said to me we can't actually do it in Soho, I probably wouldn't have done the film.

Aside from the story itself, one of the many inspirations for using Soho is that in the 27 years I've lived in London I spent more time in Soho than any other area. Just work wise, everything that I've made, even the American films like Baby Driver and Scott Pilgrim, I've edited them there so I've spent a huge part of my life living, working and socialising there.

Soho is just an area of London that you don't really see on screen that much. Michael Winterbottom did a great film like 20 years ago, Wonderland, but most period films set in Soho tend to shoot somewhere else - either in East London, or sometimes in Liverpool or Manchester doubling for London. So I just thought I really want to see central London, the central London that I know of, the one I see every day, on the screen.

SL: What was it like, after Baby Driver, writing with someone else again?

EW: Yeah, Baby Driver is the only script that I wrote on my own. Because all the previous scripts have been written with Simon [Pegg] or Joe Cornish, Michael Bacall... with Krysty [Wilson-Cairns] it was something that came up organically.

Originally I thought maybe I would write this one on my own, but when I was editing Baby Driver, Sam Mendes introduced me to Krysty. It wasn’t in a professional sense he just said, ‘you two would get along great’. And weirdly the first time we met was in Dean Street in Soho. Over drinks Krysty pointed to the Sunset Strip strip club on Dean Street and said ‘I lived above Sunset Strip for five years, when I was working at the Toucan [pub] as a barmaid', when she was an aspiring screenwriter.

As soon as she said that, I told her I have this idea for a film. We decided to meet up another night - it was actually the night of the Brexit vote. So there were two people who voted to remain in Europe, drowning their sorrows, going on a pub crawl around Soho, which took in the Toucan and also ended up at Trisha's [New Evaristo Club], the after-hours bar.

I told Krysty the whole plot of Last Night Of Soho, as a kind of sounding board, initially. Then a lot later when I'd finished all the press for Baby Driver in early 2018 I called her and asked her to write the Soho script with me. And she said 'yes'.

It was just something where it felt, on a number of levels, the perfect kind of collaboration. Also, to take something that I had had in my head for a long time as a story, but to bring a new perspective to it was amazing. We wrote the first draft in six weeks, I think.

SL: You aren’t from London initially but came to work and live in London - it feels like there are similarities to you and the character Eloise.

EW: Absolutely, I mean, I came from Dorset originally then I moved to Somerset and then I came to London. Your first experiences in London, where you don't know anybody, you haven't got any money, you have no connections, it's a really kind of forbidding, dispiriting place. It takes a year or two to try and find some kind of inroads.

It's funny, sometimes I think people just assume that everything in my movies is a reference to a film, but in truth the Eloise character is like: I came from Somerset to London, my mom studied dressmaking at art college, my sister-in-law came from Cornwall to London and studied fashion as art college, so she's very close to Eloise. Krysty as well, she came from Glasgow to London. Her mom and grandmother both have dressmaking experience.

I'd say that my mum is sort of the model for Eloise in terms of... I'm sure she would mind me saying this but my mum is supernaturally switched on. When I was growing up she was somebody that would feel a presence in old buildings or sometimes saw ghosts of people that have lived in older buildings and older places.

That's something that I grew up with, with my mum. She watched the film for the first time the other day, and it just sparked off all those stories again. And she talks about them in a very matter-of-fact way.

I was never sceptical of what my mum had seen. If anything I was kind of envious that I hadn't seen things myself, as a young horror fan. If she had seen the ghost of a previous owner of a house and I hadn't, I would be a bit disappointed.

SL: Last Night In Soho is packed with literal old haunts that aren't there anymore, notions of a romanticism about a time that never really existed. Why do you think people reminisce about ‘the good old days’ when the reality is usually something quite different?

EW: I always loved the idea that bars are called 'haunts', by the way. But this [romanticism] is something that inspired the movie. I had to think about it myself, because I would spend a lot of time romanticising about a decade that I never lived in and having these fantasies about going back to the ‘60s.

Obviously lots of people have thought ‘wow, it would have been great to be back to the ‘60s and see this gig, or the opening weekend of a film, or hanging out at these clubs'. But then if you think about it a lot, which I did, you start to think, ‘am I thinking about this because I'm failing to deal with the present day’.

What Last Night In Soho is saying is that, no matter what you do, you cannot change past events, even if you had a gift like Eloise to travel back in time in your dreams. She still cannot avert disaster, and she cannot change future events. She's not Marty McFly.

Separately from nostalgia, if you obsess about mistakes and think, ‘Oh if only I could go back and change that’ you have to say ‘stop’, you can't do that, all you can do is deal with the present and do better moving forward.

EW: Quite rightly you have said that you don't want to call Last Night In Soho a horror....

SL: Ah... well, we were going to ask: ‘do you think we get a bit too caught up with genres when it comes to the movies we watch?’

EW: There are some things… I mean I don't love the term 'elevated horror', which people seem to be using a lot recently because elevated horror means, like, ‘oh you think you're above The Shining. You think you're above The Exorcist or Don’t Look Now? They are happy to be in the horror section, so what makes you so special?’ That's a snobby term for me, but I guess with Last Night In Soho, it’s a slow burn.

It doesn't start like a horror film and then it turns into something more like a psychological thriller and then, by design, it goes into full-on operatic, expressionistic, full-colour horror by the end. That's kind of the idea. But I'm not scared of the 'H' word and I definitely don’t need the prefix of ‘elevated’ in front of it.