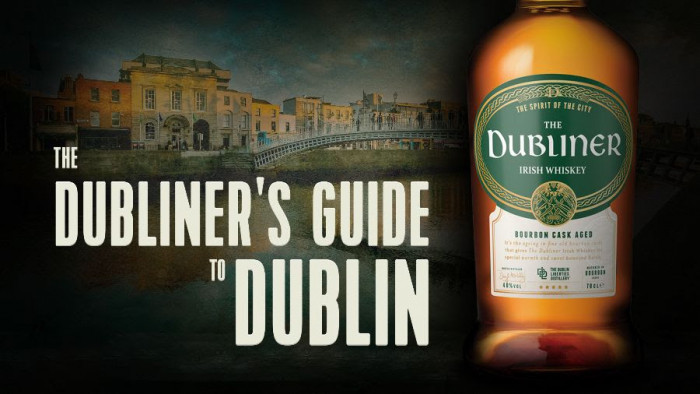 Sponsored by The Dubliner Irish Whiskey

Dublin is one of the best cities in the world, with the vibrant capital bursting with culture, craic and even better whiskey. As any true Dubliner will tell you, however, the city’s magic really comes to life when you venture off the beaten tourist path and discover the real gems of Dublin.

To celebrate the launch of The Dubliner Irish Whiskey in the UK, Dublin’s namesake whiskey that is now available to purchase in Sainsbury’s stores nationwide, we spoke to some of our favourite Dubliners to bring you The Dubliner’s Guide to Dublin - the ultimate list of insider tips from those in the know - as well as a competition giving you the chance to win a trip to Dublin with three friends!
Good times, good whiskey and good craic guaranteed!

Best Guinness in town: The Royal Oak, Kilmainham is the hidden gem of Dublin’s pub scene. Tucked away behind the Irish Museum of Modern Art, it’s not a pub that you’d just stumble across, which is probably why it’s rarely mentioned in the usual guides – but don’t let that fool you! The Royal Oak oozes old-school charm and a drink here is like taking a trip down memory lane - decor, wood veneer and chipped tables included.

Secret spot: The Bar with no name, located on Fade Street, is a hotspot with those in-the-know. An anonymous indoor-outdoor hangout serving up some of the best cocktails and weekend brunch in the city. It goes by a number of names with locals, including No Name Bar, Secret Bar, 3 Fade Street, and Snail Bar – due to the fact you can locate it by finding the large wooden snail outside the bar’s hidden entrance. Accessed via rickety stairs, inside you’ll find a tented terrace and three flamboyant sitting rooms with DJs spinning the tunes on Thursday, Friday and Saturday nights.
Foodie treat: Variety Jones, is a small, humble restaurant located on Thomas Street, owned by chef Keelan Higgs and his brother Aaron. For anyone looking for a great meal, this is my go-to recommendation and is not one to be missed! The food is fantastic and has an emphasis on seasonal ingredients, all cooked over a big open fire that is a central part of the restaurant. The menu changes regularly, but whatever is on offer that week – you’re sure to be in for a treat.

A place to rest your head: There are a number of hotels to suit everyone’s budget in Dublin City, I would recommend staying around the Dublin 2 area as it’s the ideal location for getting around. The Iveagh Gardens Hotel is a real treat, it is also situated on Harcourt Street - the hub of Dublin nightlife.
Where to eat: Well that depends what kind of food mood you’re in! Get yourself down to the Merchant's Arch in Temple Bar for the best breakfast in the city, it even overlooks the iconic Ha’penny Bridge. Bad Bobs Temple Bar serves the best chicken wings in town with a side of live music 7 nights a week. If you’re looking for traditional Irish cuisine, then The Brazen Head - the oldest pub in Ireland - is up there with the best. If you really want to spoil yourself, check out the ‘a la carte’ menu and elegant settings at the Bank on College Green, or else for a quick bite you can’t beat a toastie and an Irish Coffee in Fallon’s Pub - just a 5 minute walk from the Dublin Liberties Distillery, you can even pop over and see us for a whiskey tasting afterwards to top it all off!
Where to sup good whiskey: Over 70% of the world’s whiskey was once Irish Whiskey and Dublin was at the heart of this growth. There wasn’t a working distillery in Dublin City for over 125 years and now there are four within walking distance from each other. The Dublin Liberties Distillery has one of the largest selections of whiskies, including the Dubliner Irish Whiskey range. Other must-visit bars for whiskey fans are The Palace Bar, Bowes Pub and The Noresman – all of which have some of the best whiskey selections in the city.
Sights worth seeing: John Kavanagh’s bar, The Gravediggers, is one of my favourite pubs in Dublin. This seventh-generation family run bar is filled with history, shares a wall with Glasnevin Cemetery & Museum and serves the best Coddle* in Ireland - but don’t tell my mother I said that!
*Coddle is a traditional Dublin dish made with potatoes, bacon and sausages
Find Lisa over on Instagram: @ldwhiskshe

Top insider tip: It has to be Rascal's HQ taproom and pizza restaurant, and not just because I work there! Located in Inchicore, it’s the only pizza restaurant and craft brewery in Dublin. Fresh beer brewed on site, acclaimed 5-star review pizzas, events, exhibitions, DJs and a whole lot more. We’ve even partnered with The Dubliner Irish Whiskey for a special Beer Cask series, which sees our beer brewed in The Dubliner’s whiskey casks.

Where to stroll: South William Street and Drury Street – two parallel streets in the south inner city. Considered quite cool and hip, these two streets are well worth a stroll. Not too busy with traffic, lovely sights, sounds and smells.
Best coffee in the city: Without a doubt Nick’s Coffee in Ranelagh. While Ranelagh is a suburb in Dublin, it’s only a very short Luas ride (Dublin’s tram system) from the south city centre. There are plenty of places to eat and drink there, but Nick’s is a wonderfully idiosyncratic coffee ‘hut’ on the ‘main street’. The coffee is exceptional, and the staff are equally welcoming.
Sights worth seeing: The Royal Hospital & Irish Museum of Modern Art, Kilmainham, which stands on the site of the 7th century Early Christian settlement of Cill Maighneann, from which the area of Kilmainham derives its name. The Royal Hospital was built between 1680 and 1684 and was a retirement home for old soldiers, rather than a hospital. For 243 years thousands of army pensioners would live out their final days within its walls. The building underwent extensive restoration in the 1980s and is now home to the Irish Museum of Modern Art. It’s a bit of a hidden gem and an oasis of calm. Beautiful building, beautiful gardens.
Where to sup: Fallon’s “The Capstan Bar” located in The Coombe, at the bottom of Frances Street. A wonderfully charismatic small pub with the perfect pint of Guinness. You’ll scarcely find a more authentic pub in this up-and-coming, soon-to-be-gentrified part of Dublin. Very close to the city centre too, but you’ll feel far from the madding crowd.
A hidden gem: R.A.G.E. – The Record and Game Emporium located on Fade Street, without a doubt the best record shop in Dublin. They also sell all manner of games, new and retro. It’s just a great spot to go and browse. The staff are all very friendly and something good is always playing on the record player.
Find Joe over on Instagram: @rascalsbrewing

Secret spot: With no signs and low-key socials, Luncheonette is an art project meets canteen, hidden in the basement of the National College of Art & Design on Thomas Street. Its opening hours track the colleges (closed on weekends and during the summer) and with a short menu that changes daily, they have mastered the art of doing a few simple things really well. A hidden lunch gem if ever there was one.
Best pizza in town: Has to be Gaillot et Grey. The sort of pizza joint every neighbourhood should have, this pizzeria was set up in an old betting shop. One room with a big oven, sharing and individual tables, and a small back terrace for when the sun comes out. It's owned & operated by a French/Irish couple who use Emmental cheese on the pizza instead of standard mozzarella. They also do a killer chicken sambo for lunch with freshly baked bread straight from the oven.
Best local lunch spot: Assassination Custard is a tiny, 8-seater (at most) restaurant that opens Monday-Friday for lunch. Operated by a couple named Ken & Gwen, they lean heavily on fresh vegetables and take an Italian approach to the food and hospitality. The flavours they create in this tiny kitchen in between doing school runs have to be tasted to be believed. Get there early and be ready to share one of the two tables.
Where to ‘zone out’: Phoenix Park - it's 'Europe's biggest enclosed public park', or something like that. I love that in the space of 20 minutes you can go from being in the bustle of downtown Dublin to being stuck in a herd of deer roaming the park and feel like you are in the middle of the countryside.
Find John over on Instagram: @luckysdublin

To celebrate the launch of The Dubliner Irish Whiskey in Sainsbury’s stores nationwide, we’re giving you the chance to win a weekend in Dublin you and three friends, including a tour and tasting of the home of The Dubliner Irish Whiskey – The Dublin Liberties Distillery. For your chance to win, simply visit win.dublinerwhiskey.com and complete the entry form. May the luck of the Irish be on your side!
T&Cs apply. Entries close on 15th December 2019.