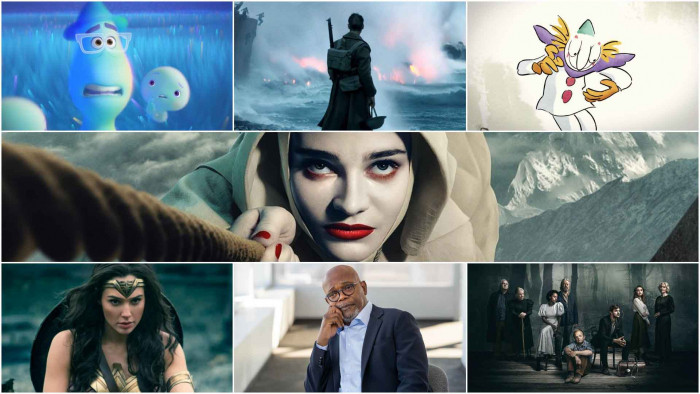 2020 has been something of a git this year, which means many of us will have WAY more time to watch the telly box this Christmas. To make sure that you have a little bit of solace this Christmas period, we have thumbed through all the famous Christmas guides, previewed a whole host of stuff, to bring you the very best shows and movies that are on over this festive season.

Just a word of warning, if you are not in the UK - this guide, unfortunately, isn’t for you. Keeping up with the British spirit that has seen our borders locked because of Covid and Brexit cut us off from the rest of the wonderful world, we’ve kept this guide UK-only. You can, however, head to our myriad Netflix, Prime Video and Disney Plus guides to find something you like.

Wonder Woman 1984 isn’t heading to homes until 13 January so you have a little time to wait for that one. The first, though, is on ITV this Boxing Day and is a brilliant Superhero jaunt set in the midst of World War 1. Gal Gadot is wonderful as Diana Prince and the rest of the supporting cast look like they are having a blast.

That Chris Nolan just can’t stop tinkering with time, can he? Here he showcases the battle of Dunkirk, with British and other Allied troops battling to win the war. We see it from three different perspectives (and time differences) and it’s arresting stuff.

One of the most wholesome movies ever made, with one of Hugh Grant’s best performances. Director James Bobin is the go-to for brilliant kids’ movies (he also made the first Paddington, The Muppets reboot and the ace Dora The Explorer movie) and the story is just one of pure marmalade-slathered joy.

The Goes Wrong Show is a brilliant idea - taken from the stage, the cast put on plays that, well, go wrong. This one sees the Cornley Dramatic Society try out a nativity, with the Three Wise Men sans trousers, and will be well worth the watch.

Motherland is one of the best things on TV so we’re very happy it’s been given a Christmas Special. Here Julia, Kevin, Liz and Meg are pretty much forced to go to a Christmas party at Amanda’s. The dress code is Tinsel and Tiaras and the clientele are, well, awful,.

6 The Magical World of Julia Donaldson

If you have kids (and even if you don’t) the world of Julia Donaldson is a very familiar one, with the likes of The Gruffalo, Zog and Room on the Broom come from her amazing imagination. This is a profile of the writer and the author is as full of wonder as her creations.

Last year, Worzel Gummidge was one of the best specials on TV and it’s back with Worzel’s friend Nancy tagging along. Shirley Henderson is Nancy this time around, a role made famous by the late Barbara Windser, and the plot revolves around a ship’s head coming to life. Mackenzie Crook is ace as Worzel, too.

8 Roald And Beatrix: The Tale of the Curious Mouse

Based on a small, strange fact that Roald Dahl visited Beatrix Potter when he was six years old, Sky has created a whole comedy drama out of the thing, starring Dawn French and a whole slew of famous famous - including Jessica Hynes, Rob Brydon, Alison Steadman and Bill Bailey.

Celebrating 30 years of the political news quiz, this special edition of Have I Got News For You looks back at 30 years of the show, which has had both Paul Merton and Ian Hislop as team captains from the start.

Nope, not an animation about Joe Pesci’s outburst in Goodfellas but a brilliant adaptation of Blake’s book of the same name. The premise is: “the adventures of a little toy clown, who has been thrown away with a group of fellow toys by an owner who has outgrown them”. With visuals that match Blake’s unique drawing style, this is one for the whole family.

This is a Christmas Day treat, courtesy of Disney Plus. It's the latest animated movie from Disney Pixar and follows a middle school music teacher who finally gets his chance to become a jazz musician, only for an accident to happen that separates his soul with his body. This one will be available to stream on Christmas Day.

Not the Hootenanny. Never the Hootenanny. Well, given this year we are all stuck inside with nary a firework, we reckon a few of you, rather begrudgingly, will be tuning into Jools’ annual knees-up. If you do, then you will see the likes of Celeste, Sir Tom Jones, Michael Kiwanuka and Roisin Murphy

There’s nothing like watching a play over Christmas and this is one of the best. Starring Toby Jones, Richard Armitage, Aimee Lou Wood and others and shot on the stage at the Harold Pinter Theatre in London, this rendition of Anton Chekhov’s classic is the same that hit the stage earlier in the year (which now feels like a lifetime ago).

14 The Big Fat Quiz of the Year

The Big Fat Quiz of the Year isn’t quite as impressive now the line-up has changed but it is still a good laugh, with many a team not caring at all about winning but just coming up with ridiculous answers to the questions. This time around teams include: David Mitchell, Richard Ayoade, Maya Jama, James Acaster, Joe Lycett, and Stacey Solomon. Strange that they didn’t include any female comedians, though.

This is a new BBC adaptation of the classic novel, about a group of nuns surviving in a remote nunnery, which was fantastically brought to life by Powell and Pressburger in the ‘50s. This new version has Gemma Arterton, Jim Broadbent and Rosie Cavaliero. Directed by Charlotte Bruus Christensen who has been a cinematographer on many movies, it looks sumptuous.

16 Billy Connolly, It’s Been a Pleasure

This documentary celebrates the life and career of Billy Connolly, one of the great comedians of our time. It charts his career and features new footage of the man himself, plus a plethora of talking heads including: Sir Paul McCartney, Sir Elton John, Sir Lenny Henry, Dustin Hoffman and Russell Brand.

17 Doctor Who: Revolution of the Daleks

The Daleks are back in the latest Doctor Who, which is going out on New Year’s Day. It’s set to be an emotional one as we know changes are afoot with the Doctor’s companions. The Daleks have been given a new look, too, and Captain Jack is back, so we have high hopes for this one.

If you need a dose of serial killer dramatics, then The Serpent is for you. Based on the true events of a couple who, according to the Beeb, are “travelling Thailand, Nepal and India in the 70s, carrying out a spree of crimes on the Asian ‘Hippie Trail’ and becoming the chief suspects in a series of murders of young Western travellers”. This one stars Jenna Coleman and Tahar Rahim and is a co-production between the BBC and Netflix.

This year’s Taskmaster was the best yet. Even though it shifted to Channel 4, that’s not the reason (as it hasn’t really changed) but the calibre of guests was just fantastic. There’s a new batch of celebs for the New Year special, including John Hannah, Krishnan Guru-Murthy, Nicola Coughlan, Rylan Clark-Neal and Shirley Ballas.

We finally know when Death to 2020 is out and it’s 27 December! This will be a must watch, given the year we have had. It’s a mockumentary about all the crap that has happened in 2020 and has been written by Charlie Brooker and some of the Black Mirror team. Not much is known but if anyone can tell the story of what the hell just happened, it’ll be Brooker.