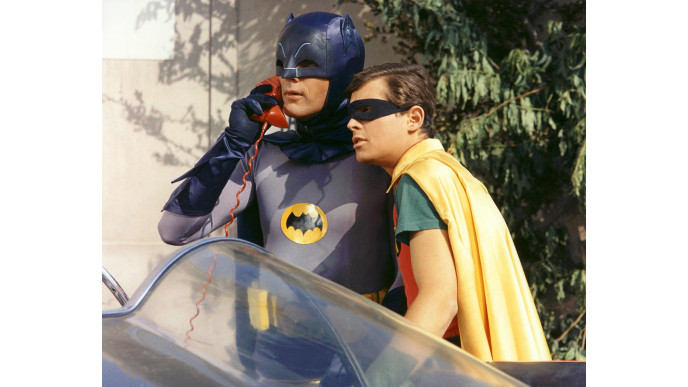 The 1966 Batman series is a high point in television, a gloriously self-aware piece of multicoloured, campy silliness, a cartoon made 3D, complete with an admirably laissez-faire attitude towards leotarded beer-bellies and a bizarre commitment to the phrase “youthful ward”.

It had, and continues to have, its detractors, and is arguably one of the factors in comics continuing to not be taken as seriously as a medium as they should be. Every six months, a newspaper will publish a piece with a title like “Biff! Pow! Whoosh! How Comics Are Growing Up”, using sound effects from a TV show broadcast fifty years ago to poorly make a point about comics being published now.

But it’s a glorious show, one that children can enjoy completely at face value and adults can appreciate the ridiculous tongue-in-cheek nature of. It presents a world where machines have enormous labels on the side of them detailing their purposes, where nobody ever murders anyone if they can put them in a big stupid f*cking trap then go off and run an errand assuming everything will pan out instead, where a baddie with a name like Egghead can turn up, speak entirely in egg puns, have henchmen named after different ways of serving eggs, and everyone is totally blase about it, like “Yeah, let’s stop him, let’s stop Egghead” instead of “Whoa, hang on, he’s… he’s egg-themed? He’s an egg-themed villain? That doesn’t make any sense.”

It’s awesome. People cite The Dark Knight as this masterpiece, and it’s good, but isn’t there something to be said for entertainment that doesn’t involve pencils being shoved through anyone’s eye? The Joker in The Dark Knight has scars and fading, knackered makeup. The Joker in the TV series wears facepaint over his giant, prominent moustache, which is no less bonkers. (Actor Cesar Romero had made his name playing a succession of mustachioed heartthrobs and refused to shave for the role.)

The Batmobile from the TV series is also the best Batmobile Batman ever had, even if all the footage of it had to be sped up to look good.

A two-minute clip posted on Twitter this week shows another way in which the 1960s Batman ruled:

It understood that, unlike a lot of superheroes, Batman is the real person and Bruce Wayne the costume. He’s only himself when beating rotters up, but has to spend the brunt of his life dressed in the preppy clothes of a smarmy billionaire.

Christopher Nolan’s trilogy got this to an extent, that the rich playboy is the in-plain-sight disguise, the ultimate alibi. Bruce Wayne couldn’t possibly be Batman, people in the Nolanverse think. Bruce Wayne is a twat. But, Bale puts on a big silly voice when he wears the cowl, while West only modifies his voice when appearing unmasked as Bruce Wayne.

Imagine Christian Bale playing this scene - while Adam West speaks in his normal voice as Batman and adds a smooth buttery layer to his Bruce Wayne, Bale does an I-am-the-Devil thing when he’s dressed as Batman which would look incredibly stupid coming out of a normal person. Adam West effortlessly slips between his real self - Batman - and the buttery tones he has adopted when playing a wealthy fop.

It’s a slightly silly scene, sure, but it’s not only an impressive performance from West, it showcases a fundamental element of the greatest fictional character of all time that so often goes overlooked.

Also, there’s a seal in it. Did you see the seal? There’s a f*cking seal in the police commissioner’s office. Best show ever.