Andy Serkis on Alfred’s ‘complex’ relationship with The Batman

We speak to the legendary actor about his take on Alfred. 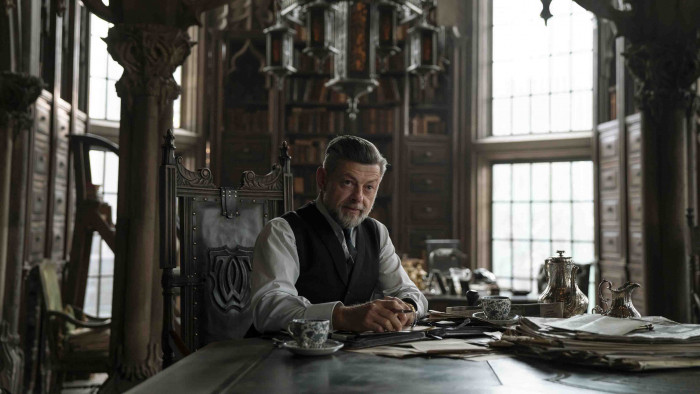 Andy Serkis is no stranger to superhero movies. The actor/director/mocap magician has 'battling The Avengers' on his CV, thanks to his role as Ulysses Klaue in Age of Ultron and Black Panther, and he recently directed Venom 2: Let There Be Carnage.

In The Batman he plays Alfred Pennyworth - the legal guardian of Bruce Wayne. It marks the first time he's tackled a DC property but it's with a director he knows well, having worked with Matt Reeves on the two best films of the Apes franchise: Dawn Of The Planet Of The Apes and War For The Planet Of The Apes.

We caught up with Serkis recently, to talk about his take on Alfred, why he isn't a father figure in The Batman and what made him fall in love with all things Gotham...

ShortList: How did you prepare for the role of Alfred in the Batman?

Andy Serkis: I was very well prepared by the great director Matt Reeves. Who, during the course of post production on War For The Planet of the Apes, began to tell me his ideas for the Batman movie and particularly Alfred.

He told me what he wanted from the character and and the relationship between Alfred and Bruce, which was unlike other versions in that they're not sort of totally formed as this duo who are taking down the enemy.

Bruce is on this kind of crazy nihilistic journey - going through a form of self harming in a way, psychologically and physically. And Alfred is struggling to deal with that because he's a man of logic, a man of rules, a man of law.

Alfred is very proud of the dynasty that he's been part of despite the fact that he's failed and carries survivor guilt for not being there in Bruce’s hour of need. So it's a very complex sort of sifting, shifting sands of a relationship.

SL: It really does feel like the movie digs more into Alfred not being able to be a father figure for Bruce.

AS: It does. It’s like, no matter how much he tries it, he can't fill that void because he's not built like that. He doesn't have that sensibility. He's a soldier, primarily coming from soldiery into the secret services and then as a sort of close protection officer. It's a million miles away from having the ability to truly be a father figure.

He can impart skills and can teach him to a certain extent, but but actually the emotional nitty gritty of being there is lost in really,

SL: How different was it working on The Batman with director Matt Reeves compared to the Apes franchise?

AS: I mean, Matt is always concentrated on and focused on the emotional centre of a movie and the emotional heart of a movie. It’s the case with all the characters in The Batman and it was the case in the Apes movies. Thematically those were about family, family and revenge.

These two themes also play out in The Batman, but every character is very clearly drawn and magnifies the Gotham that’s been created. It’s a mythic Gotham but one that we can relate to.

SL: Were you a fan of the Batman comics when you were growing up?

AS: I was hugely into the TV show, as a kid I raced home from school to watch that for sure. I loved it - I totally bought into that world. In terms of comics, I was more of a Spider Man comic collector, but actually it was the TV show that spoke to me.

SL: On that, it's amazing how different the interpretations of The Batman can actually be.

AS: Yeah, absolutely. I mean, he's one of those great mythic characters that bears retelling in the same way that the great pieces of classic texts can be rebirthed, like any Shakespeare play or Ben Jonson. They are characters for our times, whatever times that we find ourselves in and they reflect obviously, hugely different things.

I mean, this version of Gotham is conceived around a post-truth world where you ask, ‘what is the belief system here?’ We're so sucked under by the corruption and greed and that's why it feels tangible, but it's sort of magnified on a more mythic level.

AS: No, I mean of course not. I'm a storyteller, and I'll sift out great stories wherever they come from whatever universes.

I feel incredibly fortunate to have had the opportunity to straddle all of these different environments and fantastic kinds of canvases and landscapes to be in.

I really do love this type of filmmaking - where you can be serious, where you can touch and connect millions of people across the world with a story and yet it still feels there's still a fairy tale aspect to it in the broadest sense. It allows us to discuss things in a way that perhaps would seem too polemic if it was from a smaller view. I love this kind of world for that reason.

SL: In your career, you have played both good and evil characters - have you got a favourite side?

AS: For me it’s what’s serving the story and finding an interesting portal into the psychology of that person, whether they are on the dark side or the light side. They're all good fun to play.

I know people tend to say, 'yeah, the villains are always great to play' and they are, there's no question, they are, because you're you're allowed to tread in an arena that is verboten. But Alfred, this character, was equally as challenging but in a different way. Especially when you've got someone like Matt at the helm, who's willing to really mine through those kinds of emotions.

The Batman is out in cinemas 4 March, courtesy of Warner Bros.

More The Batman Exclusive interviews below!