The best Star Wars quotes of all time

Know them all, you do not. 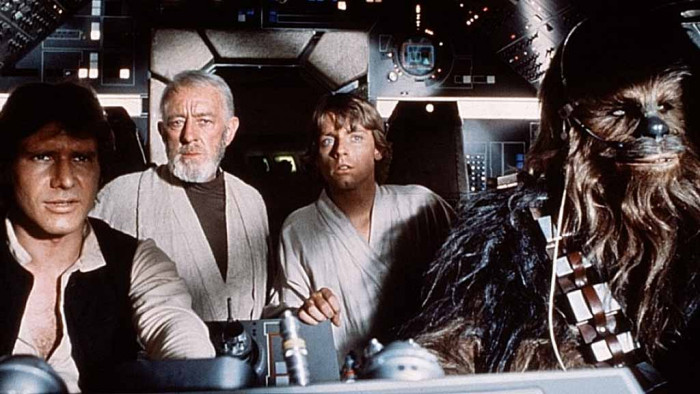 It’s the greatest movie franchise of all-time and, under its Disney overlords, looks like continuing for many years to come.

To celebrate this face, here are the best Star Wars quotes of all time - the movies, not the shows - from dialogue that Harrison Ford famously quipped to George Lucas: "You can type this shit, but you sure can't say it!"

So let’s take a second to appreciate 80 (although we haven't numbered them) powerful, prescient and poignant quotes from a long time ago, in a galaxy far, far away and the people who said 'em.

“Anakin, you’re breaking my heart! And you’re going down a path I cannot follow!” (Revenge Of The Sith)

“Let me give you some advice. Assume everyone will betray you, and you will never be disappointed.” (Solo)

“Don’t call me a mindless philosopher, you overweight glob of grease.” (A New Hope)

“Don’t get technical with me. What mission? What are you talking about? I’ve just about had enough of you. Go that way, you’ll be malfunctioning in a day you near-sighted scrap pile.” (A New Hope)

“He’s holding a thermal detonator!” (Return Of The Jedi)

“I’m rather embarrassed, General Solo, but it appears that you are to be the main course at a banquet in my honour.” (Return Of The Jedi)

“Sir, the possibility of successfully navigating an asteroid field is approximately 3,720 to 1.” (The Empire Strikes Back)

“Hello. I don’t believe we have been introduced. R2-D2? A pleasure to meet you. I am C-3PO, Human-Cyborg Relations.” (The Phantom Menace)

“Oh my. Space travel sound rather perilous. I can assure you they will never get me on one of those dreadful Star Ships.” (The Phantom Menace)

“Everything you heard about me is true.” (Solo)

“We’re gonna do this…” (The Force Awakens)

“I sense great fear in you, Skywalker. You have hate… you have anger… but you don’t use them.” (Attack Of The Clones)

“Master Kenobi, you disappoint me. Yoda holds you in such high esteem. Surely you can do better!” (Attack Of The Clones)

“I’ve never had the luxury of political opinions.” (Rogue One)

“Save the Rebellion. Save the dream.” (Rogue One)

“We have them tied on the end of a string.” (The Last Jedi)

“The strongest stars have hearts of kyber.” (Rogue One)

“I assume you need something. Desperately.” (The Force Awakens)

“Remember…the Force will be with you, always.” (A New Hope)

“You can’t win, Darth. Strike me down, and I will become more powerful than you could possibly imagine.” (A New Hope)

“Luke, I don’t want to lose you to the Emperor the way I lost Vader.” (The Empire Strikes Back)

“You were the chosen one! It was said that you would destroy the Sith, not join them.” (Revenge Of The Sith)

“Your concern is hardly warranted.” (Rogue One)

“I find that answer vague and unconvincing.” (Rogue One)

“You came in that thing? You’re braver than I thought.” (A New Hope)

“Aren’t you a little short for a stormtrooper?” (A New Hope)

“Why you stuck-up, half-witted, scruffy-looking nerf-herder!” (The Empire Strikes Back)

“Get your head out of your cockpit.” (The Last Jedi)

“Now, young Skywalker… you will die.” (Return Of The Jedi)

“The Dark Side of the Force is the pathway to many abilities some consider to be… Unnatural.” (Revenge Of The Sith)

“The Force is strong with you. A powerful Sith you will become. Henceforth, you shall be known as Darth… Vader.” (Revenge Of The Sith)

“Good Anakin. Good. Kill him. Kill him now.” (Revenge Of The Sith)

“The garbage’ll do.” (The Force Awakens)

“I know how to run without you holding my hand!” (The Force Awakens)

“You will remove these restraints and leave this cell with the door open.” (The Force Awakens)

“I need someone to show me my place in all this.” (The Last Jedi)

“If there’s a bright centre to the universe, you’re on the planet that it’s farthest from.” (A New Hope)

“This is not going to go the way you think.” (The Last Jedi)

“You’re just a child with a mask.” (The Last Jedi)

“My disappointment in your performance cannot be overstated.” (The Last Jedi)

“Great shot kid, that was one in a million.” (A New Hope)

“Lando’s not a system, he’s a man!” (The Empire Strikes Back)

“Laugh it up, fuzzball.” (The Empire Strikes Back)

“That’s not how the Force works!” (The Force Awakens)

“I’ve been running scams on the streets since I was ten. I was kicked out of the flight academy for having a mind of my own. I’m gonna be a pilot. The best in the galaxy.” (Solo)

“I’ve got a really good feeling about this.” (Solo)

“You don’t know how hard I found it, signing the order to terminate your life.” (A New Hope)

“I wish I could put my fist through this whole lousy, beautiful town.” (The Last Jedi)

“The force is strong with this one.” (A New Hope)

“I’ve been waiting for you, Obi-Wan. We meet again, at last. The circle is now complete. When I left you, I was but the learner; now I am the master.” (A New Hope)

“I find your lack of faith disturbing.” (A New Hope)

“Obi-Wan has taught you well.” (Return Of The Jedi)

“You may dispense with the pleasantries, Commander. I am here to put you back on schedule.” (Return Of The Jedi)

“Luke, you can destroy the Emperor. He has foreseen this. It is your destiny. Join me, and together we can rule the galaxy as father and son.” (The Empire Strikes Back)

“No. I am your Father.” (The Empire Strikes Back)

“General Grievous, you’re shorter than I expected.” (Revenge Of The Sith)

“Be careful not to choke on your aspirations.” (Rogue One)

“Fear is the path to the dark side.” (The Phantom Menace)

“Ahh, hard to see, the Dark Side is.” (The Phantom Menace)

“Mmm. Lost a planet, Master Obi-Wan has. How embarrassing.” (Attack Of The Clones)

“Death is a natural part of life. Rejoice for those around you who transform into the Force.” (Revenge of the Sith)

“The greatest teacher, failure is.” (The Last Jedi)