Great Indiana Jones And The Temple Of Doom facts revealed. 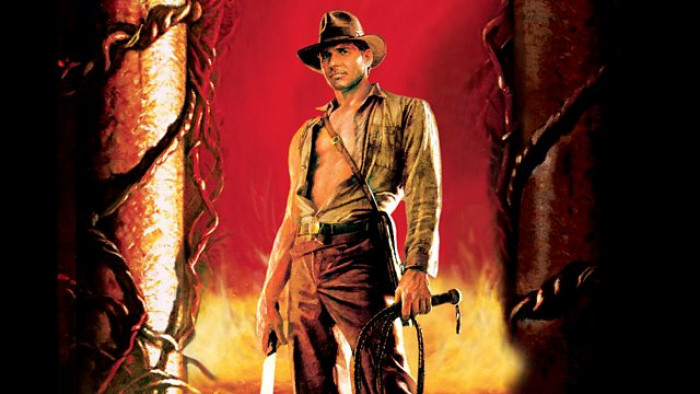 Last time you watched Indiana Jones And The Temple Of Doom, how closely were you paying attention? Did you get the reference to Star Wars? Did you see the guy from Ghostbusters? Do you know which main character was never supposed to be in the movie in the first place?

With news that we may be getting an Indiana Jones TV show, we thought it would be worth revisiting the second movie in the franchise and offer up a whole bundle of great Indiana Jones And The Temple Of Doom facts - 15 of them to be precise...

1. An easy one to miss, this. ...Temple Of Doom is actually set before Raiders Of The Lost Ark. It was also originally titled ...Temple Of Death, but that was deemed a bit too dark by the scriptwriters. Can you tell that George Lucas and Stephen Spielberg had both recently divorced their partners around this time?

2. The name of the club where Willie Scott (Kate Capshaw) performs Anything Goes is Club Obi Wan, a reference to Star Wars' Obi Wan Kenobi.

4. For a glorious 18 seconds Dan Aykroyd makes an appearance. You barely see the Ghostbusters actor's face, but it's definitely him waving Indy goodbye at the airport.

5. Along with Gremlins, …Temple Of Doom was criticised by parents who felt it was too scary for its PG rating. Almost as a direct result of the outcry (and mirroring Steven Spielberg's recommendation prior to the film's release) the MPA moved to create a new rating: PG-13. For another ten points, which film was the first to get a PG-13 rating in America? (Answer: The Patrick Swayze flick Red Dawn.)

6. You may already know that Indiana was the name of George Lucas’ dog, but did you know that Willie is named after Stephen Spielberg’s dog? And that Short Round is named after screenwriters Willard Hyuck and Gloria Hatz’s dog?

7. The opening sequence was supposed to feature Indy riding his motorcycle along the Great Wall of China. Sadly, the Chinese authorities weren’t into the idea and the script had to be rewritten.

8. Ah, the classic banquet scene. But what were the Chilled Monkey Brains actually made of? Turns out it was nothing more sinister than custard and raspberry sauce. Delicious. Two more, please!

9. For some reason, the film’s wardrobe department only provided one red dress for Kate Capshaw to wear as Willie Scott. Despite the crew’s best attempts to look after it, it was partially damaged by an elephant. Y'know, the usual wear and tear. Pity they didn't have a spare in the trunk, mind.

10. According to Movie Locations, the film's producers travelled to India and found all the locations, but local authorities wouldn’t give them access until the script was rewritten. Rather than make the changes, the shoot moved to Sri Lanka...

11. Harrison Ford slipped a disc during filming and had to return to the US for emergency surgery. However, Spielberg carried on filming using stuntman Vic Armstrong as a stand-in. The director shot the conveyor-belt fight scene, where Indy brawls with the slave master, using Armstrong. Incidentally, the slave master is played by Pat Roach, who was also the big Nazi mechanic torn apart by a propeller in Raiders Of The Lost Ark.

12. Ke Huy Quan, also known as Jonathan Ke Quan and recently seen in Everything Everywhere All At Once, wasn't supposed to be in the film at all. He only attended the audition because his older brother was going for the part of Short Round. However, he was so vociferous during the screen test, giving his brother instructions and so on, that the casting directors selected him instead.

13. The original plot - the same one that featured Indy riding his motorbike on the Great Wall - was actually set in China and included a secret valley chock-full of dinosaurs. (This is all according to the 1999 book Mythmaker: The Life And Work Of George Lucas by film biographer John Baxter.) The plot got binned, though Spielberg did end up doing something with dinosaurs, of course...

14. Kate Capshaw was actually covered in bugs during that infamous scene. There were over 2,000 of them, so anytime someone complains about what they have to do on I'm A Celebrity, just remember that she was the OG of bug-based entertainment.

15. A surprising amount of the film is actually based in fact. Well, sort of… The Sankara Stones that Dr. Jones is seeking were conceived by George Lucas. However, screenwriters Huyck and Katz tied them more closely to the sivalinga, stones which are sacred symbols of the Hindu God Shiva. Oh yeah, and as for that famously denounced raft/parachute scene? Well, frustratingly for the naysayers, it’s actually entirely possible - the sequence used in the film was nailed in one take.