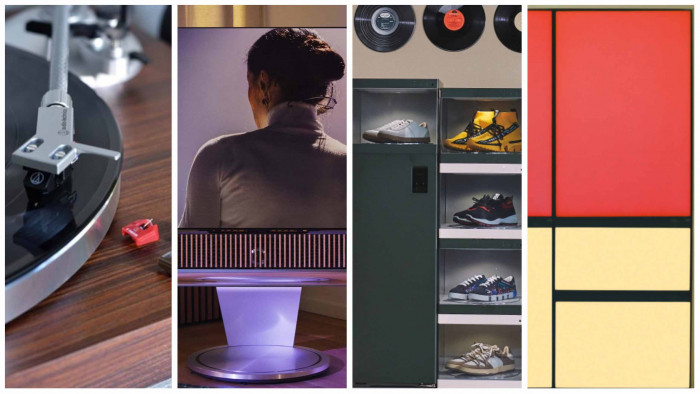 Every year (Covid permitting), the tech world descends on Berlin to showcase cool gadgets and gizmos that will come out in the next few months.

IFA is a tech wonderland, fuelled by currywurst and banging techno, and Shortlist were at the show salivating at the next big things that you will want to spend your hard earned on.

From gaming monitors to bendable TVs, fridges that change colour according to your mood to soundbars so high end even the Queen would raise one’s eyebrow at their audio precision, here we chart our 11 favourite bits of tech from the show…

1. B&O’s soundbar is the most beautiful we’ve seen (and heard)

The B&O Beosound Theatre is a stunning piece of tech. It’s a soundbar designed to slot under your current TV of choice, offering up both style and impressive audio nous. Billed as one of the most powerful soundbars around, within its designer aluminium frame there are some 12 speaker drivers and the audio has been primed to make sure that voices in TV and film are as crystal clear as possible. It’s modular, too, so you can switch the fascia, extend the wings on the side and have it wall mounted or as part of a stand. Out later this year, the B&O Beosound Theatre costs from from £5,590.

2. Get a kick out of LG’s incredible trainer care system

The LG Styler ShoeCase and ShoeCare system is the perfect thing for your trainer collection. The case has transparent panels to showcase your shoes, while protecting them from humidity and fabric-discoloring UV light. A 360-degree rotating table allows you to present your favourite pair in your room and the ShoeCare tech will refresh up to four pairs of shoes at a time, taking around 40 minutes.

3. Ring finally has the perfect device for flat owners

You can now have a Ring system in your flat, thanks to the Ring Intercom. It’s been built to sit alongside existing intercom systems but will allow Remote Unlock features, the ability to allow verified people into your house without keys and even let your Amazon driver into the building if you allow it, without you being in. It’s heading to the UK in October, from £150.

4. This OLED TV is one you can bend yourself

LG has revealed the world’s first bendable OLED TV, allowing you to bend it into place when you want to game and the like and straighten it out again when you just want to watch a movie on the thing. Called the LG OLED Flex, the TV comes with a remote with a dedicated button for bending the thing. If you are fickle, then you can manually change the degree of curvature in five percent increments over 20 different levels.

5. This all-screen bendable laptop is something special

One of the most eye catching things on show this year was the Lenovo ThinkPad X1 Fold. This laptop is unlike any other as it's pure screen on the inside which is foldable. It uses a 16.3-inch folding OLED display which means you can have it as a tablet or fold it up to use as a laptop. Not only is the tech cool, it look great and comes in a 25 percent thinner chassis, compared to previous models. This one is expected in November.

6. These Glasses will bring the cinema to your living room

Even if your living room is the size of a cupboard, you can now have a cinema style experience at home thanks to these rather snazzy smart glasses. The Lenovo Glasses T1 are billed as a virtual monitor for mobile devices. This essentially means you can stream whatever is on your phone on to a massive virtual screen that only you can see. These should be out by the end of the year.

It took Samsung a while to launch its first OLED gaming monitor but we are glad it took its time. The Odyssey OLED G8 looks incredible and is ultra-slim, with a thickness of just 3.9mm at its thinnest part. It has an ultra-wide QHD resolution of 3,440 x 1,440 and uses a 21:9 aspect ratio with 100% color volume. Impressive. Most impressive.

While noise-cancelling ear buds are everywhere right now we are really impressed with the new Jabra Elite 5. They offer Hybrid Active Noise Cancellation, which is a two layer ANC that is for more reliable noise cancellation across a wider range of frequencies. They look decent, too, have up to 28 hours battery life, link with voice assistants and at £149 are something of a bargain.

9. Audio-Technica’s latest turntable has us respecting the wood

The always ace Audio-Technica has taken the wrappers off of its AT-LPW50BTRW turntable. It's a fully manual, belt-driven record player that comes in a rather fetching wooden design. While this makes it look old school (in a good way), the tech inside is bang up to date with Bluetooth connectivity - so you can stream whatever you are spinning to speakers or headphones. The turntable is available now, for £419.99.

Fancy a fridge that can change colour and get you out of your ‘hangry’ mood? Well, the LG MoodUp fridge does just that. It has LED door panels that can be personalised, with some 22 colors for the upper door panel and 19 colors for the lower. You can also refresh the mood in your kitchen by applying color themes including Season, Place, Mood and Pop. It won’t order your milk for you but at least you will be happy when open the thing.

11. This new soundbar is a world's first

There were a few soundbars revealed at IFA, but this one by Sennheiser caught our eye. The Sennheiser Ambeo Soundbar Plus is a 'world's first' as it is the only soundbar around to offer 7.1.4 standalone sound.

It's a smaller version of the original Ambeo Soundbar - which is now called the Ambeo Soundbar Max - but far cheaper at almost half the price. It will be out late September, costing £1299.