100 amazing pieces of advice from movies 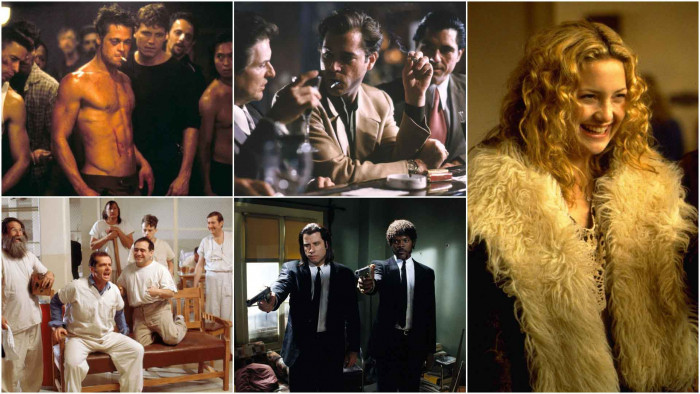 While it's normally standard practice to seek advice from parents, teachers, doctors, policemen and fortune tellers, people just don't give enough credit to the fountain of knowledge that is the cinema.

Instructing us on how to see ourselves and the world around us, screenwriters have been acting as unappreciated and extremely helpful friends for years now and we think it's only fair to give them the credit they deserve.

So here are 100 pieces of advice spouted by characters that we should really do some listening to.

"You are not a beautiful or unique snowflake. You're the same decaying organic matter as everything else."

"Until you start believing in yourself, you ain't gonna have a life!"

"Sometimes you have to bend with the breeze or you break."

"Named must your fear be before banish it you can."

"There are three rules that I live by: never get less than twelve hours sleep; never play cards with a guy who has the same first name as a city; and never get involved with a woman with a tattoo of a dagger on her body."

"Get busy living or get busy dying"

"We all need mirrors to remind ourselves who we are."

"Men fear most what they cannot see."

"We all end up dead, it's just a question of how and why."

"Man who catch fly with chopstick accomplish anything."

"There's nothing wrong with letting the girls know that you're money and that you want to party."

"Real loss is only possible when you love something more than you love yourself."

"All we have to decide is what to do with the time that is given to us."

"The only true currency in this bankrupt world... is what you share with someone else when you're uncool."

"Revenge is not good. Once you're done. Believe me."

"Because a man who doesn't spend time with his family can never be a real man."

“Life does not stop and start at your convenience.”

"Sometimes the best way to deliver a punch is to step back... But step back too far and you ain't fighting at all."

Back To the Future

"If you put your mind to it, you can accomplish anything."

“You ask how to fight an idea. I’ll tell you how. With another idea.”

"Death is a surprise party. Unless of course you're already dead on the inside."

“When you get old, in life, things get taken from you. I mean, that's a part of life. But, you only learn that when you start losing stuff."

The Outlaw Of Josey Wales

"If you lose your head and you give up, then you neither live nor win. That's just the way it is."

Butch Cassidy And The Sundance Kid

“Don’t ever hit your mother with a shovel. It leaves a dull impression on her mind.”

“You know what the trouble about real life is? There's no danger music.”

"A gold medal is a wonderful thing. But if you're not enough without one, you'll never be enough with one."

“If you’re good at something, never do it for free.”

Willy Wonka And The Chocolate Factory

“A little nonsense now and then is relished by the wisest men.”

One Flew Over The Cuckoo's Nest

“Talent is luck. The important thing in life is courage.”

“The more you know who you are and what you want, the less you let things upset you.”

“Facts can be so misleading, where rumors, true or false, are often revealing.”

“The dead only know one thing – it is better to be alive.”

“If they can't start a meeting without you, well, that's a meeting worth going to, isn't it? And that's the only kind of meeting you should ever concern yourselves with.”

“An eye for an eye only ends up making the whole world blind.”

“Just because you are a character doesn't mean that you have character.”

“No matter how much you change, you still got to pay the price for the things you’ve done.”

“A laugh can be a very powerful thing. Why, sometimes in life, it’s the only weapon we have.”

“Do you know that the harder thing to do and the right thing to do are usually the same thing? Nothing that has meaning is easy.”

The Killer Inside Me

"It's better to help people than garden gnomes."

“It’s huge to finally embrace the life you never planned on.”

Once Upon A Time In The West

“Taking it easy is the first thing a businessman should do.”

"Human beings were not meant to sit in little cubicles staring at computer screens all day, filling out useless forms and listening to eight different bosses drone on about about mission statements."

Eternal Sunshine Of The Spotless Mind

"-Ism's in my opinion are not good. A person should not believe in an -ism, he should believe in himself."

“Love is not a feeling, it's an ability.”

“Wherever you run into it, prejudice always obscures the truth.”

“Losers are people who are so afraid of not winning, they don't even try.”

“I just happen to think people are better off doing something they actually like.”

“Kids lose everything unless there's someone there to look out for them.”

"Marriage is like a tense, unfunny version of Everybody Loves Raymond, only it doesn't last 22 minutes. It lasts forever."

"You're your problem...and you're also your solution. "

“You don't want to get laid, man. It leads to kissing and pretty soon you have to talk to them.”

“Never tell tales about a woman. No matter how far away she is, she'll always hear you.”

"If you're part of a crew, nobody ever tells you that they're going to kill you, doesn't happen that way."

“The thing that haunts a man the most is what he isn’t ordered to do.”

“There's enough religion in the world to make men hate each other, but not enough to make them love.”

"The older you get, the more rules they are going to try and get you to follow"

“Worrying is like a rocking chair. It gives you something to do but it doesn't get you anywhere.”

“Failure is never quite so frightening as regret.”

"Never give up and good luck will find you."

“Nobody takes a picture of something they want to forget.”

"Life is pain, Highness. Anyone who says differently is selling something."

“You know what the scariest thing is? To not know your place in this world. To not know why you’re here.”

"A man can convince anyone he's someone else but never himself."

"We don't know how far the ripples of our decisions go."

"Flying a plane is no different than riding a bicycle, just a lot harder to put baseball cards in the spokes."

"If you wanna rock, you gotta break the rules. You gotta get mad at the man!"

"Marriage is punishment for shoplifting in some countries."

"Life is like a movie. Only you can't pick your genre."

“Sex is the game. Marriage is the penalty.”

This Is Spinal Tap

“It’s such a fine line between stupid and clever.”

Up In The Air

“Life’s better with company. Everybody needs a co-pilot.”

“Screws fall out all the time, the world is an imperfect place.”

“Two wrongs don't make a right but three rights will make a left.”

“If you want to have freedom, you’ve got to go where the freedom is.”

Harry Potter And The Philosopher's Stone

"Being an actor's no different than being a rugby player or construction worker, save for the fact that my tools are the mechanisms which trigger human emotion."

"Truth hurts. Maybe not as much as jumping on a bicycle with the seat missing, but it hurts."

To Kill A Mockingbird

"You never really understand a person until you consider things from his point of view. ... Until you climb inside of his skin and walk around in it."

“The opportunities of most people are determined by forces they do not even see.”

The Color Of Money

“Money won is twice as sweet as money earned.”

“There are opportunities in life for gaining knowledge and experience. Sometimes it is necessary to take a risk.”

“The more difficult something is, the more rewarding it is in the end.”

“You are what you love not what loves you.”

"When fortune smiles on something as violent and ugly as revenge, it seems proof like no other, that not only does God exist, you're doing His will."