Break any smart display down into its constituent parts, and it might look rather familiar. This ostensibly fresh gadget basically combines a smart speaker with a tablet - then throws in a stand to keep it upright while you go about your business.

UPDATE: There’s currently a fantastic 26% off the Google Nest Hub. Now just £87.50, this smart display has a 7-inch touchscreen, which can be used as a digital photo frame. Because it’s a smart display, you can also use your voice to control compatible devices including lights, the thermostat and the TV.

That’s not to undersell the impact this product mash-up is having, however. Being able to have all kinds of information and media at your beck and call while cooking, cleaning, and working is a powerful thing indeed.

The flexibility of interacting with that content through touch or vocal prompts makes the smart display the ultimate all-in-one home assistant. And it explains why multiple tech and internet companies are trying to gain a foothold in the smart display market.

Here are eight of the best contenders. Upvote your favourite. 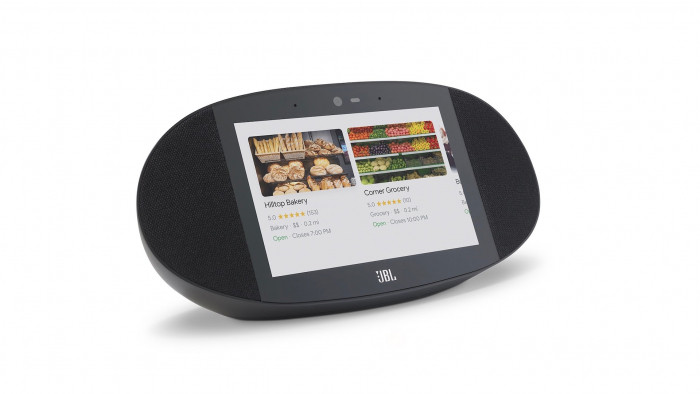 JBL is an established provider of portable speakers and headphones, and it has stepped into the smart display market with real authority. With the JBL Link View the brand has wisely left the software smarts to Google. It focuses its attention instead on producing some of the best audio quality of any device on this list. With an 8-inch display more than holding its own on the visual side, this is a remarkably complete smart display. 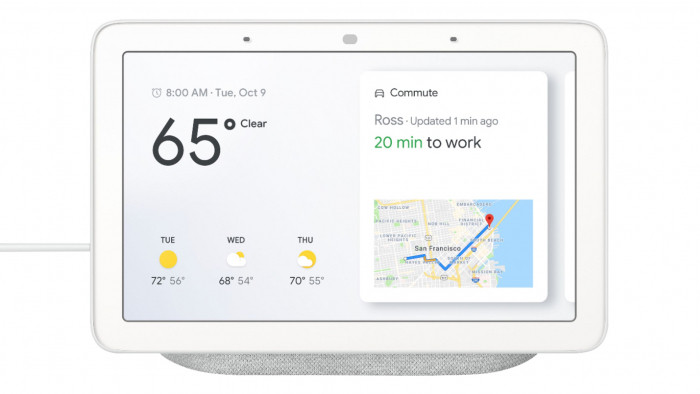 The smart display formerly known as the Google Home Hub is a well-priced container for Google’s software smarts. Google Assistant responds to all manner of queries in a natural fashion, while clever integration with the peerless Google Photos can turn the device’s crisp 7-inch display into a beautiful digital picture frame. There’s no camera for video chat, unfortunately, but that will come this summer with the 10-inch Google Nest Hub Max. 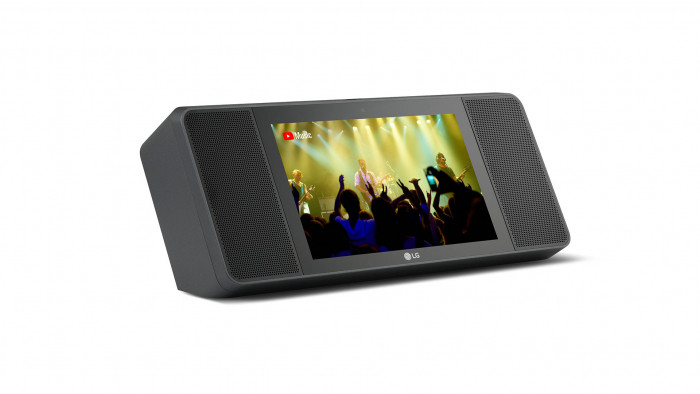 We’d be tempted to describe the LG ThinQ WK9 as the runt of the initial Google smart display litter, if only for its ugly looks. But there’s nothing puny about the WK9’s boombox-like proportions. Twin 20W speakers flank an 8-inch touchscreen. Yep, this is all about the audio, with the kind of thumpingly bassy output you’d normally expect of a dedicated sound system. This one is for the party'ers. 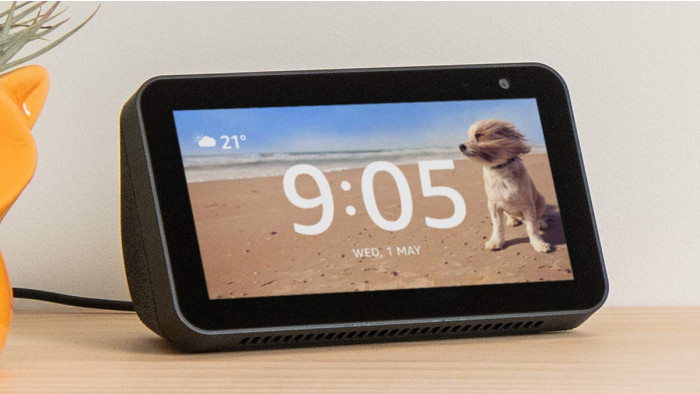 Okay, we'll admit it - we're smitten with this device. Having had the original Echo Show for a while now, we just couldn't get on with its size or looks. The 5.5-inch display on the new Amazon Echo Show makes so much more sense, and it looks great, too. Couple it with some great privacy options and the ability to make calls through it for free and what you have is a seriously smart display. 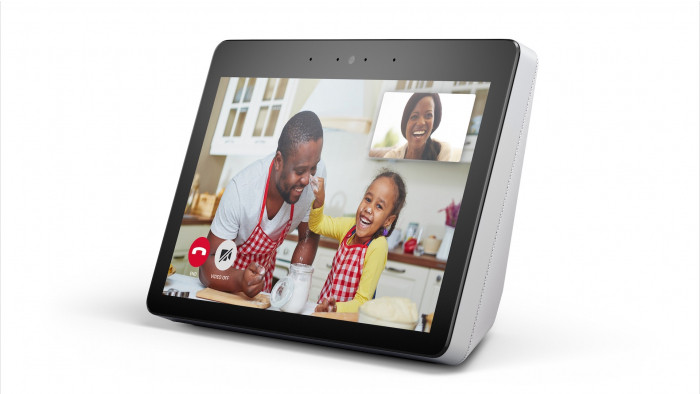 Amazon made home assistants popular in the first place, so it shouldn’t come as too much of a surprise to learn the latest Amazon Echo Show is rather good. It packs a large 10-inch display, a smart fabric design, and of course access to the highly regarded Alexa personal assistant, not to mention Prime Video content. Twin rear-firing speakers produce decent sound, and you can initiate calls with fellow Alexa users. 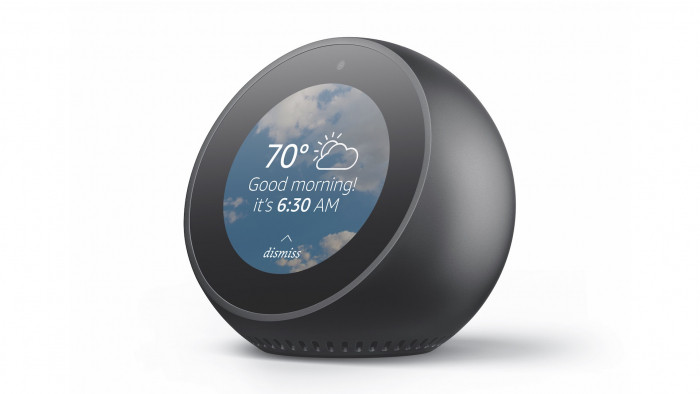 If you don’t need the widescreen features of some of the bigger smart displays on this list, the Amazon Echo Spot should prove perfect. Its compact 2.5-inch circular display is great for visualising basic Alexa queries, such as weather reports and web searches. Just don’t go asking it to play too much video content, because that’s not what it’s about. The Echo Spot is also significantly cheaper than most of the other smart displays on this list. 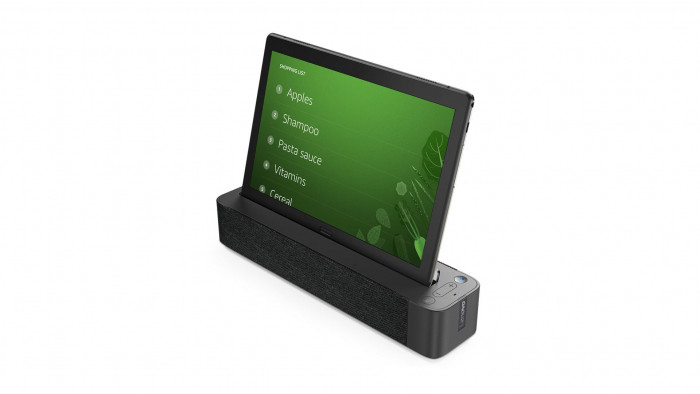 We’ve already mentioned that smart speakers are essentially hybrid devices, so we’re not sure what that makes the Lenovo Smart Tab P10. A deconstructed smart display, perhaps? It’s essentially a middling 10-inch Android tablet that, when plugged into the supplied speaker dock, becomes an Alexa-powered smart display. There’s a degree of flexibility here its rivals can’t match, though its smart speaker functionality isn’t quite as polished or intuitive as the more focused alternatives. 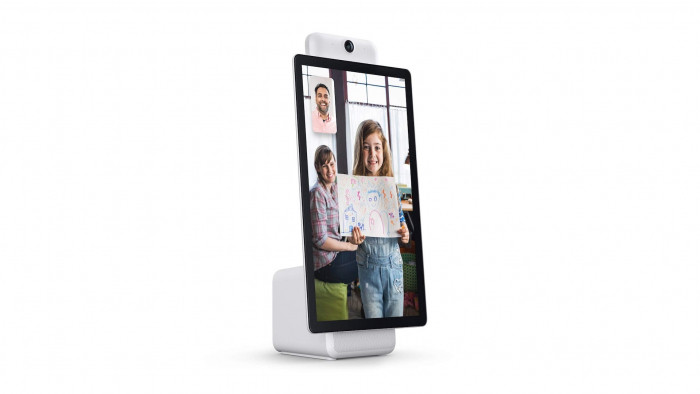 The Facebook Portal family is now available in the UK. With 15.6-inch and 10.1-inch options, the Portal could have been perfect for those who wanted a fuller media experience, but video streaming compatibility is rather limited. The main focus here is on placing Facebook Messenger video calls, supported by superior camera and mic tech, and software that cleverly tracks the caller around the room.

That’s less than the RRP of one
Smart Home 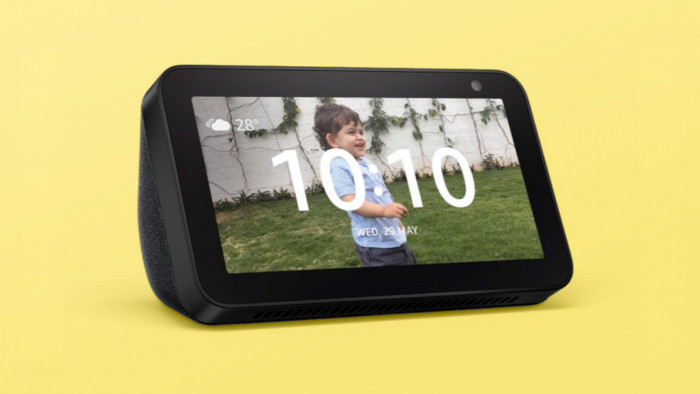 Digital assistant + screen + speaker for under £50