Whether you crave a juicy IPA or a heavy stout, there are few more satisfying feelings than sipping a beer you’ve crafted at home. More Brits are getting their DIY beer kicks by embracing the joy of homebrewing.

However, starting out can be daunting. Recipes are everywhere, from beginner to intermediate to expert, but you do need to spend a few quid on some basic equipment to get started.

Most homebrewers start small and expand their process and equipment as knowledge, skill levels and confidence develop. This beginner’s equipment list is designed for those using malt extract (rather than all-grain) as the sugar source to brew their beer, coupled with a small proportion of speciality grains to add distinctness in style.

A lot of these things come as part of homebrewing kits, which are a great jumping off point for budding homebrewers. They introduce you to most aspects of the process while leaving plenty of room to grow. Here are some of the items we consider to be essential and some upgrade picks.

This isn’t the only way – everyone has their own process – but it’s the way we learned. Cheers! 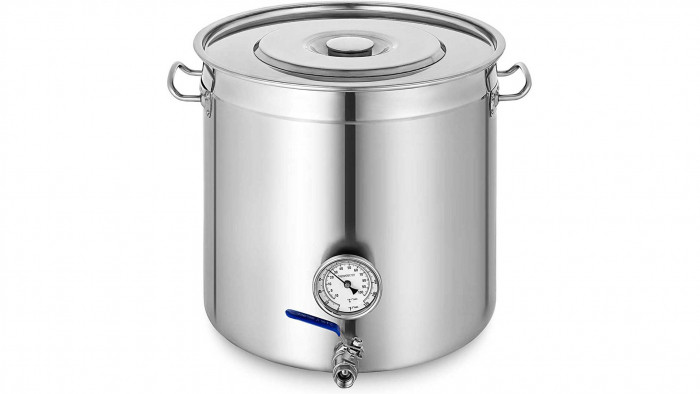 A brew kettle can be really fancy, or just the largest pot you have in the house. This is where many beginner brewers steep a small amount of specialty grains in a bag, in a process called mashing, before boiling a solution with malt extract and hop additions to create wort (young beer).

Initially, you do not need a massive brew kettle because many home brewers start with small 1 gallon batches or supplement concentrated wort with water after the boil. However, we’d recommend a 5-gallon (23 litre) pot. 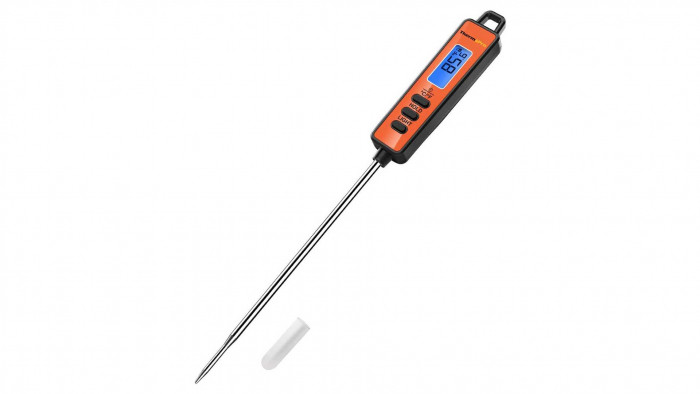 An accurate thermometer is invaluable during the mashing process. Grains need to be steeped at the correct water temperature (and held there for an hour) depending on the style of beer, and then rinsed (sparged) with water at the correct temperature. Before pitching your yeast, you must ensure the wort is cool enough, otherwise you’ll kill your yeast cells before they can do their work. 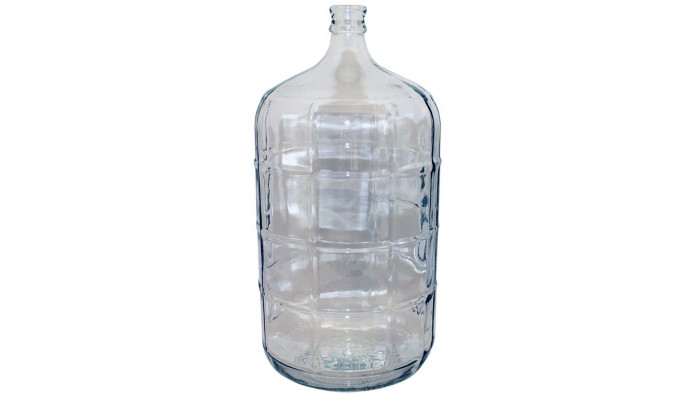 Once you have cooled the wort (use an ice bath, or buy the immersion chiller in this guide) you’ll need to decant from the brew kettle to the demijohn (a plastic or glass container, often called a carboy). To do this, use a funnel with a sieve to filter out hop matter.

This is where the magic happens, the yeast you add at this stage consume the sugar and turn it into alcohol, producing CO2 as a byproduct. Here you’ll need an airlock and bung to allow the gas an escape route, while preventing bacteria from entering the beer. 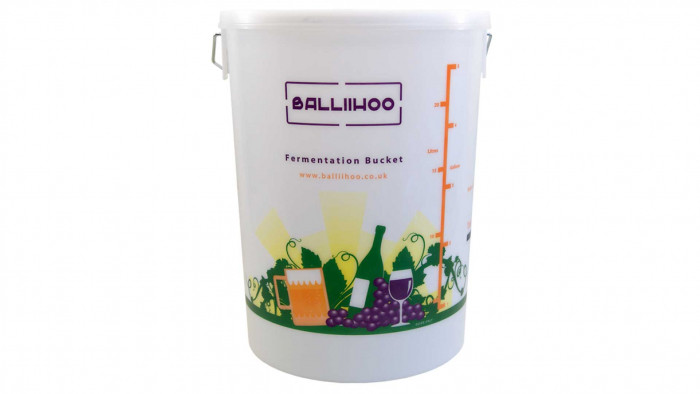 After 2-3 weeks, primary fermentation is complete. Some brewers like to do a secondary fermentation with new hop, fruit or even coffee additions, for a few days. When you’re happy the beer is ready (try it!), use an auto siphon and hose to decant into the bottling bucket, leaving sediment behind. Here it is mixed with a sugar solution, which will help to carbonate/condition your beer in the bottles.

NOTE: This bucket can also be used for secondary fermentation. 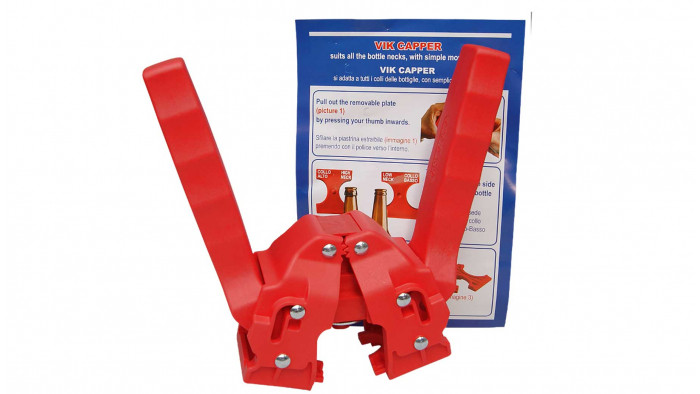 Most beginners start by bottling rather than kegging beer. Once you’ve decanted your beer into the bottling bucket, attach the filler to the bucket spigot and turn on the tap. Place the filler in the bottle and apply pressure until the bottle fills. Then release. Cap it with one of these cappers, store it somewhere cool and wait two weeks. 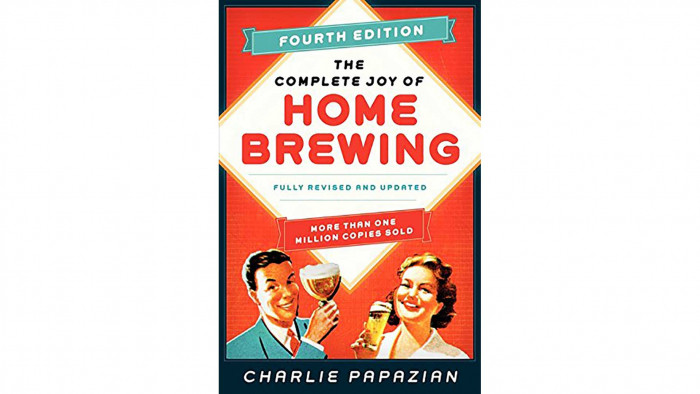 6. The Complete Joy Of Homebrewing

Before buying hops, grain and yeast, pick up the bible of homebrewing. Charlie Papazian’s seminal title is written in an accessible, welcoming style. You’ll learn processes and how to improve them, to graduate from extract to all-grain brewing and even learn to design your own recipes. We live by its edict. If everything seems to be going wrong RDWHAHB. Relax, don’t worry, have a home brew. 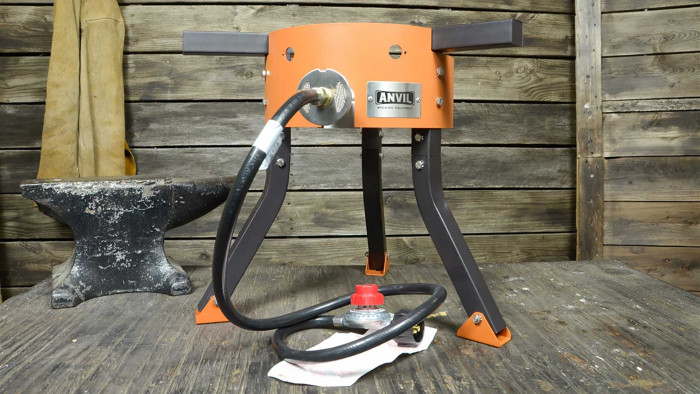 If you’re feeling flush, you can go for items like a gas burner straight off the bat. Or, like most brewers, you can gradually upgrade your brewing set-up over time as you become more competent and confident.

Home brewing can be a messy process, especially if you have boil overs. So it’s better done outside, or in the garage. A gas burner achieves this and also allows you to heat water and wort faster than on the stove top. 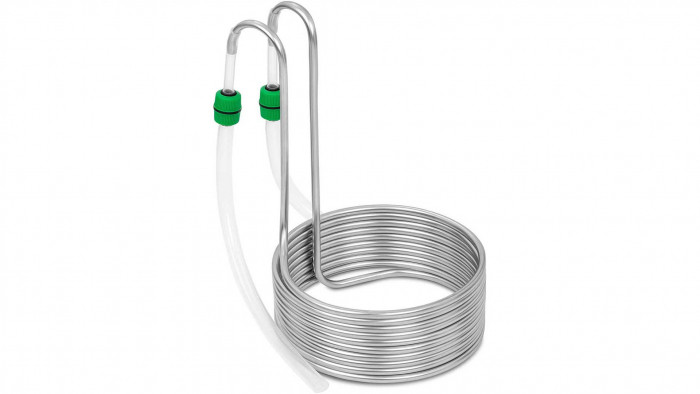 Wort should be cooled as quickly as possible to reduce the risk of bacterial infection and ruined beer. Unfortunately, cooling is the most frustrating part of the process. It takes hours and a LOT of ice. However, if you feed this item the coldest water you can summon it’ll come out of the other end hot, dramatically speeding things up. 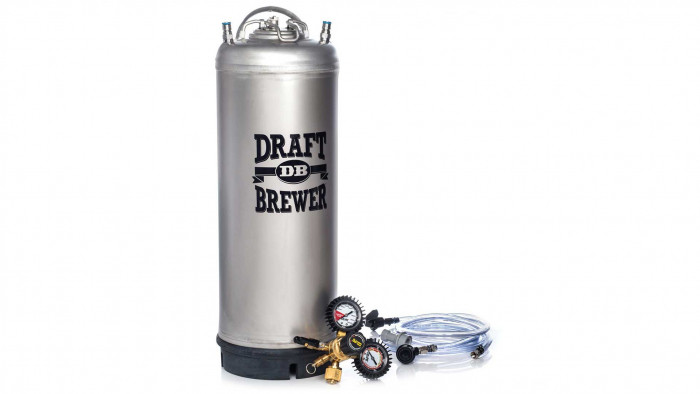 Cracking open a beer you’ve brewed after a long day is satisfying, but pouring one directly from a keg is next level joy. Kegging is a simple process to learn and, because you’re infusing with Co2 directly rather than waiting for bottle carbonation, you can drink your beer sooner. 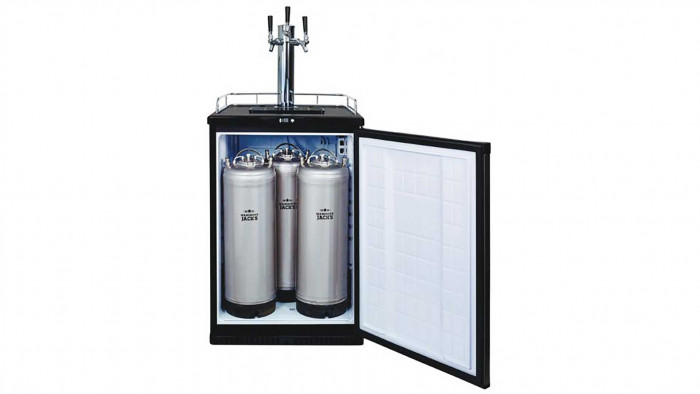 This is one we’re yet to pull the trigger on, but it’s top of the wish list. It’s a dedicated fridge for homebrew with space for the keg(s) and Co2 supply. And it has taps. Actual beer taps (which you know you’re going to customise) and a drip tray. Now you officially run your own bar. 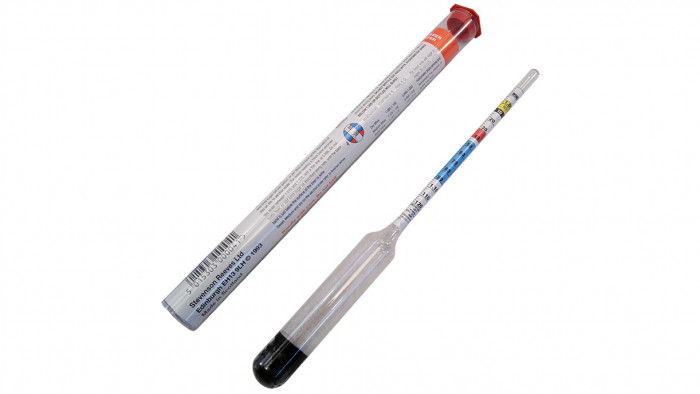 A cheap, but essential part of the set-up, a hydrometer reveals the strength of your beer by measuring the sugar content in the liquid. After you’ve boiled and cooled your full batch, take a sample, place the hydrometer in the solution and measure the reading. This will be your original gravity (OG). That number will drop as yeast consume sugars and turn them into alcohol. Your final gravity (FG) is when the yeast have consumed as much of the sugars as possible. This equation will give you the ABV percentage of your beer.

We recommend you buy two hyrometers. They break easily.

The ultimate whisky deals round up.
Alcohol