Because sitting back and relaxing was never part of the plan 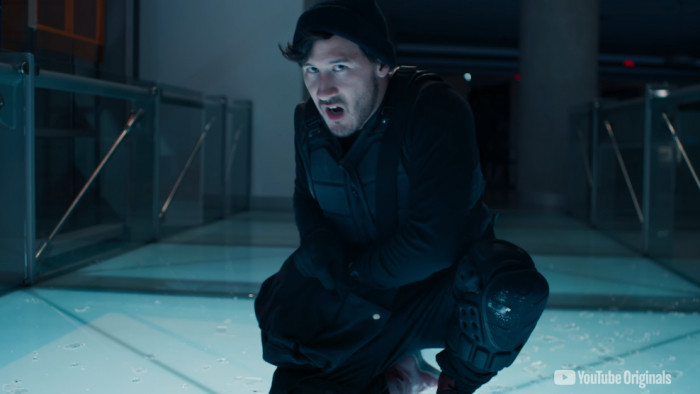 If, after watching Black Mirror’s interactive epic Bandersnatch, you found yourself thinking ‘man, I wish there were more interactive films about,’ then you’re in luck, because YouTube has heeded your call.

Announcing the platform’s first original interactive film in the form of an action-packed trailer, the forthcoming heist-themed special is set to star none other than, you guessed it, YouTubers - well, one YouTuber in particular to be precise.

Entitled ‘A Heist With Markiplier’, the clue to the film’s lead character is very much in the name.

The first trailer uploaded to his YouTube channel is packed with jump cuts featuring different locations - from the desert to the inside of what looks to be a museum. It’s a little on the slap-stick side, but then again, this was never intended to be an Oscar winning performance.

Opening with a heavy rumble, the panicked voice of Markiplier can be heard saying “This is it? This is really it?! This is going to change our lives forever.” It all sounds rather dramatic, doesn’t it?

With over 24.4 million subscribers, YouTuber Markiplier is best known for his Let’s Play videos - where a YouTuber screenshots their gameplay - focussing specifically on survival horror video games. And now, it appears, he may have to add actor to his list of credentials.

We know, we know, life’s incredibly tough when you have to move from the comfort of your gaming chair to make a living.

The first person film sees viewers faced with a variety of “life-or-death” decisions that culminate in 31 possible endings, with Markiplier - also known as Mark Edward Fischback - guiding you through a series of scenarios - all whilst dressed as a cat burglar we might add.

There are also said to be 61 different videos making up the interactive film in its entirety. Not quite Bandersnatch, but an interesting venture by YouTube nonetheless.

Although it’s YouTube’s first interactive full length special, Markiplier has ventured into the format before. Back in 2017 he dipped his toe into the pool of interactivity with a video called A Date With Markiplier.

Whether this film format will be the start of many for the platform remains to be seen, but for now, A Heist with Markiplier will be available to stream from October 30.