This seaweed gin comes direct from the Irish coast

Forget pink gin, this nautical offering is where it's at. 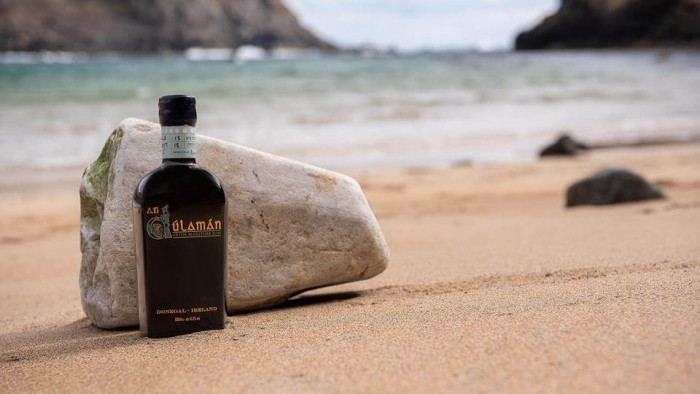 If you’re a fan of weird and wonderful gin flavours - and let’s be honest, who isn’t?! - this offering direct from Ireland might just be your next favourite drink. Or not, depending on whether you like your gin flavoured with seaweed.

The unique flavour - entitled An Dúlamán Irish Maritime Gin - is infused with locally harvested seaweed from Donegal and has been available since 2018, with a 57% variant, the An Dúlamán Santa Ana Armada Strength gin that's been barrel-aged in Rioja casks, also available.

It’s every inch the nod to the gin’s coastal roots, with the bottle design drawing inspiration from those washed up on the beaches of Donegal following local shipwrecks.

We’re pretty sure Jack Sparrow would even become a gin convert based on the packaging alone.

Created in Carrick, south Donegal, by husband and wife duo Moira and James Doherty, the distillery is the first in Donegal since 1841.

According to the brand’s website, ‘Dúlamán’ takes its name from an Irish folk song based on conversations between two seaweed collectors. It’s also the name of one of the five locally-harvested varieties of seaweed used in the gin - alongside six other botanicals.

The Donegal coastline is renowned for its rich bounty of seaweed, making it the perfect unique addition to any locally made gin.

“The concept was to use seaweed as a botanical but specifically to create a ‘gin of the sea’ and not ‘of seaweed.’ So we set about distilling as many botanicals as we could lay our hands on including the seaweeds as we could to learn their properties,” founder James Doherty told the GinFoundry.

“Using them fresh, dried, frozen; understanding their idiosyncrasies and seeing how they went together. The biggest challenge apart from the bizarre way some of the seaweeds (carrageen moss particularly) behave when kettle infused was the challenge of retaining the fresh, salty, umami flavours from the fishy, dirty flavour was a major headache.”

Retailing at £33, the Irish gin has a 43.5% ABV differentiating itself from liqueur-style offerings that tend to be infused with sugar.

Looking to get your hands on a bottle? You’ll be pleased to hear that the gin is now available in 15 countries around the world and can be purchased from the distiller’s online shop or on Amazon for £29.95.