Will Poulter on Dopesick, meeting Batman and growing up on movie sets

Exclusive interview with the star of the dramatic, new Disney Plus show. 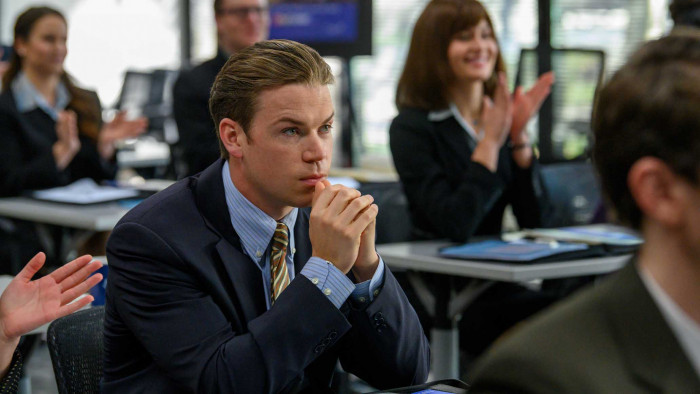 Dopesick, the latest Star on Disney Plus show, is a gut punch. Based on the book Dopesick: Dealers, Doctors and the Drug Company that Addicted America, the true tale charts the rise of the horrific opioid epidemic that has spread across America.

Created by Danny Strong (Empire), Dopesick has an all-star cast which includes Michael Keaton, Rosario Dawson and soon-to-be Marvel superstar Will Poulter (he was recently cast as Adam Warlock in The Guardians of the Galaxy Vol. 3).

ShortList sat down Poulter to talk about Dopesick, working alongside Michael Keaton and what it's like being someone who has grown up on movie sets...

ShortList: How much did you know about the true story of Dopesick before the show?

Will Poulter: It was a headline for me. I heard of the expression ‘opioid abuse’, I'd heard of Oxycontin and I’d heard of the opioid epidemic. But I really didn't know what that looked like, what that meant.

SL: Billy Cutler tells so many lies to sell the drug, it's hard to keep up. How did you get into the mind of someone like that? And how angry were you when you were reading the script?

WP: It's really hard to have said half the things that Billy says in the show regarding the amount of lying and the amount of deceit that went into his sort of sales push.

It's certainly disturbing but I think it's more disturbing when you speak to Danny [Strong, creator of Dopesick] and you find out that a lot of the script is transcript, literally lifted out of the Purdue [Pharma] training pamphlets - there was very little dramatisation.

The bribery, the coercion, the emotional manipulation, the fact that Purdue sales reps had psychological breakdowns of their doctors and they used things in those breakdowns in order to manipulate them. That's all real. The fact that Purdue fabricated data, the fact that they introduced pseudo scientific concepts into the market... all of these things seem like points of dramatisation, but they were just kind of cold, hard facts that we were infused into the story.

SL: What was it like working on something where the story is still evolving?

WP: Well, from a legal perspective, I often have to finish sentences with ‘in my opinion’. But it's a real privilege to be involved in something that is active. As an actor, you don't necessarily feel like often your work kind of goes beyond a certain point. It's hard to feel like your work has any kind of real meaningful impact, after folks leave the cinema or turn off their screen. Sometimes you get concerned about that.

What's been nice about this project is that there’s an active engagement with with the issue and getting the chance to work with someone like Danny, who is just as much of an activist as he is someone who works in entertainment industry, or Rosario Dawson, who I think is equally an activist as an actor, that's just a real honour for me to be around those those people and learning from them.

As you say, it's a very real and present issue. The opioid epidemic isn't something that went away. Opioids can be attributed to just under 74% of deaths by overdose in the States. 25% of the incarcerated population have opioid addiction. Something like every 15 minutes a child is born with withdrawals to opioid symptoms. This is an issue that has not gone away, it's continued almost in the shadow of the pandemic. So Dopesick’s release is pretty timely, especially while there's so much sort of litigation and legislation or work being done around Purdue and the Sacklers.

SL: You filmed in Virginia as well, a backdrop that was obviously very much devastated by the crisis. How was that?

WP: It felt entirely necessary that we went and shot it there. Virginia and West Virginia are almost the epicentre of this crisis. It was very emotionally charged for a lot of the crew members, as well because the degrees of separation between, I would say most people in America and the opioid crisis are few. So they're in Virginia and West Virginia and many people working on the show have lost someone very close to them. Or they have had some kind of experience themselves with the drug. It was quite an emotionally charged environment a lot of the time but we were heavily reliant on the contribution of many Virginians in order to get the story made.

SL: What was it like working with the legend that is Michael Keaton?

WP: Man, it was unbelievable. I met Batman and Birdman! I felt so lucky, especially as I had so many amazing meaty, uninterrupted conversational scenes with him and that's the sort of thing you dream of doing as an actor.

SL: You've made both movies and TV - how different is it working in the two mediums?

WP: With TV. you get the opportunity to explore a character’s arc over a longer period of time. It's quite fun to live with them for that bit longer and explore arguably more than you might in a film format. With Dopesick, it jumps around a lot in terms of time period, so to play a character over the course of 10 years was really cool. There's a pretty major jump, without getting into spoiler territory, towards the end of the show and, yeah, having that opportunity was awesome and unlike anything I'd really done before. I loved it.

SL: You started as a child actor, what has the experience of growing up on film sets been like?

WP: Because I haven't known anything different, I don’t know what I have missed out on - if I've missed out on anything. My life's been enriched by the experience and I'm so grateful for it. I'm really lucky that I have a supportive family who allowed me to do acting and a school that kind of facilitated it.

I think getting the opportunity to work in ‘adult spaces’ if you like and interact with people from all over the world and different backgrounds, it's just really enriched my life experience. I'm so grateful for it.

Dopesick begins streaming on Star on Disney+ on Friday 12th November as part of Disney+ Day. These are the best Disney Plus shows you can stream right now.