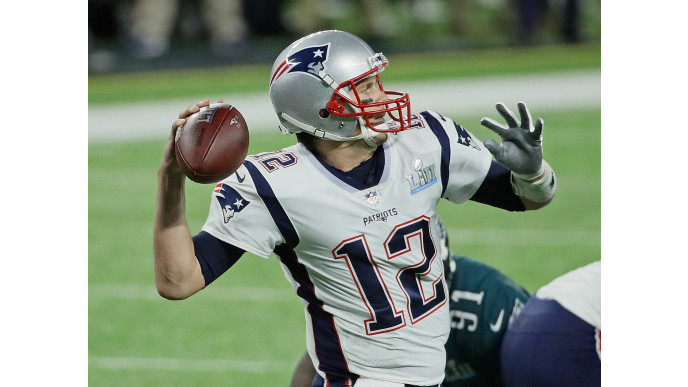 Another year, another chance to cheer for or against (but probably against) Tom Brady and the New England Patriots.

The Pats, who lost out to the Philadelphia Eagles in 2018, have given themselves a chance at redemption after an overtime victory over the Kansas City Chiefs in the AFC Championship.

They will take on the LA Rams, who needed overtime themselves to edge past the New Orleans Saints, with the game taking place in Atlanta on Sunday and starting close to midnight UK time (so Sunday night/Monday morning for us).

But you knew all of this. What you really care about is where you can watch. Don’t worry – we have got you covered.

If you want to go big and get tons of food included, Covent Garden’s Balthazar has a huge menu full of all the American snacks you can think of and then some. Staples like mac & cheese, hotdogs and nachos, sure, but also steak sandwiches, a free Super Bowl cocktail on arrival and pastries to take home when the game wraps up in the early hours. There’s even a self-serve popcorn machine!

Jack Daniel’s is putting on a big ‘Tailgate Party’ at the pub in Stratford Westfield, which as we all know is the most American part of London. The premium tables (including wings, pizza, drinks and a private beer pong table) might have already sold out, but they’ve announced a competition to win the last few tickets.

If you’re getting a decent sized group together, Belushi’s might be the way to go. Their packages allow for tables of between four and eight people, with food, drinks, table service and goodie bags included. If you get the biggest package – a table for eight – it’ll come with 80 wings to share between you.

Nachos, wings, beer and a “halftime feast” is what you get for your ticket at the BBQ chain, which has been a reliable venue for Sunday night football for a while now. If we were to guess, we might speculate that the halftime feast includes some sort of barbecued pork or beef cut, possibly both, along with various sauces and sides. Not bad for what’s essentially a very extravagant midnight snack.

No tiered options here, just a straightforward £25 ticket that gets you a guaranteed seat, a beer on arrival, nachos, wings and assorted entertainment throughout the night. ‘Half time prizes’ are listed on the event page, and we’re curious as to what that entails.

If your requirements for the Super Bowl are “a lot of great free stuff on entry”, Flat Iron Square’s event looks like a blast. For jusr a fiver you’ll get a pint of Hop House 13 Lager, a Bulleit Bourbon hip flask, and buttermilk fried chicken and fries from Mother Clucker. We’re no mathematicians but we’re pretty sure that would normally cost you more than a fiver, so you’re essentially winning from the get-go.

2019 marks the 10th year of The Grand in Clapham hosting a Super Bowl party, so inevitably they’re going big. Think huge screens, live DJs and cheerleaders, while you’ll have the chance to book a private booth with waitress service for up to six people. Would you pay a premium to ensure you get everything you want brought to you without venturing to a busy game-day bar? Probably, right?

If you haven’t been to Greenwood, you probably don’t appreciate just how massive the Victoria sports bar is. They’ve got 19 screens across multiple floors, and it’s £10 to guarantee a spot for the big game. Their regular menu includes plenty of your classic sports bar fare, including burgers, pizzas and a wide selection of beers.

The Hard Rock Café is once again bringing out a special post-midnight game day menu for the Super Bowl, and you can get yourself a beer and bar snacks just for showing up. As the game goes on – and we’re not ruling out overtime once more – you’ll be able to get a very American experience, complete with cheerleaders and popcorn.

Watching the Super Bowl at an actual club isn’t to everyone’s tastes, but then again, if you’re going out close to midnight and staying out until around 5am, why not head somewhere that’s used to those keeping those hours. It’s £5 to get in to the Clapham favourite, while a VIP ticket will entitle you to two bottles of Bud and a ‘giant’ hot dog. We’d be lying if we said we weren’t desperate to find out just how giant we’re talking.

If you were thinking of heading east, the Leyton Star has been doing this sort of thing for a couple of years. Tickets are cheap, too – just a fiver, and that includes popcorn and a free drink – while the food and drink menu is going to be extremely American. Oh, and they’ve promised prizes for the best-dressed guests, so get your Uncle Sam costumes ready.

Shoreditch pub The Long Arm has big plans, and wants to get you in as early as possible. Pay £10 and you can secure your spot, providing you’re in by 9pm, while you can contact them separately for table bookings. The regular menu has a pretty American flavour already, with wings, burgers and loaded fries, so expect more of the same.

Hackney’s Bad Sports are putting on a big party in East London, with beer, whiskey, wings and even commemorative Super Bowl t-shirts for those who pick up the top-priced tickets. They’ll have live DJs, a ‘Nerd Zone’, and the brilliantly unspecific promise of “dumb shit”.

The burger specialists are turning their Covent Garden space into a fan zone for Super Bowl LIII, with their seated tickets including a beer and a plate of wings. You also won’t need to rock up early, with ticket-holders able to enter any time before 1am, while food and drinks will be on offer all night.

If you think free beer is passé and prefer the sound of a free margarita, Chelsea taco joint Mezcalito might be your best bet. It’s a ticket-only event, with doors opening super-early at 5pm, allowing you to have a full dinner before the game begins if you fancy. Oh, and there’s a special one-night-only menu.

After some big game days during the 2018 World Cup, the Scandinavian-themed Nordic Bar is giving the ‘other’ football a go with its Super Bowl party. They sold out last year, and are returning with tiered tickets (basically, decide if you want to stand or sit), which include free beer for all. Food includes huge game day platters, while they’ve also got a shots wheel which you’re almost certain to try out.

We’ve had Mexican and Scandinavian themed Super Bowl venues, so it should be no surprise to see the Germans getting in on the action. It’s not just about pretzels and pork shanks, though – you can get hotdogs, nachos and the like to pair with a frankly ridiculous selection of German beers, while anyone who books ahead to sort themselves a seated ticket will get a free beer on arrival.

Covent Garden’s Roadhouse has sold out for the last few years, and that might have something to do with them shipping in a bunch of American beers purely for the Super Bowl. Tiered tickets are in place, with the top end guaranteeing you beer, a hot dog and a chance to jump the queue if you show up before 11. The last entry is at 1.30am, if you’re the kind of person who likes to make a fashionably late appearance.

Ticking all the ‘American sporting event’ boxes with beers, hotdogs and cheerleaders, and it’s a chance to pretend it’s summer during one of the coldest parts of the year. The regular menu includes tacos and summery cocktails, and you can get in any time before 1am.