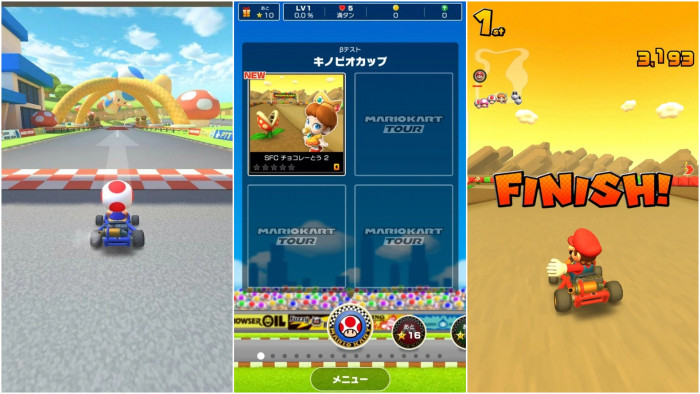 If you don’t fancy dropping £279 on a Switch and Mario Kart 8, there’s soon to be a cheaper way of stealing someone’s victory moment with a vindictive blue shell attack. Well, probably cheaper anyway.

Y’see, the beta for Mario Kart Tour has opened in Japan and the United States, and the first Mario Kart game for mobile phones looks to be light on the gameplay mechanics and heavy on the microtransactions.

Yep, here be loot boxes. Five green gems give you the chance to unlock a new driver, kart or glider, and there’s also a stamina system that will prevent you playing too much without a wait or a payment. You don’t get that on the Switch version – well, unless you forget to charge it.

The reliance on microtransactions is disappointing, but hardly surprising given Nintendo tried selling Super Mario Run on iPhone and Android, only to find it didn’t make enough cash. The company fixed that with Fire Emblem Heroes, which can’t stop printing money.

Anyway, microtransactions or not, it looks reasonably Mario Kart-y, only with allowance made for the lack of a gamepad. Acceleration is automatic, and you swipe left and right on the screen to steer. Some courses will look familiar to anybody who owned a SNES, GameCube DS or 3DS, too.

Anyway, here’s a video of it in action, from somebody who hasn’t quite mastered the art of clickable YouTube titles:

While the beta is a closed affair for a limited number of Android owners in Japan and the United States, the full game should be available to all this summer. Microtransactions or not, this is a day-one download for us. Bagsy Toad!