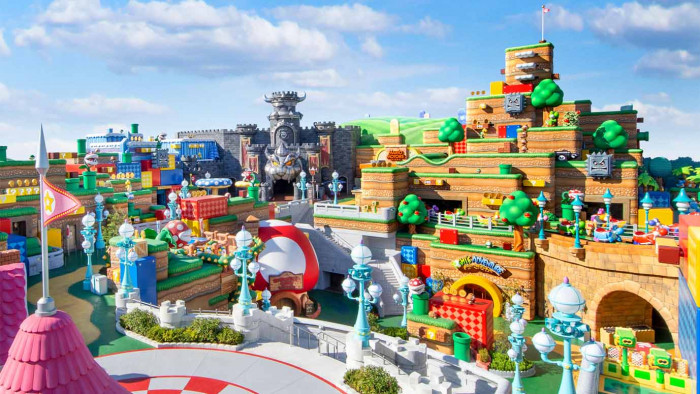 2020, crap weren't it? Well, 2021 is all set put a halt to all this crapness, if Universal Studios Japan has its way. It has taken the wrappers off of its new theme park area and it's all about Nintendo and Mario.

We knew that Super Nintendo World was being built, as a number of leaks had come from the construction site. But now the area is ready and it looks everything we want from a Nintendo-themed, er, theme park. And the best news is that it is launching in early 2021, February 4th to be precise.

The park is all part of a 20-year celebration of Universal Studios in Japan and features all-manner of ridiculously cool-sounding rides. Guests will also be issued a Power-Up Band that will keep a score of all their adventures in the park and allow them to 'punch' blocks to gain things like virtual coins to spend in the park.

Rides include: Mario Kart: Koopa’s Challenge. Here "The world of Mario Kart and its courses all come to life at the park using state-of- the-art technology! Guests will throw shells and take out opponents to race ahead with Mario and Princess Peach! The all-new, life-sized Mario Kart experience has countless thrills and excitement in the world’s first Mario Kart ride experience."

Another is Yoshi’s Adventure. This one takes place on the back of Yoshi and you will follow Captain Toad on an adventure, collecting eggs along the way.

Alongside other rides, most of the action will be taking place in Bowser’s Castle. According to its makers, the "inside of the castle has a mysterious atmosphere with stone walls, spiked fences and heavy iron doors along with a massive stone statue of Bowser at the center of a grand staircase. The powerful scale of the statue makes one feel as if Bowser will suddenly start to move."

As for the Covid-19 spectre, Universal Studios has said it is ready with strict measures (including a strict capacity, sanitising and the like) for when it opens its doors in February.

Can't wait that long? Then you can get Mario Kart Live: Home Circuit in your home and it's fantastic.