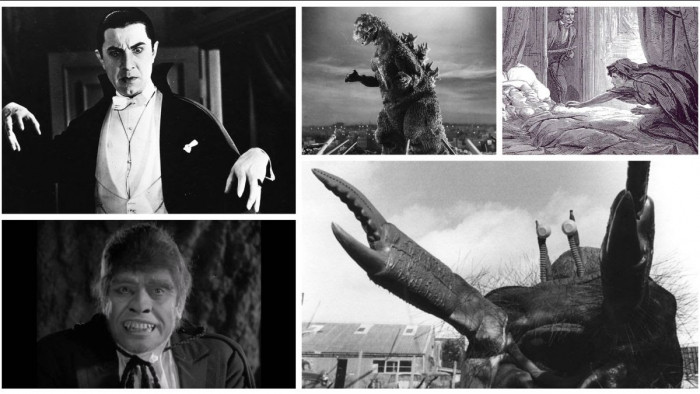 Monsters, of course, are central to my work – probably, to my life. I was a child in the 1960s, when TV shows like The Outer Limits and Doctor Who were delivering monsters every week, and first got interested (okay, obsessed) with horror film and literature. And after that, general film and literature in the 1970s, when I’d stay up late on Friday nights and watch old Universal and more recent Hammer horror films featuring the classic clutch of screen monsters.

I stuck together those glow-in-the-dark Aurora hobby kits of the Famous Monsters, including such also-rans as the Old Witch and the Forgotten Prisoner. My first attempts at writing plays and stories recycled these monsters, and if I had no ideas for new stories I drew pictures.

I loved – and continue to love – monsters… which, in genre terms, is sometimes a problem because, of course, monsters aren’t meant to be our friends. They’re supposed to be scary. Some of the most interesting are tormented and guilt-ridden, but there’s a certain purity of appeal in those who are either unrelentingly destructive or make a conscious choice to be Evil. Here, off the top of my head, are five of my favourites.

Kim Newman's new book Anno Dracula 1999: Daikaiju, is published by Titan Books and is available to buy from 22nd Oct. Buy now in Paperback or for Kindle.

Okay, you have to use your imagination here. The Macra are giant alien mind-controlling crabs, who featured in one Doctor Who serial in 1967. They showed up briefly years later to bother David Tennant, but weren’t nearly as scary. In the 1960s, in black and white, Doctor Who produced a lot of monsters – some, like the Daleks and the Cybermen, entered playground legend and popular culture. Others came and went, leaving behind only nightmares.
Ian Stuart Black’s script for this serial has a creepy idea about an enclosed society with enforced jollity and monsters in the shadows, but that went over my head as an eight-year-old – it was the big claw reaching into frame like a music hall hook to pinch a victim in a cliffhanger ending that gave me bad dreams and had me insisting the hall light be left on. The episodes are lost – though audio survives and there’s an animated recreation (not too scary to me these days) around – so perhaps the fact that I can’t look at the real thing again and see it for two shillings and sixpence worth of BBC special effect it is, means it’ll never lose its power. That claw is still out there in the dark, evilly clacking.

Hands down, my favourite monster. The first classic horror movie character I saw – in the shape of Bela Lugosi in a starched shirt and cloak – and the one I’ve most often invoked in my work, though I’ve tended to follow Bram Stoker and prefer the Count to be a shadow over things rather than onstage all the time, exchanging drawing room chit-chat. I think of Dracula as a many-faced monster – Lugosi, Christopher Lee, Jack Palance, Udo Kier, Louis Jourdan, Max Schreck and Klaus Kinski, even George Hamilton and Adam Sandler. But he should always have a cloak.

I come late to the cult of the Big G. The Toho monster movies weren’t much seen in the UK in the 1970s, though I remember a double bill of Godzilla vs the Smog Monster (with its rousing and still-apt theme tune ‘Save the Earth’) and The Thing With Two Heads. Like all monster purists, I prefer the original, unstoppable, Blue Oyster Cult-approved version of Gojira in the 1954 black and white film to the goofier stuff that followed, as the big fire-breathing lizard battles other creatures and eventually turns heroic … but I’ve come to like every iteration of the greatest kaiju of them all.

I suppose Hyde isn’t strictly a monster, just a horrible person hidden inside someone else … but R.L. Stevenson’s The Strange Case of Dr Jekyll and Mr Hyde is the most perfect of the classic monster texts, and the dual role has been played in many films I love (I think Frederic March was the best J/H, though kudos to Martine Beswick as Sister Hyde). Interestingly, actors have tended to be better as Hyde than Jekyll – maybe because films tend to misunderstand the book and present the good Doctor as actually good rather than someone looking to get away with dreadful things while preserving his standing in society.

The archetype of the female vampire, Carmilla first appeared in a 19th Century novella by J. Sheridan LeFanu, and has shown up in a run of sexy horror movies (Blood and Roses, The Blood-Spattered Bride, Lust for a Vampire). Most films make her a domineering, hissing force of nature – that’s how Ingrid Pitt splendidly plays her in The Vampire Lovers – but LeFanu’s take is different, since his Carmilla is a cuckoo in the nest, a near-invalid who gets healthy while everyone else in the house falls ill. Passive-aggressive, dependent (as all vampires are by nature), transparent, and perhaps not even aware of how lethal she is to those she battens on, she’s a monster character type who doesn’t get much play but is unusually convincing.