Warning: the following will make your mouth water. 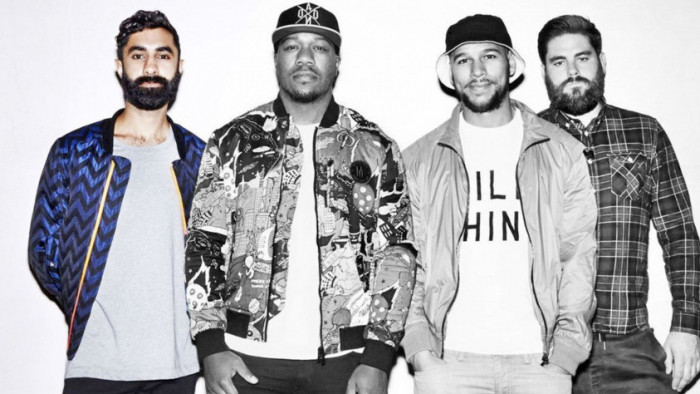 “I love cooking,” Amir tells us, “My life can be quite hectic, with a lot of travelling and a lot of studio time, so when I get home I like to do something completely different. For me, cooking is my hobby.”
And Iranian dishes are some of Amor’s favourites to make. Originally from Iran, where he lived with his family until he moved to London aged 7, the multi-platinum-record-selling star spoke us through some of his favourite Iranian comfort foods, which have fuelled his Brit and MOBO Award-winning music: “If I’m working from home in my studio, I'll still take time to actually make proper food. I feel like it's quite an important part of my life.”
One gig that’s kept him away from his hobby? Being the headline DJs at the recent after party for London’s biggest fireworks display in Battersea Park, partnered with Huawei, which Amir is speaking to us ahead of.
“It's gonna pop off! There are about 50,000 people expected, so it’s a huge show. We're playing alongside Norman Jay too, who’s a legend, so it's going to be a lot of fun,” Amir tells us.
“You can expect a lot of energy,” says the musician, of what fans can expect at a Rudimental DJ Set, “and myself and Kesi bouncing about on stage!”
That energy’s got to come from somewhere – it’s pure, delicious science. So it’s time to talk dins, after the after party.
Stock up on the saffron and ready the rose water - here are Amir’s five favourite Iranian foods…
Amir Amor was speaking ahead of headlining the Battersea Park Fireworks Afterparty to celebrate the release of Huawei’s new phone, nova 5T.

“Iranians have this thing called tahdig, which literally means ‘bottom of the pot,’ and it's basically the crispy layer of rice you get at the bottom when you cook it. We take full advantage of that - everyone's always arguing over who gets that at the dinner table.
Tahchin is almost entirely made up of that. It's a whole rice cake made up of crispy rice, with chicken, yoghurt and barberries in the middle, and saffron.
It's baked like a cake, so you get this layer of saffron-y, crispy rice on the surface. You flip it over when you’re done with it and it comes out of the pot and looks like a cake that you slice into.
It's proper hearty, warming food, for a cold day. It's banging.”
Picture credit: Renegadesaba

“I live in East London, and there's a little Afghan restaurant this side of town called Ariana, which is really good. It's a little bit different to Iranian food, but it's my regular around Mile End. When I go there, I’ll order the Ghormeh Sabzi.
It’s a super herby green stew with lamb, made of fenugreek, parsley, and coriander, and the herbs are actually pre-cooked, so they go a deep, green colour.
My family's from Shiraz originally, so their version has got potatoes in it, too. If you’re going to try Iranian food, Ghormeh Sabzi would be a really good one to start with because it’s so popular. When anyone thinks of Iranian food, it’s Ghormeh Sabzi.
Picture credit: Amin Majidi

“I make a lot of Zereshk Polo at home - that's probably my go-to. It’s Iranian food, so obviously, there’s a lot of rice and ‘Zereshk’ is the type of berry. It’s sweet and sour, with pistachios, barberries, saffron, rice and tahdig.
You fry out the barberries separately, and I put a little bit of lime juice in there as well. You can put a tiny bit of honey if you want in it too, to make it a little bit sweeter. It's so beautiful, it's proper homely for me; it takes me back to mum's cooking. And I just love saffron as well. Zereshk Polo is probably my favourite thing to make.”

“In our house we always had this hearty soup, called Ash-e Reshteh. As with a lot of Iranian things we have a huge influence from the Silk Road; we have influences from all over the place. And Ash-e Reshteh is actually a noodle soup you make using vermicelli noodles. Again, it's got fenugreek in it, and
and lentils, and kidney beans, and it's got this thing called Kashk on it, which is made from dried yoghurt, as a garnish on the top. Then we fry some beans in oil and chuck some fried mint on top of it, as well.
One of the best things about Ash-e Reshteh, other than the lentils and the fenugreek and the rest of it, is its got a lot of caramelised onion in it, and they spend a long time caramelising the onion, so it’s super sweet, and it’s got a really beautiful texture to it. Ash-e Reshteh was definitely common in my house. It's just a really beautiful hearty, thick, lentil and noodle soup.”
Image Credit: AilinParsa

“For dessert, we have our version of ice cream, called bastani. As with most Iranian dishes, it’s got saffron, pistachios and rose water in it, and it’s got this super gooey texture. It’s not like sorbet at all, or even like a normal ice cream that we're used to, it's typically almost stretchy when you eat it, and it's got little slices of frozen clotted cream in it as well.”
Image Credit: IDangerMouse

The best whisky to buy today - 28 to choose from.
Music