Robbie Savage on Wales, pranks and the players to look out for at Euro 2020 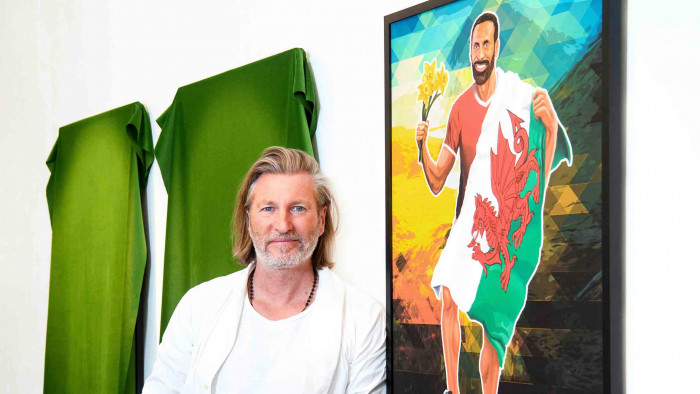 Robbie Savage is in a jovial mood. It's the first time that home nation rivals England, Scotland and Wales have qualified together for the tournament and to celebrate the fact, he's teamed up with Heineken - alongside Ally McCoist - to pull off a number of pranks on some footballing legends.

He set-up Rio Ferdinand, leading him to believe that a portrait of the footballer was going to be in a football ‘Hall of Fame’. It was but he was painted draped in a Welsh flag and other Welsh iconography - not exactly what you want when you are a proud Englishman.

We managed to speak to Savage at the launch of the campaign about what it's like playing for your national team, what he thinks of England's Euro 2020 squad and whether any of the home nations are in with a chance. But first, let's get back to pranking...

ShortList: You look like you're having a lot of fun in the new Heineken campaign. What was the funniest prank you saw pulled when you were a footballer?

Robbie Savage: I remember doing one on Keith Bertschin at Birmingham. I was new to the area and that was one of my first days at the club and Keith Bertschin lived by me. I was struggling to find the way to the stadium so I phoned up Bertschy and said, ‘I’m lost. I'm stuck in this particular area and I’ve got no idea where I am, I’ve got no sat nav, how do I get to the training ground?’ He said, ‘Stay there, Sav’, I'll get you'.

15 minutes before training started he must have said to Steve Bruce, 'I've got to go and get Sav, he’s lost'. I remember I said I was about seven miles away from the training ground so he got in his car and he was on the phone to me saying, ‘where are you?’ And he said stay there I'll be there in 10 minutes. And when he got there, I was obviously at the training ground hidden away.

When he got back, I burst out laughing but he was not happy, because I made him late for training.

Bertschin was a great footballer, played for Norwich City and was part of Steve’s backroom team at Birmingham. He did love a joke and prank but he’ll never forgive me for that!

SL: Are there any surprises in Gareth Southgate’s England squad for you?

RS: No surprises. I thought Jesse Lingard on his performances towards the end of the season would have got into the 26 and is obviously left out, but it is such a strong squad. The seven players left out would have been stars in the Wales and Scotland sides, so just goes to show the strength in depth of attacking options. The big decision was, do you choose Jack Grealish or Lingard with his form towards the end of the season? I think Jack Grealish for me is a better player. But both are fantastic players.

SL: What's it like to pay for your national team? And does your mentality change when you're playing for a club versus country?

RS: My mentality didn't change, because when you cross that white line it’s a game of football. You've got to do yourself, your family, the crowd, the fans, everybody proud. So for me, it doesn't matter if I pulled on the red strip of Wales or the blue and white of Blackburn or the blue or Birmingham, the white of Derby.

When you play for your country, the only difference is how proud you are when the national anthem comes on at the beginning. Standing there with your teammates and everyone singing the anthem of your country. For me, the Welsh national anthem is the best in the world and when you hear that in front of 75,000 fans it is quite remarkable.

SL: It's brilliant to see Wales, Scotland and England in the Euros but, realistically, how do you rate their chances?

RS: Scotland have done great to get there and the recent win against Holland was fantastic - if they can get out of the group, it will be good. For Wales, the last 16 would be brilliant. I think if they do anything like they did last time, that would be a massive achievement. So I think the last 16 or quarterfinals for Wales.

If England don't get to the final, it will be a huge disappointment.

SL: Who are the five players to look out for at the Euros this year?

RS: Phil Foden, definitely. It will be great to see how he does in a major tournament. Kieffer Moore for Wales - he could have an impact if he starts or comes off the bench. Gareth Bale, obviously, and how he can impact the Wales side.

You should be looking at [Karim] Benzema, too, who is back in the France squad. He missed a penalty against Wales in the warm-ups but it will be good to see what he will do. And then you've got to look at [Romelu] Lukaku for Belgium. Belgium have got a good chance to win it with Roberto Martinez as manager.

Four of those are players everyone knows and should be good to watch - Kieffer is not as well known, but I think he could have an impact in one or two games for Wales in the Euro 2020 Championships.

And if you want to see Rio being pranked, then watch the video below.