5 things to know about Righteous Gemstones, according to Danny McBride (Exclusive)

McBride reveals all about his fantastic new comedy. 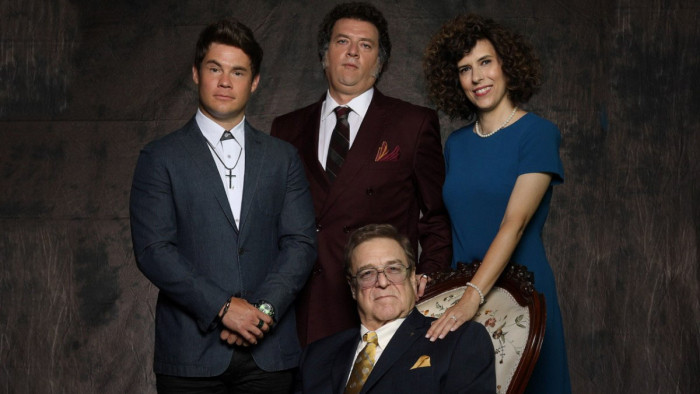 Righteous Gemstones lands on Sky Comedy this week and it’s an hilarious blast of uncomfortable laughs. It’s a show created by Danny McBride, who is no stranger to producing unlikeable yet endearing characters.

Alongside his old film-school friends, he’s responsible for the equally fantastic Eastbound and Down, and Vice Principals. But where those shows were about characters (Kenny "Fucking" Powers!) looking for bigger things, Righteous Gemstones is about a family of televangelists who are already a huge success and the trappings that come with that.

“With characters like Neil Gamby and Kenny Powers, they always imagined that they were in a massive movie and they were the lead of it,” explains McBride when we caught up with him recently. “With Gemstones, they are in that massive movie and what does that do?

“With the other two shows, those characters wanted things and that is what they were using to justify their bad behaviour. With Gemstones, it is what happens when you get the power and does that fix everything? We started from that point and it turns out you can fuck yourself just as easily.”

Righteous Gemstones is a family-focused comedy, the first one McBride has written. Much like Succession, McBride has a knack for making characters you may not like relatable - something he hopes comes across in the show.

“Once we developed the family, it was making them relatable and understandable but not justifying them. Ultimately the story isn’t about what is right or wrong - we skip over that. It’s more about a family who has had an immense loss and they aren’t sure what to do.

"It means anyone can watch it and maybe weirdly identify with who these people are, even if they aren’t on the same page with them religiously or morally.”

It’s also a show that was immediately commissioned for its second season, so to find out more here are five things you should know about Righteous Gemstones, according to Danny McBride.

These are the best NOW TV shows to watch today.

The Righteous Gemstones is on Sky Comedy and NOW TV from 5 February at 9pm. NOW TV is the exclusive home of HBO box sets and originals in the U.K.

1. It’s a show about religion but doesn’t mock it

“That was really important to me and I told that to all of the writers when we started. I don’t want it to be a cynical take on religion, to insult what people believe. I don’t even know what I believe so I would feel like an asshole trying to sit over here and make fun of someone’s beliefs. It is not up to me what people believe in or don’t."

"For me it is about characters. When I watched these pastors and they didn’t seem to understand the optics of wearing Gucci sneakers while preaching in a coliseum, there’s a disconnect there and that really interested me - I wondered what it is, whether they truly believed it or were charlatans. That opened up my eyes, I wanted to do a character in this world and figure out what they believed and whether they realise they seemed hypocritical. It was a really interesting thing to play with.”

2. It was inspired by McBride moving back South

“I moved to Charleston, South Carolina, from Los Angeles about 2.5 years ago. I had lived in LA for 20 years and it never really felt like home, it never really connected. I grew up in the South and I had two kids as they were hitting school. I just wanted to get them out of the city and go somewhere else. So we moved to Charleston and there are a lot of churches in that town. Downtown there are no buildings taller than the church steeples.

“I had been around church a lot when I was a kid but when I moved to LA it wasn’t a part of my life. So it got me thinking about church again, remembering going to it. And I just got curious about what it’s like now, betting it wasn’t the same when I was a kid. That’s when I started peeking into this world of mega churches.

“It seemed like such an obvious evolution. It is just the American way of taking something, jamming steroids into it and making it massive. It’s crazy that we would do that even with religion so the whole thing spoke to me. All the things that we have created, since Kenny Powers, it’s the idea of blowing up things. It was a ripe playground for us.”

3. Every season is a standalone story

“We have a loose goal of how many seasons we want to do with Righteous Gemstones but, at the same time, it is sort of like a season by season thing.

“I love what TV is doing now. I think it’s awesome to be able to dive into a story and tell something that is 4,5, 6 hours long - you could never do that in comedy with a movie. I love this idea of being able to tell these larger stories but the one downfall is that need to have cliffhangers and keep something on-going and never give people that payoff.

“Even how we constructed this first season of Gemstones, it is a complete story within the season. And the next season will be a complete story. There’s advantages to watching them all but, at the same time, if you tuned into this season then you will get a complete story.

“We felt that even with Vice Principals, that was only two seasons and we shot it all at once. There was something about seeing the finish line that made it make so much more sense. And it helped the actors so much more with where they needed to land. I like things to be complete and I don’t like to leave loose ends.”

4. McBride wrote every part for himself (even John Goodman’s)

“One thing I do when I write these shows is that I am always very conscious of the old style of comedy in the 90s. Where there was one funny person in the movie and everyone else stands around waiting for them to deliver punchlines.

“I don’t want that. I really love when there is chemistry and dynamic in the characters, the more funny people the better. So the way I make sure each character is serviced is that I imagine myself playing all the roles and make sure that I would want to deliver these lines as much as another actor would.

“I never write it thinking I am stacking the deck for my guy, I don’t approach it that way.”

5. Gemstones could be the end of a TV trilogy

"I’m working with Jody Hill and David Green, who I have known since film school and we have never set rules on anything that we have done together. There is never an anticipation when something is written that we are going to do it exactly the same as the last time, it always just happens naturally. That is the key to our collaborations, there’s no pressure on anyone.

"We genuinely enjoy being around each other and working together. The TV shows have just been a way that no matter what else we are working on, there is this opportunity where we get to join forces for a few months and push each other, make each other laugh.

“But when we set up Gemstones we looked at it being maybe an end of a trilogy of this sort of collaboration. We were saying that even before Gemstones was created.

"Who knows. I am not saying we won’t do another but we aren’t putting any strict rules on it.”