The stand-up has spoken to Presidents and rock stars 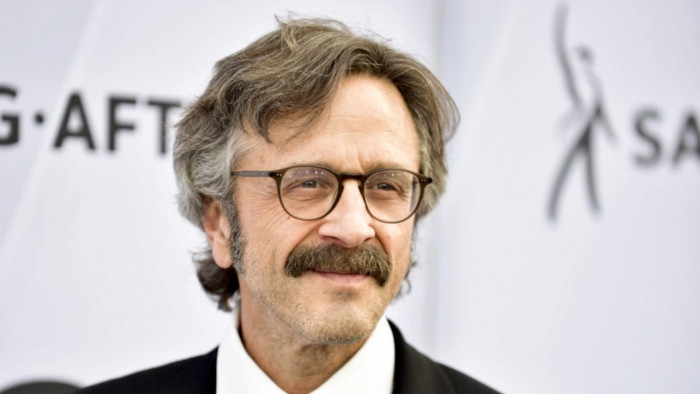 There are an awful lot of podcasts out there, and a lot of them can charitably be described as “a bit like WTF with Marc Maron but not as good”. He started his back in the day when nobody but the most tech-savvy really knew what podcasts even really were, and odds are his voice was the first exposure to the medium for a hell of a lot of people. The runaway success of his twice-weekly show has seen guests as huge as Barack Obama pop by his garage for a chat.

Ahead of his stand-up show in London’s Royal Festival Hall next week (tickets here), we rang Maron up in his den in Los Angeles to find out the difference between talking to one person and a room full of them, the difference between a conversationalist and a journalist, and why he doesn’t regret the questions he didn’t ask.

Hi Marc! How do you interview the people that come on your podcast?

I always try to start as casually as possible, so whether they want to hear it or not, I talk about myself. Sometimes before we even get on the microphones, we’re walking through my house and I’ll tell them what’s on my mind, or tell them about the house, or whatever. A lot of people, knowing they’re going to being interviewed, are really thinking about it, and if you enter into it as having your own problems, that casual chit chat can get people over the fear of talking about themselves. That can help a lot.

So you kind of blur the lines between an interview and a chat?

It’s a matter of easing into it and sacrificing the idea of “this is what I need to know by the end of this”. I’m doing interviews in an audio format - all the things you’re going to feel listening to that interview might not be about information per se, they’re about engagement. If people are caught up with what they want to ask and what they want to know, they can get detached from what’s happening in the present, because they want to get at something else. But if you let things unfold, and talk about nothing, that often leads to the bigger thing, and I’m like “Well, I didn’t need to talk about that, it just happened”. We just have a conversation. And the thing is, I’m not a journalist. I’m not being sent out on assignment to find things out. I can get loose with it and see what’s revealed.

Do you have an agenda or bullet points or anything?

I usually make a messy one-sheet of notes that looks like a bunch of scribbles. It looks like a page out of a schizophrenic’s diary. I’ll go through people’s information, write little bullet points here and there, but it’s a big mess on the page. It looks like my brain. Like there are certain things that interest me or areas I want to talk about, but by writing it down in a scattered way I kind of programme my brain. I can look down during the interview and see what I’ve got there, but it’s more about writing down what interests me to get my brain in the right place. But a lot of the time it just comes up naturally, and I’ll look down at my scattered sheet of notes and think “Well, we’ve covered that”.

Is it very different interviewing people you already know a lot about rather than people you’re maybe more casually aware of?

I respect a lot of people and i can understand why they’re great, but when I’m a real fan I can get a little excitable. Hearing me talk to Keith Richards, it’s clearly a fan interview, and when I’m talking to Bruce Springsteen, that’s a respect interview. Most people become human pretty quickly when you meet them - across from Keith Richards, I can see his skin, and his wrinkles. But he’s still Keith Richards! He’s not mortal to me. That does make it a different interview. People I know personally, my peers, I have a shorthand with. I know what they’re capable of, and how candid they’ll be, and I know I can engage with them very quickly, and because I’m not worried about that it’ll be a looser, crazier interview. I know some people will give me a rough time, and I can enjoy that and get that going. If i don’t know that we’ll engage right away, or at all, I need to stay in the saddle a bit more and ride the conversation until it gives.

Do you listen back to your interviews?

Not usually. Once I’ve had the talk I hand it over to the producer. Most of my memories of them - which are getting harder and harder to access - are of the actual conversation. Sometimes I’ll listen back, but by and large, no.

So you don’t have the thing of going “Oh no, why didn’t I ask what they meant by that?” or whatever?

It happens. There are times when i’m like “Damn it, how did I not ask about that?”. But I only know what I know, and I’m only going to do so much research, and for me the charm of the show is the actual conversation and the feeling that it’s happening in the moment, as opposed to information being conveyed. With most famous people if you want information about them, you can find it, but I’d rather have a a real, candid conversation. I’d get mad if it was a tremendous oversight. Like if I had the guy the cured cancer on and never mentioned cancer or curing it, I’d be mad, but generally I don’t get too hung up. Most of the time, if I didn’t ask something, it’s because I never thought to, so I’m not going to regret it.

You talk with people on your podcast, and talk to people doing standup, but your persona seems pretty consistent. Do you need to be in different mindsets for them?

I think the years of doing standup have become a kind of ongoing conversation with the audience - certain areas keep coming up because they’re fundamentals in my life. But there’s a whole different skill set to presenting comedy. The dynamic you have with an audience, having the confidence that the laughs will be where you need them to be… It’s a heightened environment that over the years I’ve managed to make comfortable for me. One of my goals as a standup is not to have this artifice that feels like “a big show”, which is a habit comics can get into. When I go out I know pretty well what I’m going to say but I like to leave room for things to happen. It’s an entirely different skill set in an entirely different context, requiring a different mindset and intention, but there are similarities - I’m trying to make this performance to hundreds or thousands of people feel like it’s just me talking with them, candidly, in a way it’s taken me 30 years to get to.

You’re 55, and have had a really successful last decade or so. Did getting to this level when a bit older mean it treated you differently than if it had come earlier?

Yeah, it’s hard for me to speculate as it was never on the cards. When I was younger I was a lot more angry and less grounded, both in my craft and in my heart. I don’t know that I could have done the job I thought I deserved then. In retrospect I had a lot of opportunities that didn’t pan out - I didn’t necessarily screw them up, they just didn’t pan out, and I don’t know that I would have been able to handle them if they had. It took me a long time to understand my limitations and my skill set and be comfortable in myself, and a lot of that has to do with letting go of certain dreams that weren’t working out. I started doing this little thing in my garage just to stay busy, and it turned out my timing was right, and it just kind of worked out. I’ve let a lot go, which gives me a lot of freedom in y heart and my mind. What success does come, which is very manageable, I can handle.

Why should everyone go and see you at Royal Festival Hall on April 6th?

If you know me and want to hang out and have a nice night, come by. I’ll talk for a while and be entertaining and funny. If you don’t know me, I’m doing the best comedy I’ve ever done in my life, after 30 years of doing it. I talk about a lot of things that are relevant, both personally and globally. It’s provocative, it’s exciting, it’s funny and I’m excited to do it. The last time I was at Royal Festival Hall I did really well. It’s a really good venue that’s acoustically perfect, and it’s fascinating being one man standing on a stage in front of a giant pipe organ in a room built to accommodate a much bigger event. That’s truly exciting.