The actor channels his on-screen character 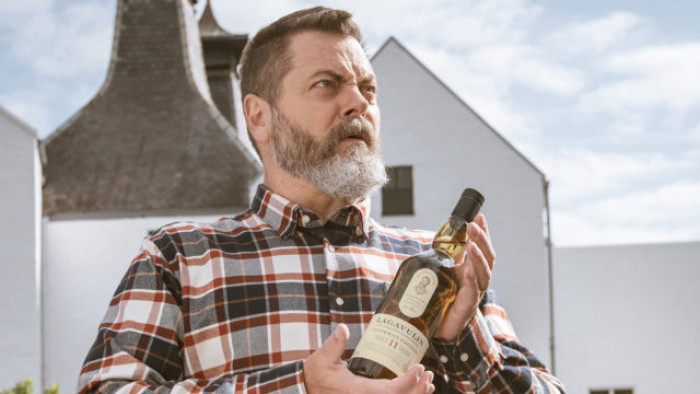 If you’re a fan of Parks and Recreation, you’re sure to know that Ron Swanson (played by Nick Offerman) is the ultimate man’s man; someone who loves nothing more than a bit of woodworking, a spot of hunting and a dram of whisky.

Now, you’ll be pleased to hear, the actor is set to to channel his on-screen alter-ego by launching a brand new whisky into the world.

Yes, Swanson would be proud.

Partnering with whisky brand Lagavulin - owned by drinks giant Diageo - Offerman has unveiled a limited-edition offering that is sure to delight the taste buds.

The 11-year-old whisky, appropriately named The Lagavulin Offerman Edition Aged 11, is said to have Lagavulin’s signature smoky flavour, alongside a peatiness and hints of sweet berry and orchard fruits.

“I have spent countless hours parsing the alchemy for a new, limited-edition whisky with Lagavulin Distillery Manager Colin Gordon. Together, we have concocted a most edifying nectar – Lagavulin Offerman Edition Aged 11 Years,” noted Offerman of the new release.

“‘Carrying the signature Lagavulin Islay Single Malt peatiness with sweet berry and orchard fruit notes, this Scotch Whisky is for those who adore Lagavulin’s patented smoky flavour and the patience required to masterfully distill a Single Malt’ is what they told me to say, but I would rather just tell you that I am giggling with delight at the notion of people enjoying this limited-edition Scotch.”

The collaboration with the brand first began back in 2014 when Offerman’s on-screen character developed a penchant for the spirit, leading the actor to become something of a spokesperson for the Scotch single malt brand in the My Tales of Whisky series.

After all, how could we possibly forget that delightful Yule Log video?

And now, you too can get your hands on a Ron Swanson-approved whisky for a price that is anything but laughable.

Retailing for $74.99, the limited-edition US release is set to launch any day now - so ensure you pop your email into Flaviar to receive a notification when the bottles go on sale.

In the mood for some more Whisky? Discover our pick of the best whiskey.