There's a new iPad Air but how is it different from an old iPad? 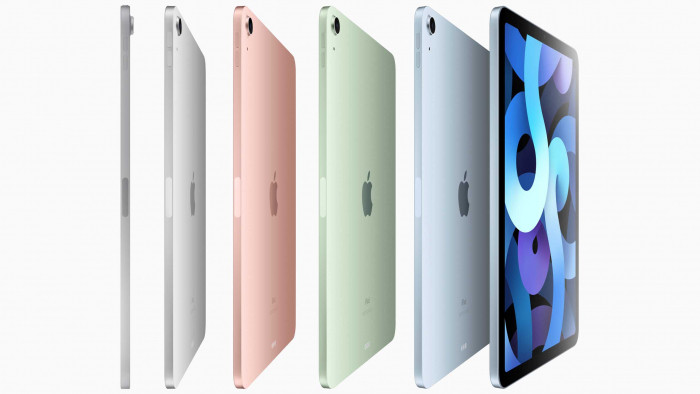 Apple has revealed two new iPads at its Time Flies event - the new iPad Air 2020 and the eight generation of the plain-old iPad.

The new iPad Air 2020 shouldn't be confused with the iPad Pro but, blimey, it sure looks like one.

It does come in a number of funky colours, though, which we won't spoil what they are right now as that'll be one of our, drum roll, 5 things to know about the Apple iPad Air 2020...

1. The new iPad Air is the middle child of the iPad family

This is the fourth generation of the iPad Air and it currently sits right in the middle of the iPad family, nestled between the more affordable iPad and the more expensive iPad Pro.

The new iPad Air has got a 10.9-inch screen and it stretches across the chassis - it's not quite the size as the iPad Pro (11 inches) but it's Liquid Retina display (3.8 million pixels, don't you know) and it has an anti-reflective coating to stop you frowning when viewing stuff in the sun.

Interestingly, the Touch ID sensor is no longer on the screen but on the side button and this one is compatible with the second gen Apple Pencil so if you want your iPad experience to come with a fancy stylus (sold separately) then you are in luck.

3. The new iPad Air is packing power under its bonnet

The new iPad Air 2020 has been equipped with an A14 Bionic chip which makes it the most advanced iPad when it comes to sheer power. The reason it has this is so you can do cool tasks like edit 4K videos. It also improvs graphics by 30 per cent and can make calculations 10x faster. But that's all a bit dull - essentially you can use it like a computer and it won't buckle under the strain.

Another change is that the new iPad Air now features a USB-C port which means that you are more likely to have one of these cords hanging around, if you've already got a MacBook Air or any other phone that uses this connectivity. Couple this with a 12MP camera that you absolutely should only use in the comfort of your home as you will be mocked wildly if you try and film anything with an iPad in a crowded space, and what you have is a very capable machine.

Whoop, iOS 14 from the off offers better Apple Pencil support (including bringing Scribble to iPad, allowing Apple Pencil users to handwrite directly in any text field), universal search and FaceTime and the like won't take over the entirety of your device when you get an incoming call.

The new iPad Air comes complete with a new thin and light design, so why not celebrate this fact with some funky colouring? Well, that's exactly what it's done offering it in five finishes: silver, space gray, rose gold, green, and sky blue.

For our money, we like the blue and green option - it's nice that they aren't just offering it in space gray and rose gold.