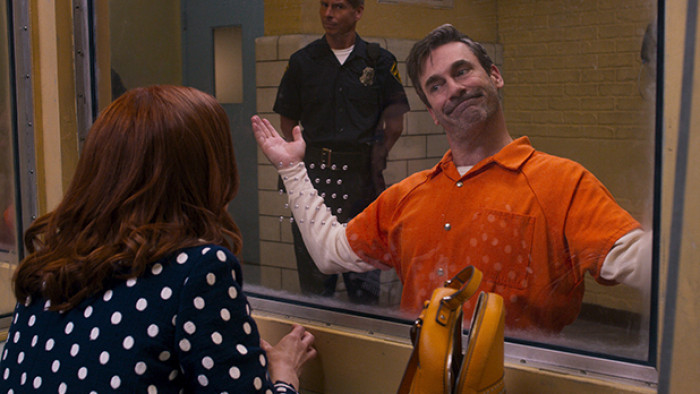 For many, the concept of interactive movies should begin and end with Black Mirror: Bandersnatch. Netflix, however, seems to disagree, as the streaming service has unveiled a teaser for the forthcoming Kimmy Schmidt interactive movie.

Entitled ‘Unbreakable Kimmy Schmidt: Kimmy Vs. The Reverend’, the just-released teaser trailer sees some of the show’s best love cast members reprise their roles for the special.

Set to hit the steaming platform on 12 May, the cast of regulars - including the notorious Reverend played by Jon Hamm - are set to be joined by the likes of Daniel Radcliffe, Amy Sedaris, Fred Armisen, Johnny Knoxville and Michael Carlsen to name but a few.

Now, that’s what I call an eclectic cast list.

Take it 10 seconds at a time 'til I'm back on May 12th! Fudge yeah! Did I mention you get to decide how the story ends?

Following on from four series of the hit Netflix show, Kimmy once again sets up for a showdown with the reverend, who needs to be stopped in order for her to get to her own wedding.

For those unfamiliar with the original storyline, the show revolves around Kimmy Schmidt, a somewhat naive and energetic girl who escapes a doomsday-inspired cult run by a Reverend (Hamm) after 15 years in captivity.

A series with undoubtedly one of the catchiest (or most annoying depending on your position) theme songs on Netflix, the original Unbreakable Kimmy Schmidt began life in 2015 and was written by formidable duo Tina Fey and Robert Carlock.

However, despite dodging the so-called three season Netflix curse, the show was cancelled after its fourth brilliant, yet downright strange series in January 2019.

Now, one year on, the show appears to be set for bigger things, courtesy of a hefty Netflix budget and a host of multiple endings.

As for whether the choose-your-own-adventure format will be as well received as it was with its Black Mirror counterpart? Only time will tell.