The storage is designed to last for centuries. 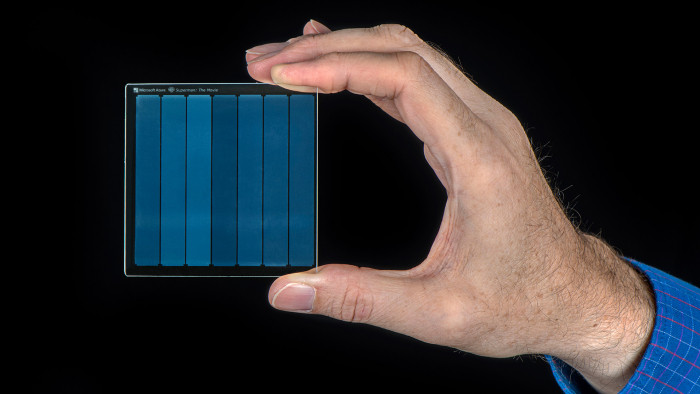 That small glass disc may not look too impressive or high-tech. But, in fact, it could be a way of storing data for hundreds of years.

Storage is often a problem for film and TV studios – normally done on celluloid, that option isn't exactly foolproof. For one, it's flammable. And secondly, it doesn't last – it can very easily warp and decay, meaning archival footage is at risk of being lost forever.

But the glass Project Silica disc, brought to the world by Microsoft, may be a solution. It's designed to store data that isn't accessed regularly, making it perfect for archival footage that only needs to be removed for remastering. It's also tiny (7.5cm x 7.5cm x 2mm) and isn't prone to decay, all the better for storage.

The first film to be stored on the disc is a copy of the 1978 Superman, though more films will soon follow.

It's also incredibly hardy. "We baked it in very, very hot ovens," Rowstron explained, as well as "submerging the glass in boiling water, microwaving it and scratching it with steel wool" – and even then, the data stayed safe. You could smash it with a hammer, if you really insisted – but it seems unlikely that anything else would affect its storage capability.

At the moment, space isn't huge – it only holds around 75GB of data. But the company says it will be creating discs with higher data capacity soon. It's early days – but Rowstron may not be wrong when he confidently claimed that the future is glass.