5 things to know about Le Mans '66, according to Matt Damon and Christian Bale

We speak to the stars of the Oscar nominated car epic... 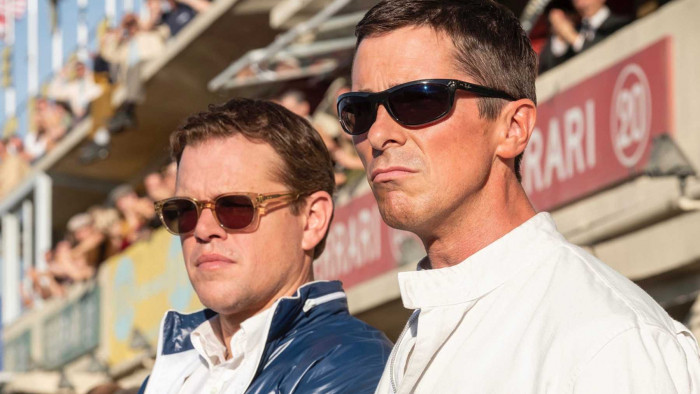 Le Mans '66 was one of the surprise successes last year. It was a surprise because it was one of the rare non-franchise films that managed to bring in brilliant box office, while not setting up a superhero sequel.

It's a great movie that features heart-thumping race scenes and a lovely power play between the corporate suits and the drivers and mechanics of the cars hoping to bring both Ford and Ferrari glory at one of the hardest races on earth, the 24 hour Le Mans championship.

Directed by James Mangold, whose stock has risen recently after rumours he is to direct the next Indiana Jones movie, Le Mans '66 follows the real-life tale of two characters, Ken Miles (Christian Bale) and Carroll Shelby (Matt Damond) who helped Ford try and attain an impossible dream, winning Le Mans - a race that had been dominated by the coolness of Italian car maker Ferrari.

We spoke to Mangold last year and he said he couldn't see anyone else but Damon and Bale in these roles - watch the movie and you will agree.

We caught up with Bale and Damon and they gave us 5 things to know about Le Mans '66, including Bales' admittance that, despite ace-ing the 'real' racing scenes, he'd rather leave the cars to the pros...

Le Mans ’66 is available to own on DVD and Blu-ray now.

Le Mans '66
£14.99
Le Mans '66 is the true tale of racing driver Ken Miles, who went from relative obscurity to being one of the main drivers for Ford during their bid to win Le Mans.
Buy on Amazon now

1. Hollywood had been trying to make the movie for a decade

Matt Damon: “There had been different iterations of this [project] around for about 10 years, so I was familiar with the story. But it wasn’t until I read this version, with this group of people, like Jim [Mangold] and Christian, attached that I got really sold. So, then I really started to watch documentaries about Shelby and reading about him. I also talked to a lot of people because a lot of people knew him socially – he cut quite a figure out here in LA! And put it this way: he was described to me, by many people, as a man who could sell you anything.”

2. Some of the real-life race drivers were played by their sons

Matt Damon: “A lot of [the sons] were hanging out in the pits. I think that for them making this was definitely a period where they were having a very special time, commiserating with their dads, being with them again in that way, you know? Just to get do that… I mean, I lost my dad 18 months ago and I can’t imagine… To get to suit up and play your dad in a movie… It seemed like those guys were really appreciating that. Appreciating having the chance to do that. It was very special to watch.”

3. Bale would rather leave the driving to the professionals

Christian Bale: “Every day on set, I would say quietly to myself, ‘You’ve got nothing to prove to them. Don’t try and keep up. Don’t ever do it. It will never happen. You are here to pretend to know what you’re doing… And, just to be clear, you really don’t know what you’re doing!’ I had a lot of fun, but did I ever feel like I was ever anything more than an absolute beginner? No.
"I loved it to bits. It’s addictive out there. But to take it to their level is not something I’m going to kid myself that I can do. That would end in disaster! And they were twitchy as hell, you know, these cars, these toys that they built. You come around a bend and all of a sudden you are, as they say it, joining the 180 degrees club [spinning out]."

Christian Bale: “In my amateur assessment Ken is sort of reaching for the truth. The truth about himself. The dynamic and the very raw, mechanical man and machine – this purity that was in his life. It was both his Achilles heel and his saving grace.

"It’s what made him, what made him so absolutely brilliant, but also what made people nervous of him, and generally stopped people from hiring him. Ken was always losing out to younger, better-looking men, but spent his career looking at all these guys in his rear-view mirror in the actual races. That [the importance of image and towing the corporate line] is all very much still in play today – in that juggernaut of business. Even more so now. It’s a massive industry, and they need to sell.

Matt Damon: “I wasn’t interested in motor-racing movies. That’s not why I did this. I think this story is so relatable. It’s about these underdogs who did this thing together, this incredible thing, despite being very different people and having this very colourful relationship and friendship. They came together and achieved the impossible. I have always loved movies like that and when I read it, this one just jumped off the page – that’s why we did it.”