Konami joins the retro party with the TurboGrafx-16 mini 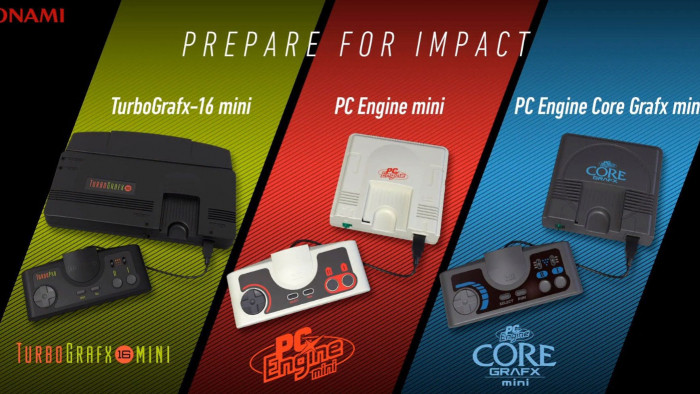 Konami has clearly seen the huge piles of cash that Sony and Nintendo printed via their dinky retro consoles and has decided it too wants a big old slice of that pie.

Fortunately, since acquiring Hudson in 2005, it has a console it can do that with.

Say hello to the TurboGrafx-16 mini. Actually, you might know it as the PC Engine mini, or the PC Engine Core Grafx mini depending on where in the world you’re reading this.

Originally a joint project between NEC and Hudson, the TurboGrafx-16 first emerged in Japan in 1987, before hitting the US in 1989 and finally the UK in 1990. If it seems like an unlikely console to reboot, then you probably live in one of the latter two territories, where it struggled to make an impact. In Japan, however, it was more of a success, at one time beating both Sony and Nintendo.

Things started brightly in America, but it eventually lost ground to Sega and Nintendo as the software dried up, but that’s where ‘mini’ consoles come into their own: they don’t need an enormous library, just a handful of stone-cold classics. And the Turbgrafx-16 mini is off to a solid start in that respect, with six of the console’s best retro games confirmed for Europe and North America: R-Type, Ys Book I & II, New Adventure Island, Ninja Spirit, Alien Crush and Dungeon Explorer.

Japan gets a different list of games, with Bonk’s Adventure, Dracula X, The Kung Fu/China Warrior and Super Star Soldier coming in, and only Ys I & II and Dungeon Explorer being retained from the western collection.

It’s worth noting that two of those games – Ys and Dracula X – came on a CD-ROM, opening up the TurboGrafx-CD’s library of titles.

That’s all we have for now though, with no release date or pricing forthcoming. Hopefully we won’t have too long to wait and the TurboGrafx-16 mini will proudly sit on our best retro games consoles list soon.