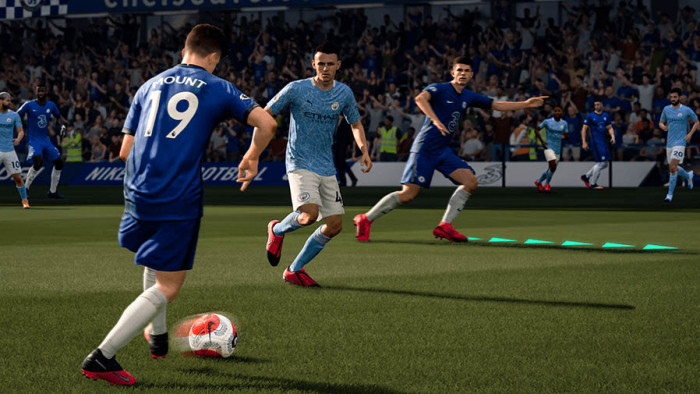 Football has been in the doldrums recently. Lockdown has meant that games are played behind closed doors, with fans watching at home. One of the ways the games have come alive - apart from Mourinho’s sideline tantrums - has been thanks to the ‘crowd noise’. This was taken from the same technology EA Sports uses for FIFA and is a lovely nod to a game that, for years now, has emulated what's going on pitch side.

In these trying times, a new FIFA game released to the world is the comfort we all need right now. That’s because, if you are a fan, you know what you are getting with FIFA - a game a year means that EA Sports never really rewrites the rulebook and there’s a comfort to that.

Like any decent footballer, EA Sports makes incremental improvements to its FIFA skillset - refinements that are subtle but do make a difference.

FIFA 21 is no different, here’s 5 things you need to know…

We were expecting VAR to play an integral part of FIFA 21 but it’s thankfully been excised for this version of the game. While it would have been intriguing to see how the goal-line technology would have been used, there’s plenty of ways to dispute a goal by using the myriad camera playbacks that are available throughout the game in the menu options. While these won’t stop the goals being ruled out, it means you can still dispute them happily with whoever you are playing with.

2 This is a far more relaxed game

After our third 4-3 win in a row, it dawned on us that FIFA 21 is a game that’s packed with goals and action. We rarely had a game that didn’t have a slick trick, with the new Creative Runs feature kicking into action, we often found us in front of goal against a keeper that can finally be chipped. The controls feel less fiddly, dribbling certainly seems to have improved, thanks to EA adding Agile Dribbling to proceedings and our crosses finally hit our man, rather than going nowhere. All of these feel like refinements from FIFA 2020 and are very welcomed.

3 It’s all about the attack

It might be that we are dreadful at defending, or just want to head straight to goal whenever we get the ball but FIFA 21 feels like a game that is constantly on the attack. And even when you are defending there’s a new Team Press option that pushes the whole of your team to try and get the ball from your opponent. More attacking, for us, also meant more goals and that is definitely not a bad thing. The referees seemed to turn more a blind eye to our wistful slide tackles, too. Where we might have seen red a few times before, there’s more heft to the challenges you can make to the opposition.

Ultimate Team is the centrepiece for any FIFA game and we welcome the new co-op mode, but the push for microtransactions throughout did put us off. We know that you get through FUT without spending a penny but there’s temptations galore throughout this part of the game. It’s great to Eric Cantona enter the FUT 100, though.

The changes that have been made to FUT are impressive, however, especially the fact that all your players start off with 10 fitness.

Career mode was fun, with the introduction of a Football Manager style 2D view of the games you are masterminding and flipping from this into the game is brilliant fun.

Volta, FIFA’s 5-aside street football game within the FIFA 21 game was fun but didn’t have the staying power as the main modes.

5 FIFA 21 straddles the next gen

While this isn’t the next-gen FIFA game we have been waiting for, it’s a fantastic go-between. If you buy it on PS4 then if/when you get your PS5 you will get a free upgrade to the PS5 version of the game, and the same goes for Xbox. This ‘dual entitlement’ is a really nice way to keep both gaming parties happy. EA says the next-gen version of FIFA 21 will offer “blazing fast load times, deferred lighting and rendering, enhanced animation technology, off-ball humanisation”.

If this is a now-gen swan song for FIFA, then it’s a good one. The game has never been more playable, the goals never so plentiful. FIFA 21 brings the fun back to football sims, and quite co-incidentally apes the rather large scores we are currently getting in lockdown Premier League football, thankfully without all that VAR nonsense.

If you are looking for a complete FIFA overhaul, then this isn’t for you - we suspect that is set to come in the next year (and gen).