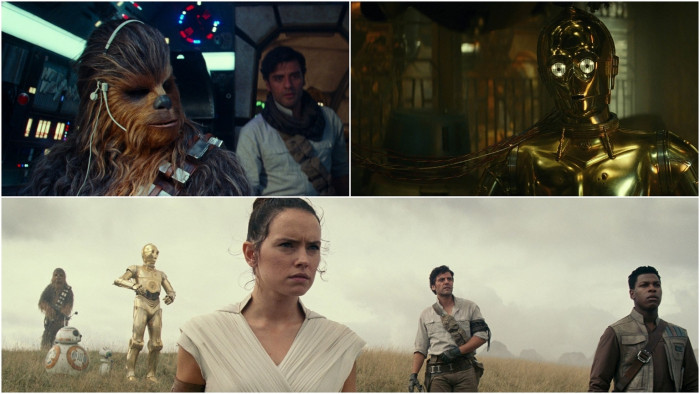 The final instalment of the Skywalker saga has finally arrived in cinemas to conclude an over 40 year tale of hope and heroism in a galaxy far, far away.

Anthony Daniels is one of the longest-serving stars of the Star Wars series, as the pessimistic humanoid droid C-3PO, but he gets to shine in The Rise of Skywalker like never before.
He’s joined by newish-comer Joonas Suotamo, who took over the role of everyone’s favourite Wookie, Chewbacca, following original Chewie Peter Mayhew’s retirement after The Force Awakens.
The pair go through quite an emotional rollercoaster in the movie, but they were in good spirits when they sat down with Shortlist to talk about the film, their favourite Star Wars moments and answer some quickfire questions.

What is your favourite scene in the The Rise of Skywalker?

Anthony Daniels (C3P0): I think my favourite scenes, unfortunately 3PO was in quite a few, but to be out in Jordan in the desert planet of Pasaana was really going back to Ralph McQuarrie’s original concept painting of how that world should look and my soul really moved when I saw these big cliff faces and so. Then we had this huge scene - in Star Wars there's always a huge scene - but we had all these creatures there it was just beautiful.
Joonas Suotamo (Chewbacca): I think my favourite scene is the five minute segment in the film where everything just condenses into a cinema experience unlike no other I’ve ever experienced. I won't say which scene that is but people will know.

What’s the most emotional scene in the Star Wars franchise for you to watch?

Anthony: Well actually in this film, I think the love of the characters for each other and particularly 3PO when he does something particular in here. “Taking one last look at my friends,” because we are and I was emotional doing it on set it was really sad so I made myself sad.
Joonas: Watching that performance, you do these little things, just at the right moments, and it was perfect, perfect delivery. You [also] get too many laughs in this film I wish I had more.
Anthony: It was refreshing and I am so thrilled that they came up with a script that gave 3PO a sort of value, because he's been kind of undervalued for a few years now. And it brought out new qualities within him. Because he has been bullied and put down over the years. So this time, he had a kind of use.

What's your favourite line from the whole saga?

Anthony: Yes, that was a good one. Mine is “We’re doomed”. That really sums up 3PO’s view on life!

If you could go on a space adventure with anyone in the whole of Star Wars, who would you go with?

Anthony: It's not going to be Darth Vader because he's irritating and his voice, you know, the breathing? You know he snores dreadfully whilst he’s awake actually.
Joonas: He’s a terrible roommate I’ve heard.
Anthony: Jabba’s out too because he's really gross.
Joonas: If you’re going on a space adventure I would need someone who knows languages. So 3PO, even though he does like to talk, still, he's indispensable.
Anthony: Very good idea. I give good advice.

What Star Wars character would you love to play?

Anthony: Any character with a costume that you can sit down in.
Joonas: I'd want to sit down and be part of the Jedi Council. As a wise Jedi. You just sit there and look cool. No requirements.
Anthony: Yeah and you nod a bit. And people come and do your makeup, or your prosthetic or whatever. I don't even want a lightsaber I just want to look wise.
Joonas: I think we both just want some respect! No just kidding. Yeah, General Counsel would be great.

Would you want to do a spinoff series and if so, what would happen?

Anthony: 3PO would have a costume that was easy to sit down in! I suppose exploring other galaxies a bit a bit like that other film Star something that we don’t talk about… but for now, the end of the Skywalker story, they'll find other things to do.

Have you thought about doing a Doctor Aphra series where you could play bad versions of characters who look like your own?

Joonas: We need this! This will give us the street cred we’ve been looking for.
Anthony: Enough of the nice guys! I love it, I hadn’t realised the other side.

So finally what is your favourite Star Wars movies from the whole saga?

Anthony: Well, curiously, Episode IV, the original, because it was kind of innocent, fun, it wasn't too complicated. A few Jedis, there was only one kind of lightsaber, one or two, but now there seemed to be rainbow coloured lightsabers everywhere so I lose track of who's who. What’s your favourite?
Joonas: The Rise of Skywalker. We have just made a movie!
Anthony: He’s a company man!
Joonas: My second favourite is Solo or The Empire Strikes Back. I love my Lando.
Star Wars: The Rise of Skywalker is in cinemas now.