Doom: Eternal: 10 things you need to know about the latest Doom 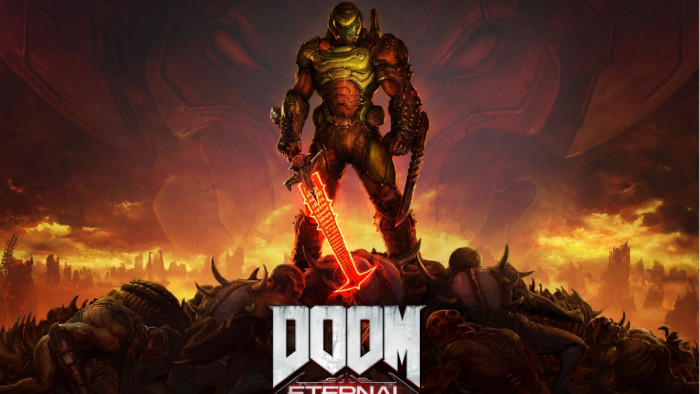 We learnt there's a knack to flamethrowing demons from hell this week, thanks to Doom: Eternal.

Shortlist has spent time with Doom: Eternal - the latest in the iconic shooter series that effectively launched the FPS genre as we know it.

Once again, we will take up the mantle of the Doom Slayer to battle demons who are rising up from the depths of hell and stop them from taking over the Earth… but there are some important changes that have been made to the beloved shooter series we were first introduced to way back in 1993.

Here are ten things you need to know about the hotly-anticipated next game in the 10 million-copy selling, genre-defining franchise…

‘Doom: Eternal’ is set two years after the events of 2016’s ‘Doom’, which was a reboot of the original FPS series. Once again, you’re the Doom Slayer, but now you are on a mission to fight demonic forces that have made their way to the surface of the planet and overrun Earth. Yikes.

2. You only need to know three things to get to grips with Doom: Eternal

Right, we know this is a list of ten. But there are just three important mechanics you need to know to get to grips with this game - a simple set of instructions that the entire gameplay of Doom: Eternal is based on. Killing enemies in specific ways is your resource system. This means that you don't mindlessly bash through the undead horde - you make decisions about how to take them down, and the resource that will give you. It adds a refreshing new element to playing not just Doom, but the genre as a whole.It’s fitting that the franchise that defined what a first person shooter is, is continuing to give us new ways to play them.

3. Chainsawing demons will reward you with you ammo

Using your chainsaw weapon in close-up combat to carve demons in half is not only the most satisfying slicing you’ll see this side of a Parma ham, that good-for-nothing baddie becomes good-for-something, dropping a tasty ammo package. This idea was introduced in 2016’s ‘Doom’ and has been improved further for this sequel: instead of cycling through your weaponry, your chainsaw is now easily used with the tap of one specific button. Buzzing.

4. Using a flamethrower gives you armour

Likewise, when you burn baddies, they’ll drop armour for your trouble. Plus, setting them aflame is loads of fun.

5. Glory Kills are as gross as they are great

If you thought grabbing a flamethrower and making like Leo DiCaprio in Once Upon A Time In Hollywood was fun, you ain’t seen nothing yet. Doom: Eternal’s Glory Kills are about as satisfying as slaying gets. Attack an enemy until they’re on their last legs and they’ll stagger around, wounded and helpless. This is when you get ‘em, good. Get up close and perform a ‘Glory Kill’ melee attack on them that annihilates them in a grotesque and amusing fashion, and then reap your disgustingly earned armour rewards.

The demons of Doom: Eternal may be pleasingly cartoonish in their design, but that doesn’t mean they’re easy to fight. They’re punishing, and you will die all the damn time. This, we’re unashamed to tell you, we can tell you with a first-hand experience. Some players may find this frustrating but, thankfully, respawn times are nice and speedy.

7. Which is to say, there is a learning curve

The learning curve is steep, but you’ll be rewarded for sticking with it. There are more than thirty types of hell-risen bad guy in this game, and understanding which ones to take down, in which order, and using which of your resources makes all the difference in clearing a battlefield.

8. Strategy comes into the game more than you might expect for an FPS

You’ll have to get to know some grizzly characters in Doom: Eternal – and knowing them is half the battle. It’s not just about mindlessly bashing through the horde. How they move, their weak spots and who you’ll need to take out of the battle first is key to getting past a particular bit of the game. Think of it like a combat chess match: each demon, and attack, has its own specific role on the battlefield. It’s not just about charging in, head-on, to the horde like a hell-raising Leeroy Jenkins. No matter how many times we tried, that approach didn't end well.

9. This is not a game that takes itself seriously

There's no navel-gazing seriousness to Doom: Eternal, unusual for a FPS. Forget the gritty realism and brace yourself for kitsch, silly, revolting monsters and horrendous, hellish, completely over-the-top ways of killing them. Fun’s truly in the crosshairs of this sequel, too: the developers have addressed elements that made its predecessor feel monotonous at times, chucked out the filler, and made this one feel a whole lot more pacy and fresh.

10. You’re going to get up close and personal with these beasties

It’s refreshing to get our hands on a shooter that isn’t a cover shooter - though there are more weapons in this than the last game, and you’ll get your mitts on a variety of souped-up long-range guns, Doom: Eternal is really about push-forward combat, encouraging you to get stuck into the action by performing close-quarters, melee-style finishing moves on your foes. And having hell’s army up in your grill at any given time may be gruesome - but it’s as exciting as hell, too.

Doom: Eternal
£49.99
Doom is back in the biggest and goriest version of the game so far - it's available on PS4, Xbox One, Switch and PC.
Buy Doom: Eternal from Amazon