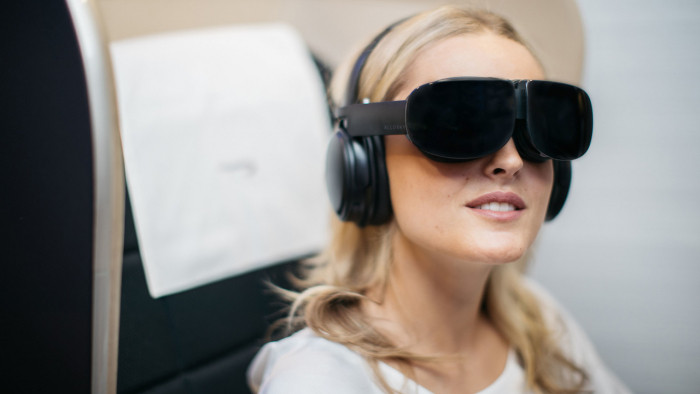 In-flight entertainment systems can be something of a blessing for anxious flyers. So imagine arriving at your seat to find a fully-immersive virtual reality headset waiting to distract you from the toddler who’s currently scaling the seat in front of you. Sounds good? Well you’re in luck, because British Airways are trialling just that in the form of their new ‘AlloSky’ headsets.

In a UK first that coincides with the airline’s centenary, British Airways is set to introduce the new 'AlloSky' VR headsets from SkyLights onboard selected international flights.

Initially appearing onboard flights between London Heathrow and New York JFK until the end of 2019, the headsets mark the UK airline industry’s first tentative steps into the immersive world of VR entertainment.

The bad news? You’ve got to wangle yourself an upgrade to first class in order to try it.

Offering a selection of films and TV programmes in 2D, 3D and 360 degree formats, the headsets also allow 3D viewing from a reclining position - aka those nifty lie-flat beds that come with the upgrade you’ve just blagged.

“Virtual reality has the power to revolutionise in-flight entertainment,” notes Sajida Ismail, Head of Inflight Product at British Airways. “We’re really excited to trial these new glasses as they should create a unique and memorable journey for our First customers”.

The airline has also announced been working with a host of experts to curate a selection of therapeutic programmes for the anxious flyers among us, including immersive guided meditation sessions and sound therapy to help ease your nerves.

SkyLights has been something of a long-term investment for British Airways’ parent company IAG, who nurtured the company as part of its Hangar 51 start-up accelerator programme.

Having trialled the VR technology at Heathrow Terminal 5 earlier this year by giving customers a glimpse into their new Club World cabin, the only way is up for this technology.