We're just going to go ahead and say it: being cold is actually bad 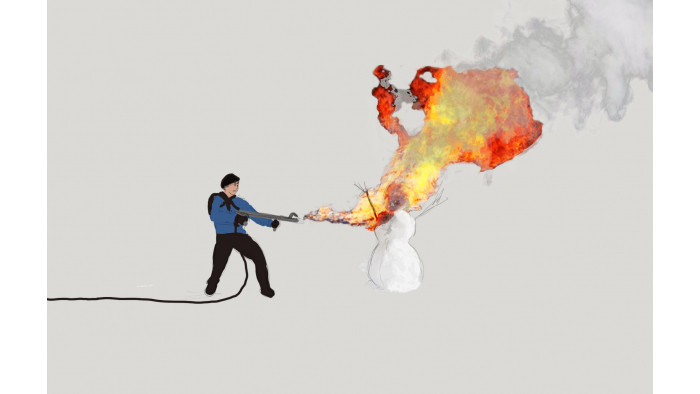 Someone’s gotta do it. Someone’s got to put the cold on blast, and it looks like that person is going to have to be me.

Do my paymasters at ShortList Media keep my head just above penury for me to sit on the fence about the burning issues of the day? No, siree. How will the people know what to think if no-one points them in the right direction by risking opprobrium with challenging discourse and controversial thought? Simple answer: they won’t. You would die without me.

So I’m just gonna come out and say it: being cold sucks. It’s some of the worst shit going, and I hate it. I know we’ve all been thinking it, but I’m the only one saying it: the cold? Not for me. If the cold was a guy, I’d sure like to kick his ass.

Being cold is up there with ‘violently ill’, ‘tortured’, ‘incontinent’, ‘falsely accused’, and ‘sad’ in terms of ‘terrible things to be’, and I’ve had it. I’m taking a stand. I’m going to stick it to the cold, and to hell with the consequences. In fact, I’d rather go to hell than endure these bitter Siberian winds any longer, since there’s no chance of it ever freezing over. That’s right dear reader, I’d go to hell just for you to feel a little catharsis in our collective struggle against the elements.

Here are the things I hate about the cold, in no particular order, because I hate every aspect of it equally: feeling cold; having to wear gloves that don’t work with my phone (even when you wear those ones from Uniqlo that are supposed to work but don’t (stop recommending me them)); forgetting my gloves; the fact I can’t whip my top off and display my neatly chiseled abs; the fact I might die if I don’t warm up in time; all the transport getting terminated and having to trudge 12 miles to my desk to write vital reportage with frostbitten fingers; can’t buy a Calippo without looking like a weirdo; having to make excuses at the urinal to everyone else in the gents’; having a cold and getting mucus all over my scarf; when everything goes numb and you no longer feel; kissing in the cold is grim - and I love to smooch!; shivering; Global Warming; the memory of my mum refusing to swap out the tiles in my childhood home for laminate flooring for what I can only presume was sadism disguised as aesthetic taste; seeing my weasley breath in the air; the fact my hands go really pale, then purple, then orange whenever it’s real cold and I look like some sort of chameleon freak who’s covered himself in UV paint; having people point out that I have Raynaud’s and that I need to go and get it checked out at the doctor’s because it means I have bad circulation which can be bad for the heart; the damn country being ground to a standstill because we’ve forgotten to stock up on grit; having to see other miserable cold people in the street, because I care.

Normally, when penning such excoriating takes, there is a wariness that you have to make your arguments ‘balanced’ so as not to blithely offend your audience with a thoughtless statement, but I won’t. If you’re someone who ‘likes’ the cold, who might respond to this going “stop having a go at the cold” and “my dad was cold, and he was a great bloke, take down this article ShortList” or anything which constitutes even a mild defence of being cold: go fuck yourself.

“Um, but ShortList, it won’t snow unless it’s cold! And snow is simply magical!” Let me just get one thing straight, you dangerous winter pervs: snow is dogshit. If you like chucking lumps of it about and having a general frolic, and you’re any age over ten, then you need to have a restraining order brought against you, to prevent you being within two miles of the general public any given time. I don’t want to be struck about the face with frozen rain, I’m not impressed you managed to meld a cold puddle into a ‘snowman’, and I absolutely will not go on a ‘skiing holiday’ with you, you monied ambulance-baiter.

Snow makes people fall over and irreparably crack their spine. You think that’s good, do you? Burdening our already overstretched healthcare system? All the cars skidding on ice, crashing and killing people? That’s a laugh, is it? People starving to death because they get snowed in by a blizzard and ran out of supplies? Aye, very magical, ya Bing Crosby-addled dimwit.

All these Arctic explorers, what’s their deal? “Ooh, get me, I’m going to endure the most amount of cold to be the first person to plant a flag in the middle of absolutely nowhere.” Utter buffoons. You know what? I’m glad Captain Oates died. What a total cold-bothering clown. Just going outside and might be some time? Well don’t come back until you find a normal hobby, bucko.

You know the worst thing about cold? It’s not even hypothermia, or that fact you can’t sleep without three duvets (and who the Sam Heck has three duvets?), but the way it goes beyond pain. It’s not just a physical experience, it’s a social one too. See, every time I’m cold, I find one of the only ways I can deal with it is to loudly announce “I’m cold” over and over again, in the hope someone will somehow ease the burden of feeling cold. It doesn’t work. I remain cold and alienate all my friends and family with my incessant whining. On top of everything else, it’s causing me severe aches of the heart, which I can’t even feel, on account of how cold it is.

Well you know what? Enough. This leads me to my final strong opinion.

There’s only one good temperature, and that’s ‘room temperature.’ I want it to be room temperature always, including outside. Think about how sick that would be. Nobody freezes to death, nobody gets sunburnt, everybody just feels comfortable everywhere, because everywhere feels like home.

We spend so much time warring with one another, when really we need to unite against one common enemy: the cold. Let’s pool the world’s resources and militaries together and shoot the cold into oblivion. I’m not so arrogant to think that one little article will change the course of history, but if I can convince just one person that we should fire all of our nukes at the Ozone layer in the hope that it might cause the planet to heat up enough that we’ll vanquish the cold forever, then it’s all been worth it.